Scientific Name: Vaccinium stamineum
Taxonomy Group: Vascular Plants
COSEWIC Range: Ontario
COSEWIC Assessment Date and Status Change: November 2020
COSEWIC Status: Threatened
COSEWIC Status Criteria: Meets criteria for Endangered, B1ab(i,ii,iii,iv,v)+2ab(i,ii,iii,iv,v), but designated Threatened, B1ab(i,ii,iii,iv,v)+2ab(i,ii,iii,iv,v), because the species is not at risk of imminent extirpation.
COSEWIC Reason for Designation: This long-lived shrub is found in Canada only in the Niagara and Thousand Islands regions of Ontario, at the northern edge of its range. Restoration and management efforts have resulted in a new subpopulation at Thousand Islands National Park. Other remaining subpopulations are currently threatened by shading (caused by fire suppression) and browsing by White-tailed Deer. One subpopulation is currently very small and not expected to persist. While meeting criteria for Endangered, this species was designated Threatened because four of the five extant subpopulations are protected through conservation stewardship and management actions in recent years that have benefited the species. The long-term persistence of this species depends on continued conservation efforts.
COSEWIC History of Status Designation: Designated Threatened in April 1994. Status re-examined and confirmed in November 2000 and November 2020.
SARA Status: Schedule 1, Threatened
Date of Listing (yyyy-mm-dd): 2003-06-05 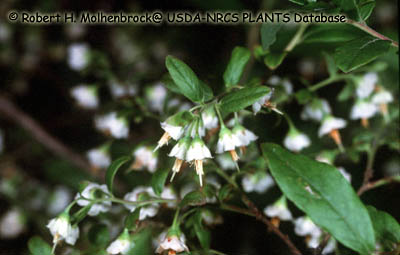 Deerberry is an upright, spreading, deciduous shrub that belongs to the heath family and is quite closely related to blueberries and cranberries. I t is a low-lying shrub, rarely growing over one meter tall. Its oval-shaped, alternate leaves are dark green on top and a whitish underneath, and have untoothed edges. Young twigs are hairy but become smooth and develop peeling, papery bark through time. Deerberry flowers in early summer. Clusters of pendant white flower are attached to long slender stalks. The fruit is a greenish to bluish juicy berry that falls upon ripening; it contains a few soft seeds.

Deerberry occurs across the eastern United States from New York State, Ohio, and Missouri south to Florida and easternmost Texas. In Canada, it occurs in southern and southeastern Ontario. In 1992, Deerberry was known to occur in two areas in Canada: the Niagara River near Niagara Falls in southern Ontario, and the Thousand Island area in the St. Lawrence River in southeastern Ontario. Since 1992, one new population has been discovered close to the location of a population that was previously known but had disappeared. Since 2001, there are six known Canadian populations (two near the Niagara River and four in the Thousand Islands area). Deerberry may have been common in the Niagara area when it was first collected in 1798. The area has since been disturbed by development. Due to clonal growth the easiest way to estimate Deerberry population size is by counting clumps. Previously, there was no evidence that the species was expanding at any of its Canadian sites. The 2001 estimate from the Niagara Region indicated that there are two clumps of Deerberry, with the population declining over the last decade. In the Thousand Islands region, the 2001 population estimate is 15 clumps, and has remained relatively stable since the 1960s.

Deerberry is found in the areas of Canada that have the warmest climates and longest growing seasons in the country. The climate is moderated year round by their proximity to the Niagara and St. Lawrence rivers and to Lake Ontario. Within these areas, deerberry inhabits dry open woods near the Niagara River and on islands in the St. Lawrence River. The species occurs on sandy and well-drained soil, and some sites where Deerberry is found have a history of fire.

Deerberry is pollinated by insects and its fruit usually ripen by August. The shrub spreads in two ways: through seed dispersal by birds and animals, and by vegetative reproduction from its rhizome (underground stem that is usually horizontal and has roots growing from below and stems from above). Deerberry often occurs in burned areas in the United States. It is thought that fire may be important in both seed germination and the control of other shrubs and trees that compete with it. In Canada, Deerberry populations produce seed but seedling establishment is not apparent.

The main limiting factor for Deerberry is unknown. Lack of suitable climactic conditions, fire suppression, lack of dispersal, low seedling recruitment, lack of genetic diversity, and habitat disturbance and fragmentation may all play a role. The Niagara area is one of the most highly developed areas of Canada. In addition, populations in the St. Lawrence Islands National Park and one of the Niagara River populations occur next to well-used trails and are at risk from both trampling and trail maintenance. The population that has most recently been discovered is at risk from mowing by a private landowner.

Summary of Progress to Date Niagara and Thousand Islands, the two Ontario Deerberry habitats, have been considered separately during recovery activities to ensure that they receive site specific restoration initiatives. St. Lawrence Islands National Park has been educating park visitors about Deerberry for many years and has a Deerberry recovery plan for the park. The recovery plan includes having seedlings grown, transplanting them, caring for them, and monitoring them. The program is small, but successful, with a survivorship of 73% over the period from 1993-2000. As a result of landscape-level genetic research, there is better understanding of the species’ means of reproduction and its genetic diversity throughout its range. Summary of Research/Monitoring Activities Deerberry, and other species at risk, are being inventoried and mapped in areas of the Niagara River Gorge and Thousand Islands. Genetic analysis of the Niagara and Thousand Islands populations are underway and aim to determine the mode of reproduction and the genetic differences between the two populations. Experimental propagation techniques have determined that Deerberry can readily be grown from seed. Deerberry cuttings are being grown at the Parks Commission Gardening School. Maintaining the seedlings, which are grown in pots for the first two years, can be difficult. It is critical that the young plants be cared for several years before and after they have been planted in their permanent site. Summary of Recovery Activities The Deerberry is one of many species at risk included in the Niagara River Gorge Ecosystem Restoration Plan. This project targets multiple species at risk in order to sustain the overall ecological integrity of the threatened ecosystem. Signs have been posted in the Niagara Glen/Whirlpool area to inform trail users about the risks of their actions on nearby species at risk, such as the Deerberry, and to promote a stewardship ethic. The entrances to the trails are being relocated to completely avoid Deerberry habitat and to preserve and protect the known species at risk habitat. The self-sustaining Thousand Islands population and its suitable habitat are being maintained by preventing development and urbanization from destroying more of the natural vegetation of the region. Re-introduction and site restoration is taking place at the St. Lawrence Islands National Park and Niagara National Historic Site. Seedlings have been successfully transplanted at Grenadier and Lyndoch Islands and are carefully being monitored by staff from St. Lawrence Islands National Park. URLs Ontario’s Biodiversity: Deerberry: http://www.rom.on.ca/ontario/risk.php?doc_type=fact&id=26