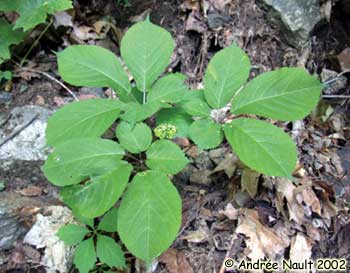 The American Ginseng is a long-lived, perennial herb which measures 20 to 70 cm in height. The root of this plant resembles a carrot; above the root, there is a horizontal rhizome. The stem ends in several compound leaves and a centrally located flower. The flower is greenish-white; it develops into bright red berries. There may be more than one stem on a plant, and there are sometimes flowers near the base of the flowering stalk. The American Ginseng has medicinal properties similar to those of the Oriental Ginseng. It has been used in North America for a long time; native people used it to treat coughs, headaches, rheumatism and fevers.

The plant occurs in the United States, from New England south to Louisiana and Georgia. In Canada, it occurs in southern Ontario and southwestern Quebec. It is considered to be rare or uncommon in most of its North American range. In Ontario, concentrations occur along the Niagara Escarpment and the eastern edge of the Precambrian Shield. In Quebec, most sites occur in Monteregian, south of Montreal. The species' range in Quebec has been reduced at its north-eastern limit. There are 139 records for ginseng in Canada, 65 in Ontario and 74 in Quebec. Of 20 Ontario sites checked between 1996 and 1998, 25% had disappeared and 50% had declined. Similar results (i.e., 27% extirpation) were obtained from 22 new sites surveyed in 1997 and 1998. Only seven viable populations are known in Ontario, with a total of 8619 plants. Seventy percent of these plants were found in the two largest colonies. In Quebec, most of the 15 populations are small and dispersed in a fragmented landscape where habitat loss and degradation are high. Nearly 50% of the 10,956 plants are found in two large colonies, only one of which is protected.

In Canada, ginseng grows in rich, moist, undisturbed and relatively mature deciduous woods in areas of neutral soil (such as over limestone or marble bedrock). The forest canopy is usually dominated by Sugar Maple, White Ash, Bitternut Hickory, and Basswood. Colonies of ginseng are often found near the bottom of gentle south-facing slopes, where the microhabitat is warm and well-drained.

Ginseng is a long-lived forest perennial. A new bud is formed on the rhizome of ginseng in late summer or early fall; this bud will produce a new stem the following year. Ginseng plants begin flowering when they are three to eight years old; they then flower annually. Flowering begins in June and continues until August. The fruit develop from July to August and ripen in August and September. It is possible for a flower cluster to have flowers and fruit at the same time. Ginseng reproduces mainly through seeds, though rhizome fragmentation has been reported. Most seeds fall close to the parent plants; dispersal of seeds far from the parent plant is done by birds. Ginseng seeds lie dormant for 18 to 22 months before germinating. A seed has only a 0.55% chance of reaching maturity. The Minimum Viable Population Size for ginseng is estimated to be about 170 plants.

In Canada, the main limiting factors for ginseng are small population size, habitat loss and degradation from clearing and logging, and over-harvesting. Small populations are very vulnerable to changes in the environment. Habitat destruction or modification occurs because of forest clearing, urban development and the expansion of agricultural lands. Logging, which opens the canopy and impacts on the ecology of the whole forest, contributed to the loss or decline of 25% of sampled sites in Ontario. In Quebec, seven populations succumbed to habitat loss and degradation. Harvest severely reduces the reproductive potential of the colonies - even a 5% annual root harvest will bring a viable ginseng population toward extirpation. Export of wild roots is banned. Woodland cultivation is becoming increasingly popular, resulting in habitat disturbances associated with site preparation and maintenance and the introduction of seed-borne pathogens and foreign genes.

The American Ginseng is protected by the Quebec Act Respecting Threatened or Vulnerable Species. Under this Act, it is prohibited to possess, trade, or harm this species, or to disturb its habitat.

American Ginseng is included in Appendix II of the Convention on International Trade in Endangered Species of Wild Fauna and Flora (CITES), which sets controls on the international trade and movement of species that have been, or may be, threatened due to commercial exploitation.

Summary of Progress to Date Due to outreach initiatives, awareness of the endangered status of American Ginseng and its vulnerability to even a small amount of harvesting has grown. However, wild American Ginseng populations have declined rapidly over the last couple of decades due to both legal and illegal harvesting and habitat degradation and loss, thus recovery efforts for this species are urgently needed. Summary of Research/Monitoring Activities Surveys have been conducted to identify remaining wild populations of ginseng, their status, and local threats. This information has been used to design both landscape level and site-specific protection and recovery measures. Ginseng populations in Quebec and Ontario are monitored annually in order to monitor the effectiveness of conservation measures. Results of studies of ginseng habitat requirements are being applied in the identification of sites that may be suitable for reintroduction. Ginseng cultivation is an expanding industry in Canada, for which non-native ginseng has been imported. It is difficult to visually distinguish native, endangered ginseng, from cultivated non-native ginseng. Therefore, researchers are investigating the genetics of ginseng to assess the effectiveness of a molecular method for distinguishing ginseng subspecies or strains. Some ginseng cultivation takes place in woodlots. As a result, a study is taking place on the impacts of forestry activities on wild American Ginseng. Summary of Recovery Activities American Ginseng habitat is protected in several parks and reserves in Quebec and Ontario; however, illegal harvest of the plant remains a significant threat. Relocating trails to avoid ginseng and relocating ginseng plants away from trails have both been attempted. Many American Ginseng sites in Ontario and Quebec occur on private land, thus stewardship by landowners and land managers is necessary for the species’ recovery. Therefore, researchers and landowners are working together to prepare and implement detailed plans to protect key ginseng populations that occur on private lands. Ginseng propagation techniques have been successfully developed at the Biodome in Montreal and ginseng is grown there for possible future reintroductions. Sites for potential reintroduction would be selected based on suitable habitat as well as security from illegal harvest. Ginseng from the Biodome population has been used to augment ten wild populations that were considered at risk of extirpation. http://www.nps.gov/plants/medicinal/pubs/ginseng.htm http://www.bioone.org/bioone/?request=get-document&issn=0003-0031&volume=149&issue=02&page=0282