Scientific Name: Tephrosia virginiana
Other/Previous Names: Goat's-rue
Taxonomy Group: Vascular Plants
COSEWIC Range: Ontario
COSEWIC Assessment Date and Status Change: November 2009
COSEWIC Status: Endangered
COSEWIC Status Criteria: B1ab(i,ii,iii,iv,v)+2ab(i,ii,iii,iv,v); C2a(ii)
COSEWIC Reason for Designation: A species of restricted geographical occurrence in Canada present as two remaining populations within remnant Black Oak savanna and Black Oak woodland habitats in southwestern Ontario. These habitats are globally rare and are one of the most threatened ecological communities in Canada. Most of the fewer than 600 plants are present as a single population within two nearby protected areas. Here the species is at risk from habitat degradation through successional changes. The very small second population, found on private land, is at risk of loss due to erosion of its sandy dune habitat.
COSEWIC History of Status Designation: Designated Threatened in April 1996. Status re-examined and designated Endangered in May 2000 and November 2009.
SARA Status: Schedule 1, Endangered
Date of Listing (yyyy-mm-dd): 2003-06-05 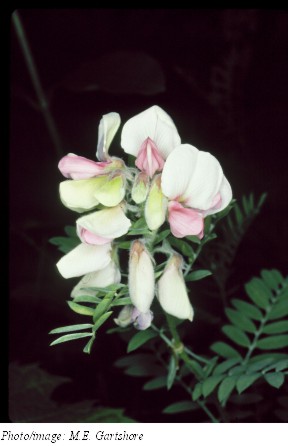 Virginia Goat’s–rue (Tephrosia virginiana) is an erect perennial herb in the pea family (Fabaceae). Its stems generally reach 30 to 70 cm in height and arise from a branched woody crown and slender tough woody roots. Its stems, branches, and leaf stalks are densely covered with fine whitish hairs. The compound leaves are alternate, short–stalked, and bear an odd number of pinnately–arranged leaflets. Flowers are typical pea–like in appearance and bicoloured; the larger upper petal is yellow to cream–coloured, with the smaller lateral petals and lower keel being pink to pale purple. Fruits are hairy, flattened, linear pods ranging in size from 3.5 to 5.5 cm containing 6 to 11 kidney–shaped seeds. (Updated 2017/05/31)

Virginia Goat’s–rue is limited to eastern and central North America, centred in Tennessee and Kentucky, ranging as far south as Texas and Florida. It is found as far west as Nebraska and north to Minnesota. In Ontario, Virginia Goat’s–rue is at the northern limit of its global range. It is limited to a small area of southern Ontario on the north shore of Lake Erie. The present range of Virginia Goat’s–rue in Canada extends over an area of about 10 km². The actual area of habitat occupied is roughly 0.16 ha or 0.002 km². The Index of Area of Occupancy based on a 2x2 km grid is 20 km². (Updated 2017/05/31)

Throughout its range, Virginia Goat’s–rue is found in a variety of oak or pine woods, oak savanna, pine barrens, as well as sand prairies, sand dunes and open sand barrens. In Ontario, Virginia Goat’s–rue is limited to acidic sand deposits of the Norfolk Sand Plain in remnant Black Oak savanna and open Black Oak woodland. Trends suggest overall habitat reductions throughout its range, including oak savanna in Ontario, one of the most endangered ecological communities in Canada. (Updated 2017/05/31)

Virginia Goat’s–rue is a perennial flowering herb that produces flowers and fruit many times over the course of its lifetime; it flowers from late June through July in Ontario. The species may be self–pollinated but also appears adapted to bee pollination. Plant lifespan is not known, but the deep, woody taproots indicate longevity. Virginia Goat’s–rue is drought and fire adapted, possessing deep woody roots most likely with nitrogen fixing abilities. (Updated 2017/05/31)

The main limiting factor affecting Virginia Goat’s–rue in Canada is lack of suitable habitat. Direct threats are relatively minor and include trampling and mowing within the Turkey Point Natural Area, and erosion, a more serious threat, at Vittoria Dune Ridge. Indirect threats are more severe overall, and include habitat succession and lack of disturbance for many sub–populations. At present, invasive species are a minor threat, although in the long–term they could become a more serious threat. (Updated 2017/05/31)