Scientific Name: Castilleja levisecta
Taxonomy Group: Vascular Plants
COSEWIC Range: British Columbia
COSEWIC Assessment Date and Status Change: November 2007
COSEWIC Status: Endangered
COSEWIC Status Criteria: B1ab(iii,v)+2ab(iii,v)
COSEWIC Reason for Designation: The species is a perennial hemiparasitic herb of maritime meadows found within the Garry oak ecosystem of southeastern Vancouver Island. The species has lost most of its historic populations, having once been known from 7 locations. One small population was extirpated in recent years. The species is presently reduced to two populations on two small islands in the Victoria area. The spread of invasive alien plants continues to place the species at risk on Trial Island.
COSEWIC History of Status Designation: Designated Threatened in April 1995. Status re-examined and designated Endangered in May 2000 and in November 2007.
SARA Status: Schedule 1, Endangered
Date of Listing (yyyy-mm-dd): 2003-06-05 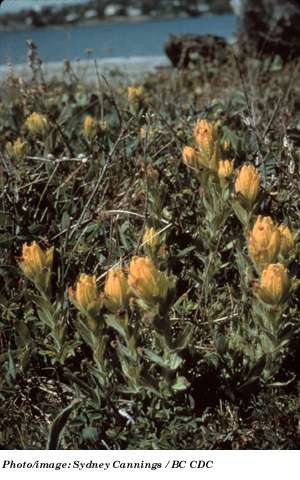 Golden Paintbrush is a perennial herb that grows 10 to 50 cm tall. It usually has several clustered stems growing from a common base. Individual plants produce one to three sticky flowering shoots with long, soft hairs. The leaves are downy and are arranged alternately along the stem. The lower leaves have no teeth or lobes and are long and narrow, while the upper leaves are somewhat oval-shaped, with one to three short lobes on each side. The flowers, which are small, are clustered at the end of the shoot in a spike largely concealed by golden yellow bracts (specialized leaves). These bracts are hairy, blunt and about as wide as the upper leaves. The flower petals are fused in a tube with a two-lipped structure at the end. The upper lip is beaklike and is three or four times longer than the lower lip. The fruit is a dry capsule that contains 70 to 150 minute seeds.

The range of Golden Paintbrush runs from Vancouver Island in Canada west of the Cascade Mountains to northwestern Oregon in the United States at low elevations. In Canada, the species is restricted to the Gulf Islands, the small islands offshore of Victoria, British Columbia. Golden Paintbrush has been reported from eight locations in Canada, only two of which have extant populations. According to the most recent data, there was a total of 3361 flowering plants in 2006. This appears to represent a population decrease of about 25% since the mid-1990s, primarily on Alpha Islet. The potential for rescue effect is slight, since nearby populations in the United States are small and are separated by about 10 km of open ocean; in addition, the seeds are poorly adapted to long-distance transport.

Golden Paintbrush is restricted to maritime meadows. In Canada, these low-elevation (under 30 m) habitats are confined to southeastern Vancouver Island and the adjacent offshore islands. Summer temperatures are greatly moderated by the proximity of these sites to the ocean. Coastal fogs and the proximity to the water also tend to moderate winter frosts and reduce the build-up of heat (heat may slow down the development of plants). These regions are also characterized by summer droughts and low annual precipitation.

The plant enters dormancy in July, when drought sets in. Shoot dormancy begins to break as early as mid-September, when the soil becomes moist. By January, most shoots have broken dormancy. Shoots begin to grow in March. Flowering peaks in April and May, although flowering usually continues into June. Seed set is critical for Golden Paintbrush, since it is the plant’s only known method of reproduction. The species likely reproduces by cross-pollination (its flowers must be fertilized by pollen from other flowers). Green fruit develop from May to July, and ripe, unopened fruit are usually present from July to early September. Seeds are gradually shed until late November or December, at which point most of the ripe seeds have dispersed. Each fruit capsule typically contains over 100 minute seeds. The seeds lack adaptations to assist in long-distance dispersal. They appear to be shed when wind shakes the ripened fruit. Like other species in the genus Castilleja, Golden Paintbrush is a facultative parasite on the roots of other plants. For example, related species are capable of completing their life cycle in the absence of a host, but most individuals exhibit faster growth rates when they have root connections with another species. Castilleja species obtain supplementary water and nutrients by forming special root-like connections that attach to the roots of host plants. In certain areas, Golden Paintbrush may be an important host plant for Taylor’s checkerspot, a nationally endangered butterfly.

The destruction of maritime meadows is the main factor limiting Golden Paintbrush populations. The amount of potential habitat on southeastern Vancouver Island and the adjacent offshore islands has decreased greatly over the past century as maritime meadows have been developed for residential and recreational use. The historical range of Golden Paintbrush in Canada lies at the heart of one of North America’s fastest-growing regions. As a result, there will be continued pressure to develop maritime meadow habitat capable of supporting the species. Fire suppression and the introduction of exotic species are also contributing to the extirpation of Golden Paintbrush. In the past, burning by First Nations to improve food crops maintained these maritime meadows. Fire suppression now favours the growth of dense patches of native shrubs and trees where Golden Paintbrush cannot survive. Several introduced species, including Scotch broom, gorse and English ivy, have invaded maritime meadows, forming dense thickets that overshadow native species and modify soil conditions. On Trial Island, Golden Paintbrush continues to be threatened by the spread of invasive alien plants. The decline and eventual extirpation of Golden Paintbrush at Beacon Hill Park appears to have been hastened by summer mowing, which removed flowers before they had matured. The last remaining plants were growing in what is still an open meadow apparently capable of supporting Golden Paintbrush. The threat posed by grazing is poorly known, because both of the extant Canadian populations are on small islands with no mammalian herbivores. Certain insects and other arthropods may feed on these plants, but damage is usually slight. However, herbivory may have contributed to the loss of Canadian populations in the past. Marine pollution may pose a threat to Golden Paintbrush in Canada because both extant populations occur just above sea level along the most crowded and heavily used shipping lanes in North America north of San Francisco.