Scientific Name: Azolla mexicana
Other/Previous Names: Mexican Mosquito Fern
Taxonomy Group: Vascular Plants
COSEWIC Range: British Columbia
COSEWIC Assessment Date and Status Change: November 2008
COSEWIC Status: Threatened
COSEWIC Status Criteria: B1ab(iii,iv,v)+2ab(iii,iv,v)
COSEWIC Reason for Designation: This tiny floating aquatic fern of south-central British Columbia is restricted to 8 small water bodies where its populations undergo periodic fluctuations in numbers of individuals. Two populations and their habitat have been lost in recent years due to construction activities with most of the extant populations occurring adjacent to major highways or a railway where they are at potential risk from maintenance activities, including the use of chemicals such as road salt.
COSEWIC History of Status Designation: Designated Threatened in April 1984. Status re-examined and confirmed in April 1998, May 2000, and November 2008.
SARA Status: Schedule 1, Threatened
Date of Listing (yyyy-mm-dd): 2003-06-05 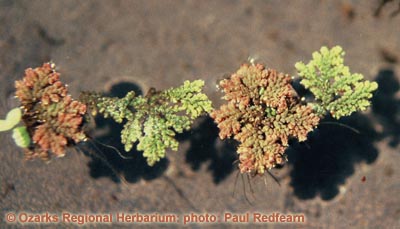 Mexican Mosquito-fern Azolla mexicana is a tiny floating aquatic fern found in wetlands and small wet areas. Individual plants range in size from 1-2 cm in length. Leaves are tiny and overlap like shingles. Spore-producing structures, borne below the water surface, are present in the Canadian populations. Roots are simple and short. Plants usually have three “floats”. This species forms extensive green or red mats on the water surface. (Updated 2017/01/20)

The natural range of Mexican Mosquito-fern is North, Central and South America (from Peru, northern Bolivia and Brazil north). In Canada, it is restricted in occurrence to British Columbia, where it occurs at the northern tip of its range. The eight extant British Columbia populations occur in three regions: the Little Fort area, the Shuswap Lake area, and Vernon. The extent of occurrence is 5400 km² and the area of occupancy for the small fragmented water bodies is 11 km² based on a 1 x 1 km grid and 40 km² based on a 2 x 2 km grid. (Updated 2017/01/20)

This aquatic fern grows in a symbiotic relationship with a species of bluegreen alga (a cyanobacterium) Anabaena azollae. Primary reproduction is through fragmentation of plants. Secondary reproduction is sexual through spore production. This is a heterosporous fern: two types of spores (of different sizes and appearance) are produced that fall to the bottom of water bodies and eventually germinate, producing new plants. Dispersal is by wind, waterfowl, and accidentally by humans. (Updated 2017/01/20)

Mexican Mosquito-fern is naturally limited by factors such as water chemistry and temperature, which restrict its range in British Columbia. Threats to the populations include road repairs and construction, housing / urban development, accidental spills on roads and railways (which can influence water chemistry and could cause complete population die-off), invasive species, and eutrophication of sites. (Updated 2017/01/20)