This small showy orchid of rich woodland soils undergoes variable periods of dormancy. In Canada, this species is known from only two populations in southwestern Ontario, one of which has not been observed in more than 20 years. About 1400 flowering stems were documented at one site in 2008 during a year of high rainfall, in contrast to a decade previously when the Canadian population was documented as consisting of only 50 individuals. Although grazing by deer has been reduced, invasive plants have contributed to a loss in habitat quality and exotic earthworms are likely the cause of the reduction of the organic layer of the forest floor. Chance events could also impact the population.
COSEWIC History of Status Designation: Designated Threatened in April 1988. Status re-examined and designated Endangered in April 1999. Status re-examined and confirmed in May 2000 and November 2010.
SARA Status: Schedule 1, Endangered
Date of Listing (yyyy-mm-dd): 2003-06-05 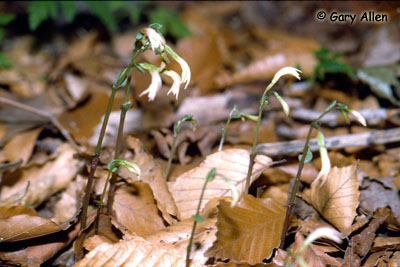 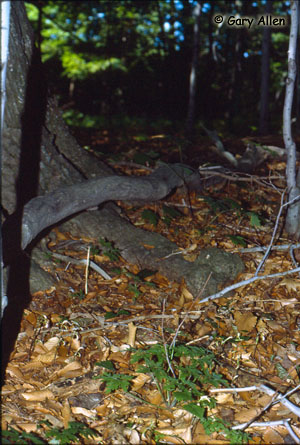 Nodding Pogonia (Triphora trianthophoros) is a small orchid that persists mainly as an underground rootstock, sending up flowering shoots only in favourable years. It forms colonies through asexual reproduction by small tubers formed from the ends of its fleshy roots. The greenish–purple aerial shoots vary in height from 5 to 31 cm. One to several small, alternate, round clasping leaves are attached on the stem from about midway to the base of the inflorescence. Plants commonly produce three flowers, each subtended by a leafy bract. The corolla consists of a central, lower lip, bearing three greenish crests, and two dorsal petals. The three sepals are white and petal–like. Fruit is an erect green capsule. The species is of special interest because it depends on mycorrhizal fungi for its nourishment. Its irregular appearance above ground depends on environmental conditions that are not well understood. It is also one of the rarest orchids in Ontario. No recorded traditional Aboriginal uses for this species are known. (Updated 2017/05/30)

Nodding Pogonia occurs in North America from New England westward to southwestern Ontario and Michigan south to Texas and Florida. In Canada, it is found at only two sites, Rondeau Provincial Park (Municipality of Chatham–Kent) and a site on private property (Essex County). The Canadian range of the species extends over an area of only about 62 km². (Updated 2017/05/30)

The species requires rich, moist, deciduous forest with a deep leaf litter and an abundance of humus. In Canada, it grows in beech–maple forests with a sparse understorey. It tolerates a wide range of soil types and acidity, but requires association with a mycorrhizal fungus, probably from the genus Rhizoctonia. (Updated 2017/05/30)

Nodding Pogonia is a small and inconspicuous orchid that only shows above ground in late summer when it begins its short flowering period. It derives most of its nourishment from its fungal associates, and it grows above ground only to produce flowers and seeds. If conditions are unfavourable for flowering in a particular year, flowering stems may not be produced. Nodding Pogonia is pollinated by bees in at least two different orders. Production of seed capsules in Nodding Pogonia is generally low. Plants also propagate vegetatively by means of underground tuberoids. Colonies may be long–lived; a New England colony has continuously persisted for over 70 years. (Updated 2017/05/30)

Invasive plant species such as Japanese Barberry (Berberis thunbergii) and Garlic Mustard (Alliaria petiolata), as well as exotic earthworms, may threaten Nodding Pogonia. Herbivory by deer, chipmunks and slugs is possible at either site, and is a known threat to other populations in the United States. The single privately owned site could be threatened by a change in land use or management. Trampling of Nodding Pogonia may be a minor threat. (Updated 2017/05/30)