Scientific Name: Sabatia kennedyana
Taxonomy Group: Vascular Plants
COSEWIC Range: Nova Scotia
COSEWIC Assessment Date and Status Change: November 2012
COSEWIC Status: Endangered
COSEWIC Status Criteria: B1ab(iii,v)+2ab(iii,v)
COSEWIC Reason for Designation: This showy perennial lakeshore plant has a restricted global range with a disjunct distribution limited to southernmost Nova Scotia. There is a concern regarding potential widespread and rapid habitat degradation due to recent increases in levels of phosphorus in lakes, tied to a rapidly growing mink farming industry. Though the population size is now known to be larger than previously documented due to greatly increased survey effort, the species is also at risk due to the continuing impacts associated with shoreline development, and historical hydro-development.
COSEWIC History of Status Designation: Designated Threatened in April 1984. Status re-examined and confirmed in April 1999 and May 2000. Status re-examined and designated Endangered in November 2012.
SARA Status: Schedule 1, Endangered
Date of Listing (yyyy-mm-dd): 2003-06-05 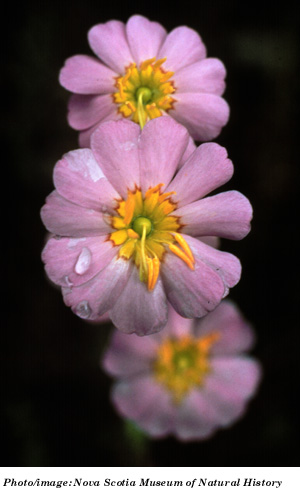 Plymouth Gentian is an herbaceous perennial with single, erect, flowering stems 30 to 50 cm tall arising from a basal rosette of narrow (oblanceolate) leaves 3 to 8 cm long. Basal rosettes produce short green stolons which form new rosettes at their tips. Clusters of interconnected rosettes are frequently produced. Erect stems have opposite leaves and one to three (rarely up to five) 5 cm-wide flowers of 7-13 pink petals with yellow bases. Plymouth Gentian is a globally rare species, co-occurring in southern Nova Scotia with a suite of rare, disjunct species of the Atlantic Coastal Plain. Nova Scotia populations are 400+ km from the nearest sites in Massachusetts. An investigation of genetic diversity suggests that Nova Scotia populations may have a disproportionate significance to the species. The attractive flowers provide cottagers and the public with an easily appreciated reason for good stewardship of habitats supporting rare Atlantic Coastal Plain species. [Updated by COSEWIC - Nov. 2012]

Plymouth Gentian has a very limited global range with three highly disjunct areas of occurrence: 1) along the North Carolina – South Carolina border near the Atlantic Coast; 2) in coastal regions of Massachusetts and Rhode Island; and 3) in extreme southwestern Nova Scotia on the shores of ten lakes in three river systems (Annis, Carleton and Tusket rivers), all of which flow into the Tusket River estuary. Roughly 10% of its global range is in Canada. [Updated by COSEWIC - Nov. 2012]

In Nova Scotia, Plymouth Gentian occurs on lakeshores (rarely river shores) on sand, gravel and peat substrates, within the zone annually or semi-annually exposed in summer but where winter flooding protects plants from freezing. Plymouth Gentian is associated with lakes having especially large upstream catchment areas because the greater fluctuations in water level, wave action and ice scour limit shoreline fertility and inhibit more competitive species. In New England, Plymouth Gentian is mostly found on sandy, gravelly or muddy shores of small kettle ponds. In the Carolinas, the species occurs on river and pond shores and in acidic swamps. [Updated by COSEWIC - Nov. 2012]

Plymouth Gentian is a clonal perennial that reproduces by seed, by stolons producing daughter rosettes, and by vegetative fragments moved by ice and water. In Canada, it flowers from mid-July to late September. It is pollinated by a range of generalist pollinators and is self-compatible. Each flower can produce 300-1,40 0 tiny seeds released in early fall. Dispersal is likely largely by water as seeds can float for at least a day. Seed banks of unknown longevity are reported as very important for persistence in Massachusetts and are present in Nova Scotia, but may be lessimportant there because of more stable habitats. Rosettes grow for two to five or more years and die after flowering, but longevity of genetic individuals is unknown. Generation time, factoring in reproduction by seed and by vegetative means, may be approximately five years. [Updated by COSEWIC - Nov. 2012]

Eutrophication is the most serious threat to Plymouth Gentian. One small population (Lake Fanning) appears to already be stressed by competition induced by eutrophication associated with mink farming. The nutrient-demanding invasive exotic Reed Canary Grass is established on this lake and is an imminent threat to Plymouth Gentian. Eutrophication (600-800% increases in total phosphorus between 2002 and 2011, possibly from a single mink farm) was detected throughout the Tusket River system in 2011, affecting lakes containing 98% of the Canadian population. No impactson Plymouth Gentian in Tusket system lakes have yet been observed, but phosphorus levels in some Tusket lakes are approaching those at Lake Fanning. Shoreline development is a widespread, ongoing threat affecting a small portion of the population. The species occurs on the shorelines of 200+ cottage or residential properties. About 27% of the population is on undeveloped private shorelines. New development continues, including within the densest Canadian population. Population losses from cottage development in the past 15 years (three generations) are likely significantly less than 2.8%. About 38% of occupied habitat and 32% of the population is now in protected areas, somewhat mitigating development threats. Hydroelectric dams on the lower Tusket River significantly reduced populations around 1929 and may be limiting recovery in affected lakes, but new dams are not a threat. Off-highway vehicles are locally affecting plants but do not appear to have major population effects. [Updated by COSEWIC - Nov. 2012]