This small inconspicuous orchid extends across southern Ontario to southwestern Quebec as a series of scattered populations. The discovery of several new populations in recent years has extended its known range in Canada. The few individuals present in the majority of the populations and the overall small size of the entire Canadian population places the species at continued risk from chance events.
COSEWIC History of Status Designation: Designated Threatened in April 1989. Status re-examined and designated Endangered in April 1999 and in May 2001. Status re-examined and designated Threatened in November 2010.
SARA Status: Schedule 1, Threatened
Date of Listing (yyyy-mm-dd): 2003-06-05 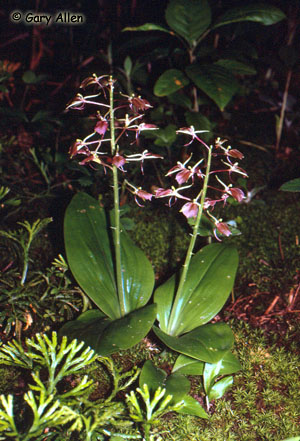 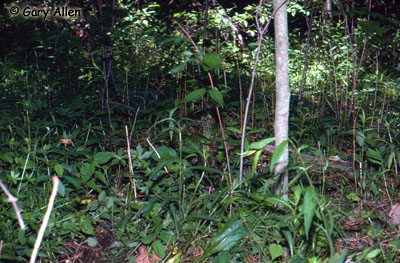 Purple Twayblade (Liparis liliifolia) is a terrestrial perennial orchid whose leafy flowering shoot develops from a bulbous corm. The plant attains a height of about 25 cm. The flowering stalk of five to 33 flowers arises from the centre of two oval to elliptic fleshy leaves. Flowers consist of a prominent, broad violet-mauve lip (10-14 mm long) streaked with a fine network of reddish-purple veins. The two lateral petals are linear to thread-like and greenish to pale purple. Three greenish-white narrowly lanceolate sepals surround the petals. The fruit develops into an erect ellipsoid capsule about 15 mm long. Because Purple Twayblade is a rare orchid, it is of considerable interest to naturalists and photographers. (Updated 2017/05/30)

Purple Twayblade occurs in the United States from New England and Minnesota south to Arkansas and Alabama. The Canadian distribution was previously believed to be limited to southwestern Ontario. However, two new records in the last decade have extended the Canadian range of Purple Twayblade into eastern Ontario and southwestern Quebec. It has also been recently reported on Pelee Island. (Updated 2017/05/30)

Purple Twayblade is found in a wide variety of plant communities and soil conditions. Although it is generally found in dry to mesic conditions, it has recently been reported from wetlands in Canada. Canadian occurrences are from open oak woodland and savannah, mixed deciduous forest, shrub thicket, shrub alvar, deciduous swamp, and conifer plantation. The presence of a specific fungal associate may be more important than substrate conditions. (Updated 2017/05/30)

Purple Twayblade is an early colonizing species found in woodlands and also in a variety of disturbed sites. Plants are self-incompatible and flowers require cross-pollination to produce viable seed. Flowers are pollinated by flies, although the species is not known. As with most orchids, capsules produce a large number of tiny, dust-like seeds that are dispersed by wind and possibly by water. Developing protocorms require association with a mycorrhizal associate in order to survive. (Updated 2017/05/30)