Scientific Name: Morus rubra
Taxonomy Group: Vascular Plants
COSEWIC Range: Ontario
COSEWIC Assessment Date and Status Change: November 2014
COSEWIC Status: Endangered
COSEWIC Status Criteria: B2ab(ii,iii,iv,v); C2a(i); D1
COSEWIC Reason for Designation: This small to medium-sized tree from Carolinian forests of southern Ontario has declined in numbers of mature individuals and subpopulations since the last COSEWIC assessment in 2000. Only 217 total individuals are known to occur in Canada, and only 105 of these are considered of reproductive age. Only four subpopulations have more than five reproductive individuals. The greatest threat to the species is hybridization with the non-native White Mulberry. Effects of twig canker diseases also contribute to declines. At two sites, nesting by Double-crested Cormorants poses a significant threat.
COSEWIC History of Status Designation: Designated Threatened in April 1987. Status re-examined and designated Endangered in April 1999. Status re-examined and confirmed in May 2000 and November 2014.
SARA Status: Schedule 1, Endangered
Date of Listing (yyyy-mm-dd): 2003-06-05 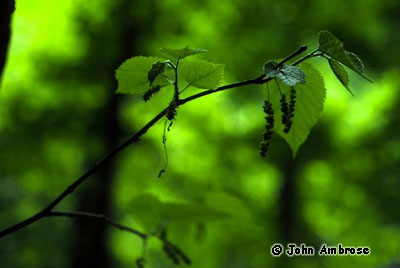 The Red Mulberry is a small to medium-sized tree which typically reaches heights of 6 to 18 m. The bark on mature trees is light brown with loose vertical plates. The leaves measure 8 to 24 cm in length; they are heart-shaped, roughly textured on the upper surface, and have a long tapered tip. The sap in the leaves is milky. The flowers are found in yellow-green to reddish, pendulous catkins. The edible cylindrical fruit is 2 to 3 cm in length, and turns deep red.

Within Canada, this eastern North American species is found only in southern Ontario. It has been confirmed in 18 locations in the province, but only eight of these sites contain five or more individuals. The total known population was 123 trees in 1999, approximately 200 in 2001, and 234 in 2002, all within the Carolinian Zone of southern Ontario. The increase in numbers is not due to population increase, but rather new discoveries of plants. Based on historical records, this species appears to be declining in occurrence.

The Red Mulberry is an understory forest tree species found in moist forest habitats. In Ontario, these include slopes and ravines of the Niagara Escarpment, and sand spits and bottom lands near Lake Erie in the Kent and Essex counties region.

The wind-pollinated flowers emerge with the leaves in late spring. Individual trees may have both male and female catkins, or may bear catkins that are all male or all female. Birds are likely the most significant dispersers of seeds from the fruit which matures in mid-July. Seeds can germinate the same summer as they are produced, but some may remain dormant in the soil.

Loss of habitat due to land clearing and altering of drainage patterns is thought to be the main limiting factor for the Red Mulberry. In addition, the species is thought to be negatively impacted by the alien and more aggressive White Mulberry (Morus alba), with which it freely hybridizes. This situation is aggravated by the low rate of recruitment which characterizes Red Mulberries in Ontario. In a study area in Point Pelee National Park, a number of Red Mulberry trees were lost to a twig blight disease, and a high level of gastropod grazing of young seedlings was documented.

Summary of Progress to Date The Red Mulberry recovery team aims to conserve and, if necessary, restore functionality of Red Mulberry populations to achieve long-term stability in the two regions of its occurrence in southern Ontario. The majority of populations of pure Red Mulberry are protected on publicly or privately owned conservation lands. However, Red Mulberry is being overtaken throughout most of its range by the more common invasive exotic, White Mulberry, through competition and hybridization. Experiments have demonstrated that culling of White Mulberry can increase the reproductive success of Red Mulberry and reduce hybridization. However, due to White Mulberry’s fitness advantage over Red Mulberry, it is anticipated that a large amount intervention will be necessary to prevent the extirpation of Red Mulberry. Summary of Research/Monitoring Activities Census surveys were conducted between 1998 and 2000 to identify all remaining populations of Red Mulberry. Habitat surveys also were conducted for all Red Mulberry populations. Census and habitat data are used in recovery planning for Red Mulberry in Ontario. Representative herbarium specimens have also been prepared to document each population. Most Red Mulberry populations in Ontario co-occur with the non-native White Mulberry, and the presence of individuals with intermediate leaf shape indicated to researchers that the two species might be hybridizing. Genetics studies conducted between 1998 and 2004 confirmed hybridization. Furthermore, hybrids had more white than red markers in their genome and the number of white markers increased with the number of White Mulberry in the population. These results provide evidence of genetic dilution of Red Mulberry by White Mulberry. The effectiveness of culling White Mulberry trees was tested at Point Pelee National Park and Fish Point Nature Reserve. Twelve Red Mulberries were selected and White Mulberry was removed from a 25 m radius around six of them. The fruit produced by the Red Mulberries were collected, germinated and grown in a greenhouse, and leaf samples from the resulting seedlings were prepared for molecular analysis. Results from this work showed that the removal of White and hybrid Mulberry in culled plots successfully increased the number of seeds sired by Red Mulberry and decreased the proportion of matings with White and hybrid Mulberry. An experiment was conducted to determine the conditions in which mulberries best perform. Red, White and hybrid Mulberry plants were planted in both sun and shade in two natural environments and one garden site. Survival and height were measured over two years and a resulting fitness measure was calculated. The results showed that both hybrid and White Mulberry significantly out-performed Red Mulberry in both sun and shade at each location. The superior fitness of White Mulberry and hybrids across habitat types suggests that Red Mulberry will continue to be in jeopardy wherever the non-native White Mulberry is present. During inventories, cankers and twig blight have been observed on many Red Mulberry trees. Researchers identified the cause of the disease at several locations in Ontario, including Point Pelee National Park, Fish Point Nature Reserve, Rondeau Provincial Park and Royal Botanical Gardens. The study concluded that no single pathogen was responsible for the disease symptoms because several opportunistic canker-causing pathogens and two opportunistic root disease pathogens were associated with the diseased trees. These opportunistic pathogens are incapable of infecting healthy tissues, but can successfully damage weakened hosts. The results imply that the cause of the blight and dieback is not a virulent disease, but indicate that other stresses are weakening the trees and making them susceptible to infestation. The probable causes of these stresses are drought, low soil fertility and suppressed canopy position. Summary of Recovery Activities The primary recovery activity has been culling of White Mulberry from Point Pelee National Park and Fish Point Nature Reserve, which began in 1993. Some culling has also taken place at Rondeau Provincial Park. As noted above, this is expected to have a positive effect on Red Mulberry recruitment and culling is being considered for other Red Mulberry sites. Red Mulberry is also in the process of regulation under Ontario’s Endangered Species Act. In 2004, landowners with Red Mulberries on their property were contacted to provide them with information on regulation and to address any concerns. Almost all landowners were reached and all expressed support.