In Canada, this species occurs sporadically in Ontario and Quebec. Its Canadian population is extremely small, ranging from 0 to 25 individuals depending on the year. Populations in adjacent parts of the U.S., which are a likely source of birds for Canada, are declining. Habitat loss is ongoing for this species.
COSEWIC History of Status Designation: Designated Threatened in April 1984. Status re-examined and designated Endangered in April 1993. Status re-examined and confirmed in November 2000 and May 2011.
SARA Status: Schedule 1, Endangered
Date of Listing (yyyy-mm-dd): 2003-06-05 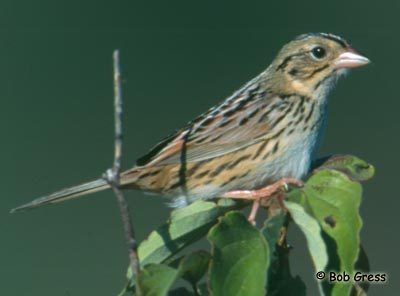 Henslow’s Sparrow is a small grassland bird. Males and females cannot be distinguished by appearance. The top of the head, the hind-neck, and the sides of the neck of all adults are pale olive green. There are two black stripes on the bird’s crown, on either side of a pale stripe. The species’ back is black and the back feathers have white tips. The rump, wings and tail are chestnut, with black in the middle of the feathers, and the breast, sides, and flanks are buff with black streaks. Young Henslow's Sparrows have buff underparts with no streaks.

Henslow’s sparrow breeds only in the northeastern United States and southern Canada, and winters in the southern United States in the Gulf coast states and South Carolina. In Canada, it now occurs in southern Ontario. Historical information indicates that the species probably occurred in natural prairie areas and that forest clearing in the 1800s probably lead to an expanded range for a time. In addition to southern Ontario, the Henslow’s sparrow used to occur in southwestern and eastern Ontario and also in Quebec. There is no early information on species population size and trends. It is very difficult to estimate the population size for this bird, but information suggests that the species has been declining since the 1950s. Henslow’s sparrows were known to breed in southern Quebec up until the late 1960s but are now considered vagrants in the province. In the 1980s, the Canadian population was estimated at no more than 50 pairs. Thorough searches for the bird were carried out in the early 1990s. These data suggest that less than 10 pairs were probably left at that time. Recent surveys have yielded similar results. In 1998, one bird was reported and at least one other was known to occur in the province.The latest population estimate available in 2001 counts 2 to 3 pairs of Henslow's Sparrows, with the total population remaining critically small.

Henslow’s sparrows occupy open fields. The vegetation of these areas includes tall grasses that are interspersed with tall herbaceous plants, or shrubby species. The sparrow avoids areas that have been grazed or burned. It prefers undisturbed areas with dense living grasses and a dense thatch of dead grasses. The species may occupy hayfields, but if the hay is cut early, the nests are destroyed and the resulting losses are severe. Only areas that remain undisturbed for several years appear to be more successfully colonized. The precise amount of remaining suitable habitat in Ontario is unknown.

Male Henslow's Sparrows arrive in the breeding areas ahead of the females in late April and early May. The age at which Henslow's Sparrows first breed is not known. Nests are built on the ground. Clutches contain from 3 to 5 eggs. Several pairs may nest in the same field, forming a small, loose colony. The species prefers to spend time out of sight in the long grass and herbs, and males can most easily be seen when they perch on plant tops to sing. Their song is a weak short insect-like se-lick.

The major limiting factor is loss of habitat, especially habitat used for breeding, and habitat used for wintering in the United States. Suitable Henslow’s sparrow habitat is lost through the conversion of grasslands and pastures to grow crops. It is also lost with the intensive use of land that leaves very little area undisturbed for periods of time. In addition, drainage of wetlands and wet grasslands, successional change to woodland and shrubland where fires are suppressed, and encroaching urbanization, all contribute to the loss of this species’ habitat. The vulnerability of this species is increased due to the fact that small populations of sparrows inhabitat isolated areas.

Summary of Progress to Date The 1994 Henslow’s Sparrow recovery plan identifies the loss of native grasslands as the probable cause of the species’ decline. However, it notes that some sites in Ontario still have apparently suitable habitat, but that birds no longer breed there. Thus, the plan recommends research into other factors (e.g., loss of wintering habitat, mortality between breeding seasons, local population losses owing to small numbers of individuals in isolated locations, or natural population fluctuations) that may also be affecting the species. The long-term objective of the recovery plan is to establish a stable or increasing breeding population of 500 adults distributed in different colonies across Ontario (e.g., 50 colonies with a minimum of 10 birds each). However, the sparrow is at severe risk of disappearing from Canada. A new recovery team is being established in 2005 to develop an updated recovery strategy. Summary of Research/Monitoring Activities The Henslow’s Sparrow population appears to have declined since the late 1990s. Several historic sites were surveyed in 2002. Habitat was found to have changed significantly and, as of 2005, there are no confirmed breeding locations in Ontario. Summary of Recovery Activities In 1998 an adaptive habitat management project was initiated at Ostrander Point in Prince Edward County. Approximately one third of the area identified for treatment was mowed and cleared of brush. In 1999 bird surveys were conducted to determine if the mowing and clearing of brush had a positive impact on Henslow’s Sparrow; several singing males were heard in 1999 and again in 2000, indicating that with careful habitat management this species may again breed here. In 2001 habitat stewardship and outreach activities were also initiated for potential Henslow’s Sparrow habitat on the Bruce Peninsula.