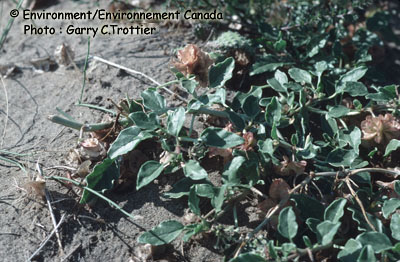 The Small-flowered Sand-verbena is an annual plant that grows to heights of 20 to 50 cm. It branches near the base and spreads along the ground, with only the tips of the stems turned upwards. The paired leaves are 2 to 6 cm long, 1 to 3 cm wide, and have prominent veins. The tiny, greenish-white flowers are quite striking. They are arranged in dense clusters with a ring of modified leaves underneath, and tend to open in the late afternoon. The fruit are pale pinkish-green, about 2 cm long, and have two to three thin, papery wings.

The Small-flowered Sand-verbena is a species of western North America that reaches the northern extent of its range in Western Canada. It occurs at multiple sites in southeastern Alberta in the general area where the Bow, Oldman, and South Saskatchewan rivers come together. In Saskatchewan, it has been found at only one site just east of the Alberta border where the South Saskatchewan River joins the Red Deer River. Population trends for the Small-flowered Sand-verbena are difficult to interpret as abundance is heavily dependent on rainfall. Surveys of all known sites in 2001 revealed only two plants, whereas more than 3000 were counted on similar surveys done in 2002. Two new populations were discovered in Alberta in 2002, and one of the previously known populations is presumed to be extirpated. No plants were found at the site in Saskatchewan in either 2001 or 2002.

In Alberta and Saskatchewan, the Small-flowered Sand-verbena is found in the mixed-grass prairie region. It grows on sand-hill areas in very dry conditions, and usually requires some drifting or unstable sand. The largest populations occur on hard-packed, fine sand on level ground, but it is also found on slopes or the ridge tops of the dunes.

The Small-flowered Sand-verbena is an ephemeral species — when conditions are appropriate, it germinates, flowers, sets seed, and dies in a relatively short time. The extremely hardy seeds lay dormant awaiting suitable conditions for germination the following or subsequent spring, when the cycle is repeated. The Small-flowered Sand-verbena can only germinate when moisture is present for a sufficient length of time to break down the dispersal structure that covers its seeds. This prevents loss of seeds that might germinate in response to a spring storm that is followed by a hot dry period. Flowering occurs from May to July over the species’ range, but most plants in Canada flower in mid-June and produce fruit in mid-July. Since the Small-flowered Sand-verbena is an annual, and the seeds are winged, the plant is unlikely to be found in exactly the same spot each year. Natural dispersal will usually carry seeds downwind and downstream from the original site.

Dune stabilization has resulted in a significant loss of habitat for the Small-flowered Sand-verbena throughout its range in Canada. The absence of fire and the decreased grazing of prairie areas have resulted in less drifting or unstable sand, allowing the establishment of other species, including alien invasive weeds, on the dunes. The cultivation of areas surrounding existing populations of Small-flowered Sand-verbena also decreases the opportunities for it to spread naturally. One of the sites with the largest number of plants in 2002 is currently threatened by sand removal and leveling of the main dune area.