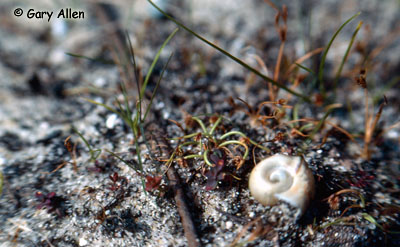 Lipocarpha micrantha is a small annual sedge. Mature plants have stems and leaves up to 10cm long and 0.5mm wide. The flowers are inconspicuous in heads 2-6mm long. (Updated 2017/05/25)

Lipocarpha micrantha is found from Brazil north to southern Canada. Its range in Canada is extremely fragmented, with confirmed populations in the Okanagan Valley in British Columbia and on Sable Island, Lake of the Woods, in Northwestern Ontario. An additional population was discovered in 2000 on Pound Net Bay, Rainy Lake, in northwestern Ontario and likely still persists there. Several populations in southern British Columbia, southern Ontario and southern Quebec have been extirpated. (Updated 2017/05/25)

This species is confined to moist sandy beaches with some protection from waves. It does not tolerate competition or organic sediment. This habitat is highly prized for development. As a consequence much of it has been destroyed. (Updated 2017/05/25)

Lipocarpha micrantha is an annual species. As such it may remain dormant and undetected for years if water levels are unfavourably high. It is very sensitive to habitat conditions, and relatively minor alterations may render an area unliveable for this species. (Updated 2017/05/25)

Habitat destruction is directly linked with the loss of three populations, and remains a threat for one of the remaining populations. Artificial manipulation of water levels also threatens the viability of existing populations. Natural population fluctuations make this species especially susceptible to habitat alteration. (Updated 2017/05/25)

Summary of Progress to Date A recovery team has been established for Small-flowered Lipocarpha. Additionally, the British Columbia population is addressed in the South Okanagan-Similkameen Conservation Program. Summary of Research/Monitoring Activities In 2003, surveys for Small-flowered Lipocarpha were conducted at sites in Lake of the Woods, Ontario where the flower was historically known to occur. Further surveys are planned to determine population levels and habitat requirements for Small-flowered Lipocarpha in Ontario. Summary of Recovery Activities Five of twelve populations in northwestern Ontario are secured within provincial parks or conservation reserves. The remaining populations are currently secure due to stewardship by private landowners or management agencies. Water management of one reservoir system in Ontario was changed in 2000 to help restore a more natural water level regime, addressing one of the significant threats to this plant.