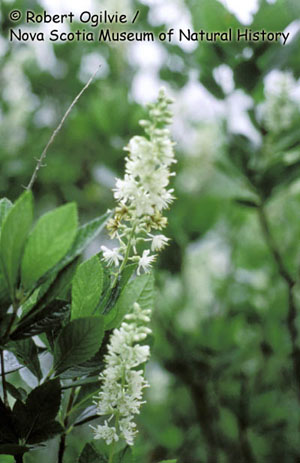 Sweet Pepperbush is a deciduous, woody, wetland shrub 1 to 3 m tall that can grow in a clumped form or with single stems arising from a spreading rhizome (underground stem). The dense, narrowly elongate flower clusters are 4 to 12 cm long and composed of small, white, 5-petalled flowers that are strongly fragrant. Fertilized flowers mature into dry, round capsules with many small seeds, though seed production has been reported as sometimes absent or rare in Canada. Sweet Pepperbush is one of many nationally rare, disjunct species of the Atlantic Coastal Plain in southern Nova Scotia. Outreach programs have resulted in fairly wide understanding and appreciation of this rare flora. Sweet Pepperbush is particularly appreciated by some landowners because of its showy flowers and strong, pleasant fragrance, characteristics that have made it a widely used ornamental species with many developed cultivars. Canadian populations are isolated from others by 200+ km and are the northernmost worldwide, suggesting potential significance to the species’ range-wide genetic diversity. [Updated by COSEWIC - Nov. 2014]

Sweet Pepperbush is native to the eastern United States and southern Nova Scotia, from Maine to western Texas, primarily along the Atlantic Coastal Plain (excluding southern Florida) and into the Piedmont plateau region of the eastern USA within about 150 km of the coast. In Canada, Sweet Pepperbush is restricted to three subpopulations on six lakes in southern Nova Scotia within a 70 km by 60 km area. It has become marginally established after escaping from cultivation in Belgium, The Netherlands, and England. Canada supports less than 1% of the global population. The Canadian population is not more than 45,471 individuals based on stem numbers estimated from comprehensive 2011 and 2012 surveys. Stems counts overestimate number of mature individuals because some tightly clumped stems are best classed as single individuals and smaller stems may be unable to reproduce sexually or vegetatively. The degree of this overestimation is unknown. Stem estimates by subpopulation are: 1) Belliveau Lake – 16,070; 2) Pretty Mary, Mudflat, and Mill lakes – 27,700; 3) Louis Lake and Canoe Lake – 1,700 individuals, with only a single individual at Canoe Lake. [Updated by COSEWIC - Nov. 2014]

In Nova Scotia, Sweet Pepperbush is a species of acidic upper lakeshores and lakeshore forest margins, also occurring locally along shrubby and semi-forested stream margins and under Red Maple-dominated swamp forest canopy within about 20 m of shorelines. It has not been observed to flower when under dense forest canopy in Nova Scotia. Similar habitats are occupied throughout its range, but prevalence in shaded and upland areas is more frequent in the United States where occurrence in upper salt marsh margins is also noted. [Updated by COSEWIC - Nov. 2014]

Sweet Pepperbush flowers in Nova Scotia from late July to early September. Pollination is primarily or exclusively by insects, especially bees. Sweet Pepperbush exhibits strong, but not complete self-incompatibility. Coupled with theorized low genetic variability, this could cause the limited seed production noted at Belliveau Lake and suspected elsewhere in Nova Scotia, where seedling establishment is rare. The tiny seeds remain in the capsules into late fall or winter and could be moved by water, wind, and vertebrates (via clinging mud). Seeds can germinate immediately after dispersal but germination is enhanced by cold stratification. Seed longevity is unknown. Average time to first flowering from seed in the field is probably more than ten years. Individual stems can live at least 28 years. Most reproduction is by spreading rhizomes which can produce new shoots up to 2.4 m from the parent plant. These allow colonization of wetter areas where seedling establishment is difficult and form a "sprout bank" that can respond rapidly to canopy openings. Time to flowering and to vegetative reproduction for new vegetative shoots is likely at least several years. Generation time could be at least 10 years. Clumps of stems (which continually resprout from the base) and complexes of connected genetic individuals are presumably much longer-lived. [Updated by COSEWIC - Nov. 2014]

Competition from the invasive exotic shrub Glossy Buckthorn is already occurring to a very limited extent and is likely to become more severe at the Pretty Mary-Mudflat-Mill lakes subpopulation, where thousands of mature Glossy Buckthorn plants are present on abandoned farmland adjacent to the lakes. Glossy Buckthorn is perhaps 10 km away from Belliveau Lake and 40 km away from Louis Lake and is likely to reach those sites within one to several decades. The timing and magnitude of its impact is uncertain. Eutrophication from leaching sewage ponds on an abandoned hog farm at Belliveau Lake is changing habitat on one corner of the lake where Sweet Pepperbush occurs. Impacts on the species are unclear, but could become significant, especially if coupled with Glossy Buckthorn invasion. Shoreline development has slowly but steadily increased on Belliveau, Pretty Mary, and Mudflat lakes over the past 30 years and will likely continue. It is also a threat on currently undeveloped Mill Lake. Landowners frequently cut and remove some (but generally not all) Sweet Pepperbush for shore access and to enhance views, with overall losses to shoreline development up to the present roughly estimated at less than 4.6%. A long-standing but poorly maintained dam on Mill Lake may be limiting occurrence there and if it was breached it might make conditions less suitable for existing Sweet Pepperbush and allow rapid influx of Glossy Buckthorn from large nearby populations. Limited genetic variability resulting in limited seed production is speculated to be a major limiting factor in Nova Scotia, which would explain the absence of Sweet Pepperbush over vast areas of suitable habitat. [Updated by COSEWIC - Nov. 2014]