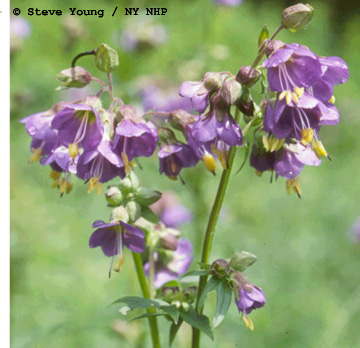 Van Brunt's Jacob's-ladder is an herbaceous perennial with loose branching clusters of blue-violet flowers.  It emerges from a branched rhizome (horizontal underground stem) to stand 40 to 140 centimeters tall.  The stem is smooth, robust, and upright, branching only at the flower heads.  The leaves consist of 11 to 21 smooth leaflets that alternate on the stem.  They are oval to oblong, 5 to 60 millimeters long, and 2 to 25 millimeters wide.  Leaf size decreases as you go up the plant; basal leaves average 50 centimeters long, while those at the base of the flower heads are only about 2 centimeters long.  The slender flower heads are tubular at the base and bear two to eight odourless flowers measuring 15 to 25 millimeters in diameter.  The flowers have a yellowish-green base and blue-violet petals.

Van Brunt's Jacob's-ladder grows naturally in the central Appalachians of eastern North America. It occurs in a relatively small area from eastern West Virginia to southern New Brunswick and southeastern Quebec, where it reaches its northern limit. It is known from three sites in New Brunswick, one historic site was rediscovered in 2009, one new site was found in 2005, and one site that may have been introduced. All other known Canadian populations (past and present) occur in the Eastern Townships and the Bois Francs region of southeastern Quebec. In 2001, an estimated 20 000 plants were growing in 12 populations within eight general areas. Two new populations were discovered in previously unexplored sites, and two previously known populations have disappeared.

Van Brunt's Jacob's-ladder grows in rich soil, in open or semi-open habitat that floods in the spring but does not have standing water all summer.  This type of habitat is found in riparian meadows, swamps, or non-wooded depressions that are often at the bottom of slopes and near streams.  Grassy clearings that are too wet for large trees are also suitable.  The average temperature at sites in Canada is about 4 degrees Celsius, and the average annual precipitation is high at 1016 millimeters.  Although the plant is found in mountainous regions, it prefers flat terrain with a slight slope.  The Quebec populations occur at the limit of Maple-basswood and Maple-yellow Birch bioclimatic zones.  Surrounding vegetation usually consists of Spruce, Fir, or Cedar.  Most populations are associated with a variety of common and invasive grasses.  Where competition is very strong, Van Brunt's Jacob’s-ladder usually has problems spreading.

In Quebec, Van Brunt's Jacob’s-ladder flowers from mid-June to the end of July.   The flowers are pollinated by insects, mainly bees, and the fruits start to ripen by mid-August.  Many stalks of this plant stay upright well into the winter, and seeds are dispersed by the wind across the snow.  These seeds appear to require a period of cold dry conditions before they can germinate.  Van Brunt's Jacob's-ladder also reproduces vegetatively from rhizomes, which can form clones or clusters of a few individuals up to hundreds of plants.  The importance of seed dispersal relative to vegetative spread varies from site to site.  Transplantation is possible, and botanists at the Montreal Botanical Garden are investigating germination and cultivation of Van Brunt’s Jacob’s-ladder, as well as other plants that are endangered in Quebec.

Van Brunt's Jacob's-ladder has specific moisture requirements; it cannot tolerate changes that extend spring flooding, or cause the habitat to dry out too much.  The greatest threats to Van Brunt's Jacob's-ladder are road and residential construction, agriculture (including mowing, ploughing, and cultivation of Christmas trees), logging, and all-terrain vehicle traffic.

Van Brunt's Jacob’s-ladder is designated threatened under Quebec's Act: Respecting Threatened or Vulnerable Species. It is illegal to harvest, destroy, or possess this plant outside its natural environment, and fines can be imposed.  All populations of this plant in Canada are on privately owned land.  In 2001, the Quebec Society for Wetland Conservation, a private organisation, purchased an important site for Van Brunt's Jacob's-ladder, and negotiations are under way to acquire a second property.

Summary of Progress to Date To date, 12 occurrences have been inventoried in Quebec, one of which is historical (last encounter dating back over 25 years) and one of which has disappeared. Therefore, we know of 10 actual occurrences, nearly all of poor quality and mostly showing signs of decline associated with changes in habitat. Conservation agreements made with landowners allow habitat restoration activities on private lands. To date, four Van Brunt’s Jacob’s-ladder populations, two of them among the largest in Canada, and over 22 hectares of habitat have been protected. Summary of Research and Monitoring Activities Jacob’s-ladder populations have been monitored since 1994. A demographic study initiated in 2005 should lead to a more accurate estimate for different population surveys, in addition to providing a standardized long-term monitoring protocol. Efforts are being made to confirm identifications where other closely related species may have been introduced. A conservation plan specific to the Province of Quebec has been developed and its implementation will begin in 2006. Summary of Restoration Activities Landowners where the habitat is found are informed about species protection at individual meetings. These meetings also offer the possibility of integrating the owners’ community knowledge into the project and increasing their awareness to the necessary conservation measures. URLs Canadian biodiversity: Endangered species – Van Brunt’s Jacob’s-ladder:http://www.canadianbiodiversity.mcgill.ca/english/species/endangered/endangeredpages/ast_lau.htm Plantes menacées ou vulnérables au Québechttp://www.mddep.gouv.qc.ca/biodiversite/especes/polemoine/polemoine.htm (available in French only)