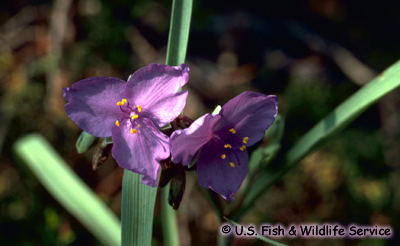 The Western Spiderwort is a perennial flowering plant of sand dunes. It has a straight slender stem, and grows to heights of 5 to 60 cm. The leaves are grass-like, 10 to 30 cm long, have prominent purplish veins, and are folded lengthways. The flowers have three petals that are 10 to 15 cm long and slightly pointed at the tips. The petals are typically dark blue, but occasionally can be white or pink. Flowers occur in clusters, but only a single flower opens each day, and lasts just a few hours. One to six grey seeds, 2 to 4 mm long, are contained within an oblong papery capsule. The species' common English name comes from the gel-like substance secreted by the plant’s broken stem. It can be stretched into long strands that form cobweb-like threads when they harden.

The Western Spiderwort is found in the central United States, from Texas, New Mexico, and Arizona in the south, to Montana and the Dakotas in the north. In Canada, the Western Spiderwort is at the northern limit of its range. It occurs at only four sites in the southern part of the Prairies: Pakowki Lake Sand Hills in southeastern Alberta, Douglas Provincial Park in Saskatchewan, and Lauder and Routledge sand hills in southwestern Manitoba. The two sites in Manitoba are connected to the main range of the species in the United States. Surveys from 1996 to 2002 indicate that the Western Spiderwort population in Canada has fluctuated from a low of about 15 000 to a high of about 50 000 plants, with the majority found at two Manitoba sites. In 2001, a year with low precipitation, the Alberta site had only 7 plants; in 2002, under more favourable conditions, 7 450 plants were counted.

The Western Spiderwort grows on partly stabilized sand dune ridges, usually on the crests and steeper south-facing slopes. It is typically associated with areas of active, drifting sand, where vegetation is relatively sparse. In Manitoba, the Western Spiderwort has also been known to grow in meadows and in shaded habitat — especially in grazed areas. Above average moisture in the summer increases both population size and the length of the flowering period. Above-ground shoots require a protective layer of snow to survive the winter.

The flowers of the Western Spiderwort open in late June or early July, and are pollinated by insects, usually sweat bees. The seedpods break open about three weeks after flowering and release between one and six seeds. The seeds tend to fall quite close to the plant, so the Western Spiderwort usually grows in clumps. It can also spread vegetatively by developing roots off the stem. After flowering, the above-ground parts of the plant dry up and new shoots grow from the base of the stem. Much of this new growth survives the winter and resumes growing the following spring. Western Spiderwort is unlikely to be mistaken for many other plants, as there are no other members of this plant family (Commelinaceae) native to Western Canada. Some close relatives are grown as ornamentals, but rarely escape from gardens.

Loss of habitat is the main factor in the decline in Western Spiderwort populations. The conversion of native prairie into agricultural lands has greatly decreased the amount of suitable habitat for the species. Petroleum exploration and extraction in Manitoba is also threatening to wipe out the largest population in Canada. Leafy Spurge Euphorbia esula, an exotic weed, spreads very quickly and forms dense stands that exclude other plants. Excessive vegetation causes shading and stabilizes the slopes of the dunes, resulting in a habitat that is unsuitable for Western Spiderwort. High levels of grazing by cattle can seriously threaten populations of Western Spiderwort, but light to moderate grazing prevents vegetation from encroaching and helps to maintain the active dune habitat.

The Western Spiderwort is listed as threatened under the Manitoba Endangered Species Act. It is illegal to kill, harm, possess, interfere with, or damage the habitat of listed species in Manitoba. It is possible to protect plants under the Alberta Wildlife Act, however, no status designations for plants have yet been assigned under this Act. In Saskatchewan, the Western Spiderwort is designated as endangered under the provincial Wildlife Act and is protected from being disturbed, collected, harvested, captured, killed, or exported.

Summary of Progress to Date The primary focus of the recovery team for plants at risk in Prairie Canada is inventorying, monitoring, and collecting habitat and demographic information on the species to better understand its habitat associations, distribution, and threats in Canada. Summary of Research/Monitoring Activities Existing populations are surveyed during the flowering season. Similar habitat and areas surrounding Western Spiderwort populations also are surveyed to identify any additional populations. In 2002 and 2004, seeds were collected from populations in MB and AB. Investigation into seed longevity, seed germination, and propagation will be conducted. During the summer of 2005, researchers for PFRA-AAFC examined the impact of grazing by sheep on Western Spiderwort as well as the impact and possible control of the invasive plant leafy spurge. Genetic work is also being done on the intra and inter-population genetic diversity of this species in Canada. Summary of Recovery Activities Voluntary stewardship agreements have been secured with rural landowners to conserve habitat for this rare plant species. The landowners have agreed not to cultivate land or unduly disturb the rare plant species residing there. Landowner awareness is being raised through Nature Saskatchewan’s Rare Plant Rescue Program, including their Stewards of Saskatchewan newsletter that was launched in 2002. The newsletter includes information on stewardship, species at risk, and biodiversity. Additional education and awareness activities include displays at trade shows, regional fairs, and other events. Bio-control of leafy spurge is taking place to enhance Western Spiderwort habitat at CFB-Shilo. An Alberta Western Spiderwort Recovery Plan was recently approved. This will be the second year of implementation of the plan in that province. URLs Nature Saskatchewan:http://www.naturesask.ca Saskatchewan Environment: Western Spiderwort:http://www.se.gov.sk.ca/ecosystem/speciesatrisk/westernspiderwort.htm Manitoba’s Species at Risk:http://www.gov.mb.ca/conservation/wildlife/managing/pdf/western_spiderwort.pdf Alberta Species at Riskhttp://www.srd.gov.ab.ca/fw/speciesatrisk/recovery_teams.htmlhttp://www.srd.gov.ab.ca/fw/speciesatrisk/ Environment Canada Species at Riskwww.speciesatrisk.gc.cawww.sarapublicregistry.gc.ca