Scientific Name: Viola praemorsa ssp. praemorsa
Other/Previous Names: Yellow Montane Violet
Taxonomy Group: Vascular Plants
COSEWIC Range: British Columbia
COSEWIC Assessment Date and Status Change: November 2007
COSEWIC Status: Endangered
COSEWIC Status Criteria: B1ab(iii)+2ab(iii)
COSEWIC Reason for Designation: The subspecies is only known in Canada from southeastern Vancouver Island and the adjacent southern Gulf Islands where it occurs as 14 mainly small, localized populations that are highly fragmented. This short-lived perennial is restricted to Garry oak woodlands and maritime meadows where habitat is continuing to decline in quality due to such factors as the spread of exotic invasive grasses as well as the spread of trees and shrubs as a result of fire suppression.
COSEWIC History of Status Designation: Designated Threatened in April 1995. Status re-examined and confirmed in May 2000. Status re-examined and designated Endangered in November 2007.
SARA Status: Schedule 1, Endangered
Date of Listing (yyyy-mm-dd): 2003-06-05 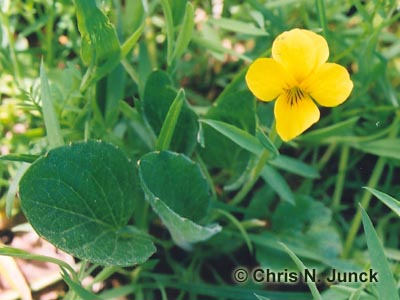 The praemorsa subspecies of the Yellow Montane Violet is a small perennial herb measuring 5 to 20 cm tall. The short stem may be leafless or it may have a few reduced leaves. The dark green basal leaves are densely or sparsely hairy. They measure 2 to 10 cm long and 1 to 3.5 cm wide and are borne on leaf stalks 3 to 15 cm long. The leaves are oval with slightly toothed margins. The praemorsa subspecies of the Yellow Montane Violet produces two types of flowers: open flowers with five petals and closed flowers with no petals. The flowers with petals are yellow. The lowest petal is pencilled with brownish-purple markings and is spurred at the base. The lateral petals are bearded and the two upper petals, which are slightly smaller than the lower petals, tend to be brownish on the back. The flowers without petals are borne on short stalks near the base of the shoot and often escape notice. Both types of flowers mature into capsules, dry fruit 6 to 11 mm long containing several dark brown seeds.

The range of the Yellow Montane Violet extends from Vancouver Island to California, chiefly west of the Cascade Mountains. In British Columbia, the praemorsa subspecies of the Yellow Montane Violet is found only along the southeastern coast of Vancouver Island and on adjacent islands in the Strait of Georgia. There are 14 extant populations in Canada and, based on recent data, there were between 32 000 and 49 000 flowering plants in British Columbia in 2007, with about 80 to 90% of the Canadian population of the praemorsa subspecies of the Yelllow Montane Violet concentrated in two populations. The number of populations has been in slow decline; five have disappeared, but none have been lost since the late 1990s.

Few data are available on the biology of the praemorsa subspecies of the Yellow Montane Violet. In Canada, the leaves emerge early in the spring. Shoot dormancy begins to break in March when the soil begins to warm up with the spring weather. Plants are fully leafed out by late April or early May. The flowers that are open (for cross-pollination) bloom in late April and May, and the closed flowers (which are self-pollinated) bloom somewhat later. The praemorsa subspecies of the Yellow Montane Violet is probably pollinated by the same species that pollinate closely related violets: flies, butterflies, solitary (non-colonial) bees and thrips. The foliage begins to wither by mid- to late June and the shoots die back by mid- to late July as the summer drought deepens. Fruit dispersal occurs as the desiccating capsules rupture abruptly, sending the seeds out as far as 1 m. Fruit dispersal occurs in June and July, and all seeds are released by late July. The seeds are hard and shiny and bear a fatty outgrowth that attracts ants, which carry the seeds slightly further from the parent plant. Seed production is vital for this violet, as this is its only means of reproduction (the praemorsa subspecies of the Yellow Montane Violet is incapable of clonal growth or asexual reproduction).

The Yellow Montane Violet praemorsa subspecies is protected under the federal Species at Risk Act (SARA). More information about SARA, including how it protects individual species, is available in the Species at Risk Act: A Guide.

In British Columbia, the species is not protected under any provincial legislation. Of the fourteen extant populations in Canada, seven are in municipal and/or regional parks, where they are protected from development but face major threats from park users. Three populations are in provincial parks or ecological reserves, where they receive some protection and recreational activities tend to be less intensive. Two populations are on land owned by conservation organizations, which provide a high degree of protection, including measures to control invasive species and counteract the impacts of fire exclusion. One of the Saltspring populations extends onto federal lands, which are protected under the Species at Risk Act (SARA).