This large member of the rail family is associated with marshes of various description – especially those that are large and relatively complex. Its breeding range extends from southern Ontario through much of the eastern U.S. In Canada, precise information on the population size, population trend, and breeding distribution of this rare and secretive species is somewhat limited. Nevertheless, the best available evidence indicates that the Canadian population remains small (fewer than 100 individuals). The major threat is degradation of high-quality marsh habitats across its range.
COSEWIC History of Status Designation: Designated Special Concern in April 1985. Status re-examined and designated Endangered in April 1994. Status re-examined and confirmed in November 2000 and in May 2011.
SARA Status: Schedule 1, Endangered
Date of Listing (yyyy-mm-dd): 2003-06-05 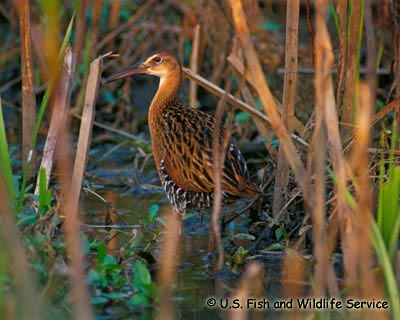 The King Rail is a cinnamon-coloured marsh bird with black-and-white barred sides. It has a yellow bill that is long and slightly curved. Its back is streaked with black. Immature birds are similar in appearance to adults but are much darker. The King Rail is the largest species of North American rail - twice the bulk of the more common Virginia rail. It’s thin, long-legged form allows it to squeeze through dense vegetation and creep about wetlands with great agility. It has a variety of calls including an evenly spaced series of up to 10 kik-kik-kiks.

The King Rail potentially breeds throughout most of the eastern United States (except in the higher reaches of the Allegheny Mountains). In the United States, it is irregular and scattered everywhere, except in the lower Mississippi Valley and near the Gulf and Atlantic coasts. The species also breeds in southern Canada, as well as along the Caribbean coast of Mexico (not into the Yucatan Peninsula) and in Cuba. The species winters in the Gulf states and along the Atlantic coast of its summer range. In Canada, the species breeds only in the extreme southern part of Ontario. It is thought that the King Rail was quite common in some southern Ontario marshes, although there is no early information on population numbers and the area occupied. Data from the mid 1980s and early 1990s indicates that there were between 20 and 52 pairs in Ontario. Information obtained in 1997 and 1998 confirms an optimistic estimate of 50 pairs. In 1999, an extensive survey revealed fewer than 30 calling birds. Accurate population estimates are difficult to obtain because of the King Rail’s secretive nature, but it is certain that there has been no improvement in the Canadian population of the species in recent years.

King Rails are found in a variety of freshwater marshes and marsh-shrub swamp habitats. The species occurs in areas where wild rice grows but also in sedge and cattail marshes. Most importantly, the species requires large marshes with open shallow water that merges with shrubby areas. In fact, birds only return in successive years to large marshes that are not overgrown with cattails. Originally, the best habitat for King Rails was in southwestern Ontario, but most of these wetlands have since been eliminated. Only 10% of the original pre-European settlement marshes remain in the one area of Ontario where the largest component of the species occurs. The quality of the remaining habitat is also deteriorating.

The King Rail arrives in its breeding range from late April to mid-May. It probably begins breeding in its first or second year. Males establish a territory before pairing, and will aggressively fend off other males. Once settled in a territory, males begin calling. They use courtship feeding to attract and maintain females. They also provide food for their mates throughout the egg-laying and incubation periods. The nests are deep bowls of grass constructed just above the water in bushes or clumps of marsh vegetation. In Ontario, females lay a single clutch per year, of 6 to 13 buff-coloured eggs. Both sexes share in incubation and rearing responsibilities. The King Rail has also been known to mate successfully with the slightly smaller clapper rail, which is considered by some to be a salt-water race of the King Rail. The diet of the King Rail consists mainly of crayfish and crabs but includes fish, insects and some plant seeds.

The main limiting factor is habitat loss. While the loss may have slowed over the last decade, the habitat may still be deteriorating. Current losses stem from both pollution and increased cattail abundance related to artificial maintenance of water levels. A major limiting factor for the species may be the annual burning of a large portion of the marshland in which the largest Canadian population of king rails occurs. The full extent of this factor has not yet been evaluated.