Scientific Name: Frasera caroliniensis
Taxonomy Group: Vascular Plants
COSEWIC Range: Ontario
COSEWIC Assessment Date and Status Change: April 2006
COSEWIC Status: Endangered
COSEWIC Status Criteria: B1ab(ii,iii,iv,v)+2ab(ii,iii,iv,v); C2a(i)
COSEWIC Reason for Designation: A long-lived perennial with 11 to 12 extant Canadian populations. These are fragmented and restricted geographically to a highly agricultural and urbanized region that is subject to continuing habitat loss and degradation. Populations consist primarily of vegetative rosettes with only a few flowering plants produced in a given year. The spread of invasive plants within its habitat is a major threat to the persistence of the species. Further losses of populations due to site development are anticipated.
COSEWIC History of Status Designation: Designated Special Concern in April 1993. Status re-examined and designated Endangered in April 2006.
SARA Status: Schedule 1, Endangered
Date of Listing (yyyy-mm-dd): 2007-12-13 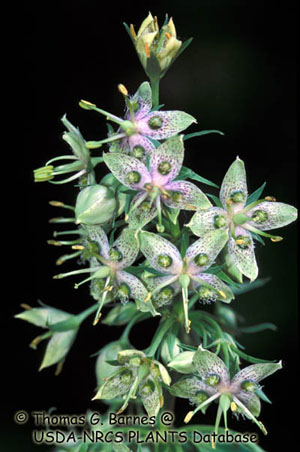 American Columbo is a robust perennial herb with leaves up to 40 cm long. The plant spends most of its life as a rosette of leaves. When stems are produced, they have sets of leaves that become progressively smaller toward the top of the plant. The flowering stem is 2 to 3 m tall. The large flowering head, which grows from the axils of the upper leaves, is shaped like a pyramid. The greenish-yellow petals, which have numerous dark spots, are united at the base and form a saucer-shaped flower 10 to 20 mm long. Populations tend to flower synchronously, with individuals producing a single flowering stem after spending 7 to 15 years or more as a rosette. The fruit is a capsule 1.5 to 2 cm long. Each capsule contains 4 to 14 dark brown, crescent-shaped winged seeds. The plants die after their first and only flowering season.

American Columbo is widely distributed in eastern North America, primarily west of the Appalachian Mountains. Its range extends from southern Ontario to northern Alabama and adjacent states. In Canada, American Columbo is restricted to extreme southern Ontario, where 22 populations have been documented. Nine of these populations have not been seen since 1956.   Of the 22 known populations in Canada, 12 are extant; the status of a 13th population is uncertain. Of the extant populations, 10 are large enough to be considered secure in the short term. Of these 10 populations, 2 may be increasing and 4 appear to be stable. Changes in population size cannot be determined for the remaining extant populations because the data that are available are limited. The historical loss of 9 populations represents a decrease of about 41% since 1956. More recent trends are difficult to determine because of the lack of previous population estimates.   The total number of plants in the Canadian populations in 2005 was estimated to be about 4200, with all but a few being rosettes.

Little is known about the biology of this perennial. However, it is known that the plants spend most of their lives as vegetative leafy rosettes and flower only once. The species grows for a number of years before flowering and subsequently dying. Germination and development of the rosette begin in early spring. Flowers open in May, and are sometimes observed until July. Within the same population, individuals flower at the same time. They are fertilized by pollinating insects, including the honeybee and several species of bumblebee. Fruit production continues until October or November. The seeds, which are probably dispersed by gravity, remain in a dormant state until they absorb water and begin their development at about 5°C. As a consequence, seeds that drop in the fall or early winter absorb moisture from the soil, undergo the necessary development, and germinate the following spring. American Columbo lives for many years, and the long lifespan of this species may allow it to persist temporarily in degraded habitats or in sites that are not its preferred habitat.

The Canadian populations of American Columbo are fragmented and are restricted to a highly agricultural and urbanized region that is subject to continuing habitat loss and degradation; however, encroachment by invasive exotic species is currently the primary threat identified for American Columbo. Habitat disturbance in the form of trails, dumping and logging are also a concern.   In the medium term, planned development will cause further losses in three of the extant populations.