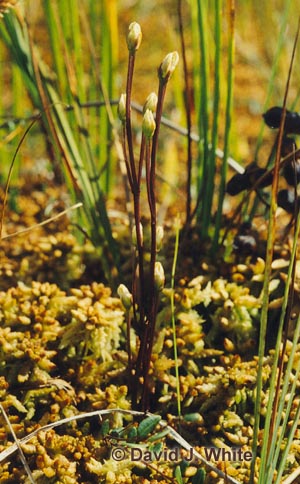 Branched bartonia (Bartonia paniculata ssp. paniculata) is an annual herb 1 to 4 dm tall with a green or purple angled and occasionally twining stem. Due to its common habit of growing deeply nestled in sphagnum moss, it generally appears much shorter. The leaves are reduced to minute scales arranged in an essential­ly alter­nate fashion. The inflorescence is usually a panicle of few to numerous, small, white, 4-lobed flowers on divergent or curved ascending branches. The capsule tapers to a blunt tip and averages 4.2 mm long. The seeds average 0.19 mm long x 0.12 mm wide with 1000 to 1500 per capsule. In view of the plant's greatly reduced leaves and thus its limited photosynthetic capacity, branched bartonia may be heterotrophic, i.e., dependent on soil fungi directly or indirectly for much of its organic nutrient requirements. The related subspecies iodandra occurs in Atlantic Canada but is not, overall, of conservation concern in the region. (Updated 2017/05/23)

The habi­tat is open graminoid (grass-like vegetation) or low shrub sphagnum bog or fen with scattered Larch and Black Spruce. The substrate is peat. The site temperature may be lower than normal due to the saturated nature of the peat and the proximity of Georgian Bay. (Updated 2017/05/23)

Branched bartonia is an annual, possibly heterotrophic, species with reproduction only by seed. It is not known how large the seed bank might be or what conditions are necessary for germina­tion. (Updated 2017/05/23)

The open sphagnum bog or fen habitat for branched bartonia is wide­spread in southcentral Ontario, and there are potential areas that could have populations of the species. When apparently suitable habitat within the known Ontario range is investigated, however, branched bartonia is rarely found. Members of the Atlantic coastal plain flora, to which branched bartonia apparently belongs, are generally restricted to a rather small area of southcentral Ontario. No imminent threats are known; however, peripheral areas of two sites are being taken over by the invasive shrub black buckthorn (Rhamnus frangula). Continued expansion by this shrub could threaten branched bartonia at these sites. Another population, which could not be re-confirmed in 2002, and may have disappeared, is located adjacent to a railway embankment. If this embankment were to be widened the site could be eliminated. (Updated 2017/05/23)

Summary of Progress to Date In 2003, a total of 213 plants were found distributed throughout seven different locations in southern Ontario. There is uncertainty in the total number of plants present because detailed searches have not been conducted at most known sites and due to the fact that the plant is very easily overlooked. In 2005, 530 flowering/fruiting stems were found, which is a 67% increase over the results of the 2002 survey, but not all sites were surveyed in 2002. Summary of Research/Monitoring Activities In 2005, Ontario Parks, Central Zone and the Parry Sound MNR District hired a consultant to inventory all Branched Bartonia populations in Ontario. All 7 known sites were surveyed and plants were found at all of them. There is now complete information on the current status of all known populations. URLs COSEWIC Assessment and Update Status Report on the Branched Bartonia:http://www.sararegistry.gc.ca/virtual_sara/files/cosewic/sr_branched_bartonia_e.pdf Ontario’s Biodiversity: Species at Risk:http://www.rom.on.ca/ontario/risk.php?doc_type=fact&lang=&id=29 Canada’s Species at Risk:http://www.canadianbiodiversity.mcgill.ca/english/species/endangered/endangeredpages/bar_pan.htm