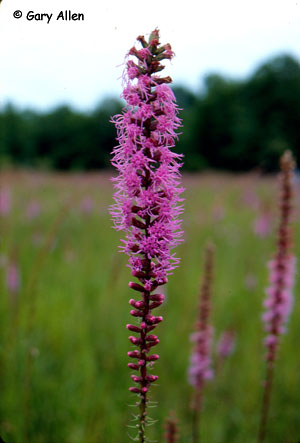 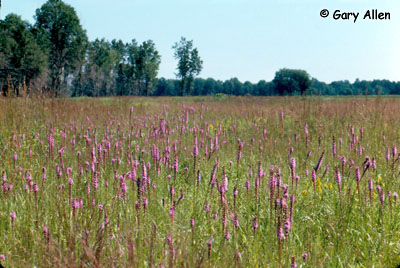 Dense Blazing Star (Liatris spicata) is a perennial herb of the aster family. It has numerous, narrow, grass–like leaves becoming smaller up the stem. The flowering stem is a robust and striking spike of densely packed, purple, compound flowering heads. The inflorescence is commonly 40–70 cm, but can reach over 1 m long, with the plant up to 2 m tall. (Updated 2017/06/05)

Dense Blazing Star is widespread over much of the eastern United States. In Canada, it is restricted to southwestern Ontario. Over 90% of all native Dense Blazing Star plants in Canada grow at Walpole Island First Nation (WIFN), with another large population in Windsor. There are ten extant populations in Ontario. The actual area of habitat occupied is probably only about 2.5 km². (Updated 2017/06/05)

Dense Blazing Star is a plant of open tallgrass prairies. It can grow in a range of moisture regimes from dry to very moist. (Updated 2017/06/05)

Dense Blazing Star is an outcrossing, insect–pollinated perennial that reproduces by seed. The overwintering organ is a globular corm. Based on horticultural information, plants live for about 3–5 years. (Updated 2017/06/05)

The major threat is loss of habitat through land use change, mainly to development, but also to agriculture. Encroachment by woody species is causing habitat decline in all populations and has extirpated some. Lack of frequent fires is the main reason for the growth of woody species. Management practices (mowing, site alteration, vegetation control) are also a threat. Trampling is a concern at some sites. Invasive species, particularly the non–native form of Common Reed, have degraded portions of the species habitat. Erosion from the wake of passing ships has caused local loss of plants at WIFN. Herbicide use may have caused one extirpation. The construction of a proposed expressway and bridge close to Ojibway Prairie could result in the loss of a large number of individuals. Cross–contamination from non–native hybrids and cultivated varieties is a potential threat, but one that has not been demonstrated yet. (Updated 2017/06/05)