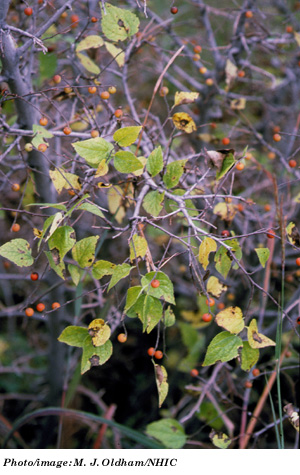 Dwarf Hackberry is a small shrub of the elm family that typically grows 1 to 4 m in height, but can reach up to 10 m. It is multi-branched, with stiff twigs and smooth grey bark that becomes ridged and knotted as the plant ages. Its leaves are slightly to entirely toothed with three distinct veins. The edible fruit of the Dwarf Hackberry is orange-brown and globular with a sweet outer layer, and contains a single seed. The fruit often remains on the shrub throughout the winter.

Dwarf Hackberry is restricted to North America and ranges from the lower Mississippi Valley to the Atlantic piedmont and coastal plain. In the northern extent of its range, the species distribution becomes fragmented, with about 20 disjunct (separate) populations in the lower Great Lakes region. Six of these isolated populations occur in southern Ontario. It has been found in the Port Franks area, Point Pelee, Pelee Island, Point Anne, and at two sites in the Belleville area. It is estimated that the Canadian population consists of about 893 individual plants.

Dwarf Hackberry is a sun-loving, drought-tolerant, perennial woody plant. It is monoecious (both male and female flowers on the same plant), and is wind-pollinated. Flowers appear in late May to early June, singly or in clusters. The fruit matures in late summer and is mostly bird-dispersed, although mammals, such as Raccoons, are also known to eat it. Dwarf Hackberry can live up to between 40 and 64 years, depending on its location. In more dynamic sites, it is likely to be short-lived due to storms and rising lake levels. Dwarf Hackberry grows in areas where Common Hackberry is also found, and there may be hybridization between these two native species. Dwarf Hackberry is an important host plant for butterflies, gall insects, twig borers, bark beetles, and scale insects. Several rare insects, including beetles that have recently been identified in Canada, also depend upon the Dwarf Hackberry for part of their life cycles.

Habitat loss due to industrial activities, such as limestone quarrying and sand extraction, is the main threat to Dwarf Hackberry in Canada. Bark beetle infestations have been known to cause significant mortality in some years.

Dwarf Hackberry in Point Pelee National Park is protected by the Canada National Park Act, and individuals at other sites are within provincial parks or a nature reserve owned by the Nature Conservancy of Canada.

Summary of Progress to Date Broad recovery approaches or strategies for the Dwarf Hackberry, across a portion of its range, have been included in An Ecosystem-based Recovery Strategy for the Eastern Prickly Pear Cactus – Lake Erie Sand Spit Savannas in Canada. This recovery strategy pertains specifically to the Eastern Prickly Pear Cactus, however other species at risk of federal and provincial significance are associated with the recovery strategy, including the Dwarf Hackberry. Summary of Research/Monitoring Activities Inventories of the Dwarf Hackberry and other species at risk have been undertaken within its habitat. Monitoring and mapping of this species’ habitat also are underway. Volunteers from the Nature Conservancy of Canada’s (NCC) Conservation Volunteers program have assisted the NCC in their inventory of the Dwarf Hackberry on their property at Port Franks. Ecological Land Classification (vegetation community type) mapping has been undertaken at the Lake Erie Sand Spit Savanna sites where the Dwarf Hackberry is found. Detailed monitoring of the Point Pelee National Park population is planned for the summer of 2007. The information obtained from these surveys will be used to update a Managed Area Assessment of the status of Dwarf Hackberry at Point Pelee National Park. Summary of Recovery Activities Workshops and alvar field tours are contributing to increased public awareness and participation in stewardship planning. URLs Ontario’s Biodiversity: Species at Riskhttp://www.rom.on.ca/ontario/risk.php?doc_type=fact&lang=&id=53