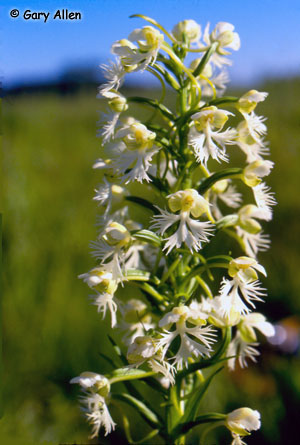 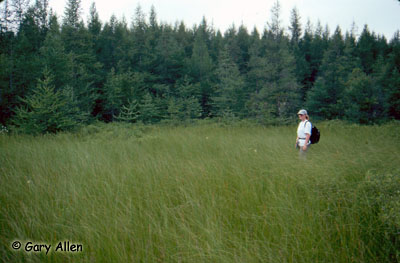 The Eastern Prairie Fringed-orchid is a 0.5 to 1 m tall plant with long thin leaves, and a spike of 10 to 40 whitish flowers. The flowers, borne at the end of the flower stalk, are 1.8 to 2.5 cm wide and have a prominent fringed petal that is divided into three parts. Flowering occurs from late June to late July. Seed capsules ripen on the plants in late August or early September and release thousands of tiny seeds.

The distribution of the Eastern Prairie Fringed-orchid is centred around the Great Lakes, and the orchid reaches the northern extent of its range in southern Ontario. Estimates reported in 2003 are based on maximum counts made over the 1990s, and indicate that there are about 1050 Eastern Prairie Fringed-orchids across 20 populations in southern Ontario. There are also 14 known historical sites from which the orchid is extirpated.

The Eastern Prairie Fringed-orchid is a perennial plant that requires three to seven years to grow from seed to flowering size. It overwinters as a tuber with roots and a shoot bud. In spring, the bud begins developing and the young shoot emerges in late May. The tuber elongates and increases in size throughout the growing season. A new shoot bud and tuber form before winter. The Eastern Prairie Fringed-orchid is notorious for large fluctuations in population size, and is adapted to changes in water level. It may remain dormant underground, or not flower, in areas that are either too wet or too dry. After several years of apparent absence, mass flowerings sometimes are produced when conditions are suitable. The flowers release fragrances at night that attract hawk moths; the moths feed on nectar and transfer pollen from flower to flower and from plant to plant. Seed germination and proper plant growth depend on a symbiotic (mutually beneficial) relationship between the plants' root system and a fungus that is present in the soil.

The Eastern Prairie Fringed-orchid is most threatened by the limited amount of appropriate habitat that is available to it, and the continued loss of that habitat through its conversion to cropland. Other limiting factors include competition with alien invasive species, successional change, human impacts on water tables, and the collection of plants. Deer will graze on the flowering stems, and are sometimes abundant in habitats where the orchid grows, but the magnitude of this potential threat is currently unknown. Any threat to hawk moths (the pollinators of Eastern Prairie Fringed-orchids), such as the use of insecticides or habitat loss, is also a threat to the orchid.

The Eastern Prairie Fringed-orchid does not receive any specific protection under Ontario provincial law.