Scientific Name: Setophaga kirtlandii
Other/Previous Names: Dendroica kirtlandii
Taxonomy Group: Birds
COSEWIC Range: Ontario
COSEWIC Assessment Date and Status Change: April 2008
COSEWIC Status: Endangered
COSEWIC Status Criteria: D1
COSEWIC Reason for Designation: This warbler is a globally endangered species that occurs in very small numbers in Ontario and possibly Quebec. It is a habitat specialist and extremely vulnerable to cowbird nest parasitism. Habitat management and cowbird control in Michigan, the core of its range, have resulted in population increases, which could provide a source of birds for Canada. However, the U.S. population is still small and the number of sightings in Canada has remained low and constant since 1990, so there is no evidence of rescue for the Canadian population.
COSEWIC History of Status Designation: Designated Endangered in April 1979. Status re-examined and confirmed in April 1999, May 2000, and April 2008.
SARA Status: Schedule 1, Endangered
Date of Listing (yyyy-mm-dd): 2003-06-05 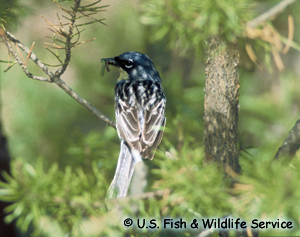 Kirtland’s Warbler breeds in Michigan, Wisconsin, Ontario and possibly Quebec. The species has been reported from Minaki, Ontario, in the west, to Kazabazua, Quebec, in the east. The earliest records of Kirtland’s Warbler in Canada date back to 1900. Singing males in suitable breeding habitat have been recorded sporadically since the early 1900’s particularly in the Petawawa area. There are two confirmed breeding locations in Ontario, Canada. One is from 1945 near Barrie, Ontario, and then a small population has been successfully breeding at Garrison Petawawa from 2007 through 2015. Kirtland’s Warbler spends the winter in the Bahamas; it has also been sighted in the Turks and Caicos Islands and the Dominican Republic. The current size of the Kirtland’s Warbler population in Canada is unknown. The largest number of singing males recorded at any one time from a specific area was the three recorded at CFB Petawawa in the summer of 2006. Two males and one female were recorded from the same location the following year. Given the availability of suitable habitat, the population is likely to be greater than three individuals, but it is probably fewer than ten. There is no information on population trends for Kirtland’s Warbler in Canada. Kirtland’s Warblers from Michigan could come to Canada to breed, since large distances and extensive areas of open water do not appear to create a barrier to dispersal. However, the population in the United States is still small and the number of sightings in Canada has remained constant since 1990, so there is no evidence of rescue for the Canadian population.

During the breeding season, Kirtland’s Warbler is restricted to young jack pine growing in dense stands with small openings. It prefers young jack pine to mature pines, which do not have branches near the ground. These stands may have regenerated after wildfire or timber harvest. Today, however, most Kirtland’s Warblers breed in jack pine plantations specifically managed for this bird species. The species is typically found in tracts of forest larger than 30 ha, and the percentage of nests with fledglings (i.e., breeding success) is highest in stands that are larger than 80 ha. Kirtland’s Warblers nest on the ground on well-drained, sandy soils where blueberries typically grow.   It is difficult to determine habitat trends for Kirtland’s Warbler because, unless specific management is undertaken, preferred habitat is constantly changing as stands mature. However, it appears likely that suitable habitat is not limited in Canada.

Kirtland’s Warblers are generally monogamous. First breeding occurs at one year of age, and clutch size ranges from three to six eggs. Kirtland’s Warblers are unusual among birds of the parulid family in that they nest in loose colonies; the nests are constructed on the ground at the base of young jack pines, thus forming a sort of colony. In early fall, all individuals migrate from their breeding areas to the Bahamas, where they spend the winter. Kirtland’s Warblers feed on insects, such as spittlebugs, aphids and ants, and on blueberries. The average life expectancy of this migratory species is estimated at four years.

One of the main factors limiting the population of the Kirtland’s Warbler is habitat loss resulting from fire suppression. At one time, the supply of extensive patches of young jack pine suitable for the species was renewed on an ongoing basis by fires caused by lightning. Today, fire suppression prevents the regeneration of young pine, thereby limiting Kirtland’s Warbler habitat.   In the past, habitat loss through permanent conversion of jack pine stands to agriculture or forestry reduced the amount of suitable habitat for this species. Fragmentation and isolation of jack pine stands may also have contributed to decreases in Kirtland’s Warbler populations. The species prefers larger patches of jack pine, and activities that fragment forest patches could cause the population to decrease.   Kirtland’s Warblers are particularly vulnerable to nest parasitism by the brown-headed cowbird; in some regions, cowbird parasitism has severely reduced breeding success. Female cowbirds remove one or more eggs from Kirtland’s Warbler nests and replace them with their own eggs, which are then incubated by the warblers. Cowbird eggs hatch before the warbler eggs, so the warbler chicks are trampled by the cowbird chicks. Any warblers that do hatch die of hunger because the cowbird nestlings, which are larger and more aggressive, out-compete the warbler nestlings for food.   Available wintering habitat could also be reduced by hurricanes in pine forest habitat in the non-breeding areas in the Bahama islands.

Summary of Progress to Date The Kirtland’s Warbler recovery team aims to determine whether there is a breeding population of Kirtland's Warbler in Canada and, if so, to undertake activities to maintain or increase the population. Surveys of potential Kirtland’s Warbler habitat are ongoing and although singing males are occasionally found in early succesional pine habitats in Ontario, no breeding has been confirmed.