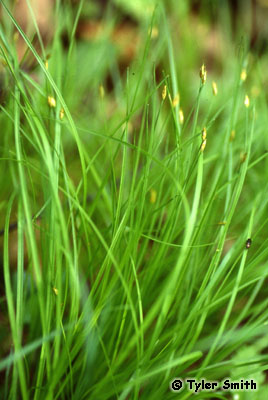 The Bashful Bulrush (sometimes called the Few-flowered Club-rush) is an herbaceous perennial sedge that grows from short rhizomes and forms small clumps. It has short (10 to 40 cm), erect, flat, grass-like leaves and each clump produces several to several dozen 10 to 20 cm high flowering spikes which are triangular in cross-section (a characteristic of sedges). Each spike consists of several small, petal-less flowers that are rather inconspicuous.

The Bashful Bulrush has a rather limited range in northeastern North America, most of it in the United States. In Canada, it is at the northern extremity of its range and occurs only in southwestern Ontario. It is confined to the western Lake Ontario shoreline which has one of the warmest climates and longest growing seasons in the province. It was known to occur in seven populations in two areas (Toronto and Hamilton). Three of these populations could not be found in 1999, and the species has declined by at least 50% in three others. The total Canadian population was assumed to be less than 20 clumps at that time, however fieldwork conducted in 2000 resulted in hundreds of additional clumps being located. The Canadian population is now thought to number several hundred to a thousand clumps, confined almost entirely to the Royal Botanicals Gardens nature sanctuaries.

The Bashful Bulrush grows in open-canopied deciduous and mixed forests that have few shrubs in the understory. Because it requires warmth and good drainage, it tends to occur on semi-open to open, steep slopes that face south or southwest. It is usually found in areas where there are occasional natural disturbances.

A southern species, Bashful Bulrush is able to grow only in the warmest parts of Ontario. In spring, each clump produces many delicate flowering spikes. The flowers are wind pollinated, and the seeds are dispersed in late July to early August. The leaves and stems become matted to the forest floor by late July. Some leaves survive through the winter and form the base of the plant in the spring.

Bashful Bulrush occurs in the warmest and most highly urbanized areas of Ontario. The species may be sensitive to disturbance levels, requiring moderate disturbances to maintain appropriate habitat conditions, while being negatively impacted by severe human disturbance. It is also thought that competition from other species may be detrimental to the bulrush. Currently, the species is threatened by erosion-control measures to stabilize the slopes where it is found, trampling by animals (one site occurs near a fox den entrance), pedestrians, joggers and cyclists, and shading by trees and shrubs.

The Bashful Bulrush is protected by the Ontario Endangered Species Act in specific locations. Under this Act, it is prohibited to kill, harm, harass, or collect this species, or to destroy its habitat.

Summary of Progress to Date The Bashful Bulrush recovery team aims to ensure the long-term survival of Canadian populations. The team recognizes that an incomplete understanding of the plant’s ecology and of the threats it faces currently hampers recovery and has identified knowledge gaps that need to be addressed for effective recovery planning to take place. Summary of Research/Monitoring Activities Researchers are working to ascertain what is limiting Bashful Bulrush populations in Ontario. The species’ habitat requirements have been studied since 2000. Ecological Land Classification surveys conducted for all populations in Cootes Paradise Nature Sanctuary (managed by Royal Botanical Gardens) assessed whether all available habitats are occupied; and results have shown that this is not the case. Furthermore, Bashful Bulrush does not occur in the adjacent Hendrie Valley, in spite of the availability of suitable habitat. These results indicate that Bashful Bulrush is limited by something other than availability of suitable habitat. Researchers are conducting demographic studies to determine at which life stage(s) the plant is being limited; for example, researchers will assess seed production, seed dispersal, germination rate, mortality of seedlings and adult mortality. Potential threats to Bashful Bulrush that are being examined include human disturbance, predators/pathogens, competition (including non-native species) and potential loss of genetic variability. The Royal Botanical Gardens is investigating the use of prescribed burns, which may benefit the species. Summary of Recovery Activities Seeds have been collected from Cootes Paradise populations to create a garden population as a back-up and to maintain a gene bank for the species. Captive propagation techniques have been successfully developed. Garden populations will not be used for population augmentation or reintroduction unless researchers determine that such action is advisable.