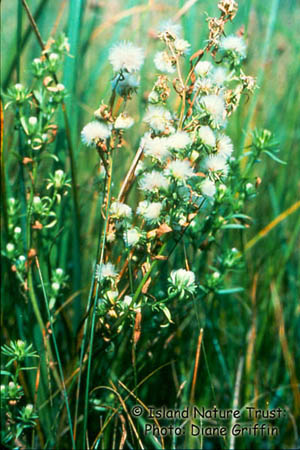 The scientific name of the Gulf of St. Lawrence Aster is Symphyotrichum laurentianum, which is a synonym of Aster laurentianus.

The Gulf of St. Lawrence Aster is a fleshy annual plant. The stem of this herbaceous plant measures between 0.1 and 40 cm in height and it can be simple or divided into several clusters of branches or, occasionally, of elongated branches. The leaves are very soft, fleshy and smooth. The leaves emerge directly from the stem and measure 1.1 to 6.5 cm in length by 2 to 9.8 mm in width. The contour is whole and the leaves can vary in shape from an elongated, narrow lance to a spatula. The tip of the leaves is more or less rounded and often ends abruptly in a short stiff point. Flowers are grouped in a single flower head, or capitate, giving them the appearance of a single flower. Each ramification of the stem bears a head measuring 0.5 to 1.4 cm in width. The flowers are surrounded by small green leaves, called bracts, joined in a bell-shaped receptacle at the base of the head. These bracts are longer than they are wide. They are rounded at both ends and are shaped like either a lance or spatula. The majority are fleshy and often have small marginal hairs, or cilia, at the base. They measure 5 to 11 mm in length and 1 to 2.5 mm in width. The flowers range from a whitish to a pinkish colour and they are both fertile and thread-shaped. The flowers outside of the head are arranged in several rows and measure 2 to 5 mm in length. The centre of the head contains few flowers, which measure 3 to 5.4 mm in length. The broad part of the petals is bell-shaped and lined with 4 or 5 fairly similar small teeth near the purplish heart of the flower. The Gulf of St. Lawrence Aster produces dry fruits, called achenes, which are covered with small fine hairs. The achenes are topped with many aigrets, or silky tufts equalling or overtopping the flowers.

All known Gulf of St. Lawrence Aster populations occur in coastal habitats such as beaches, lagoons, dunes, dune slacks and dry stretches of salt marshes. This annual grows in moist, mostly sandy soil where flooding only occurs during extremely high tides and storms. It grows in slightly sloped, open terrain near sea level in areas where the dunes provide a fair degree of shelter from the wind.

The Gulf of St. Lawrence Aster flowers from late August to early September. Fruits develop in late September and they are dispersed by wind and water in late October. This is a self-fertile species, which means that the Gulf of St. Lawrence Aster can reproduce on its own without any contribution from neighbouring plants. The Gulf of St. Lawrence Aster requires full sun for growth. Competition with other species for this resource appears to play a significant part in the dynamics of these populations. Any reduction in the available light has a major impact on distribution throughout a given site. Soil salinity and dryness have a significant inhibiting effect on seed germination and plant growth. Since seeds can probably survive for a decade, they may remain in the soil until conditions are favourable.

Competition with other species plays a major role in the dynamics of Gulf of St. Lawrence Aster populations. The reduction of available light due to an increase in plant cover is among the main factors that influence its growth. In addition, natural disturbances caused by waves, ice and storms play a major role in habitat maintenance. In particular, fluctuations in high-tide levels can flood populations and storms can bury them completely in sand, causing their disappearance. In addition, disturbances caused by man, such as the construction of cottages and backfilling operations, completely destroy this species’ habitat. Although several sites currently enjoy a certain protection, past disturbances of this type have resulted in the loss of at least two sites. All-terrain vehicles may have a positive impact, at least temporarily, since they create openings in the plant cover. However, the long-term impact of these disturbances will depend on the extent of the immediate damage to plants and their habitat, and on the future potential for major erosion.

In Quebec, all sites where the Gulf of St. Lawrence Aster is found are under provincial jurisdiction, since beaches are the responsibility of the Ministère du Développement durable, de l’Environnement et des Parcs, and dunes and dune slacks are the responsibility of the Ministère des Ressources naturelles et de la Faune. Most of the sites on Prince Edward Island are in Prince Edward Island National Park. As for the Tignish site, the wet sand marsh is on littoral land, which is under provincial jurisdiction. In New Brunswick, there is a Gulf of St. Lawrence Aster population in Kouchibouguac National Park. Two other sites are on land with multiple owners, including the government. Although the Bouctouche site is in a conservation management area, it is nonetheless on private land.

Summary of Progress to Date Of the 16 populations inventoried to date, three have disappeared while no individual has been observed in the past two years in four other populations. Thus, nine populations subsist, most of them are small. It is important however to specify that since the Gulf of St. Laurence Aster is an annual plant, its numbers vary considerably from year to year due to anthropogenic or natural disturbances. Summary of Research and Monitoring Activities Seeds collected at a seed bank on Miscou Island (New Brunswick) are being cultivated and tested for viability and longevity in a greenhouse. Some seeds from the bank are also being planted outside the greenhouse to verify if they will produce viable seeds in return and to find out if they will germinate in nature. Many surveys have been conducted since 1988 and the results indicate a high temporal variation, both in the number of individuals and the area occupied. Since these studies were conducted by different teams using separate methodologies, a standardized information gathering protocol was developed and implemented in 2004, which will allow a standardized long-term follow-up essential to understanding the species situation. The species introduction to sites that are apparently favourable but unoccupied has produced mixed results. Indeed, even though seeds have germinated and seedlings have emerged, no fruit has been produced. Since the Gulf of St. Laurence Aster is an annual species, new site colonization seems to be limited by fructification aspects. Summary of Recovery Activities The persons in charge of the Coastwatch Program in the Acadian Peninsula are working with other organizations to promote appropriate use of the vulnerable coastal habitat. Local schools are receiving interpretation and educational documentation to increase coastal species at risk awareness and promote stewardship measures. Local landowners and special interest groups are being contacted to increase participation in species protection. Three floristic habitats were established under the Act respecting threatened or vulnerable species in 2005, while two other populations are protected through a wildlife refuge. The restoration efforts will have to ensure the ecological integrity of these habitats through the application of regulatory measures governing the use of the sites. To this effect, the municipalities, the protected area managers and the Attention Frag’Îles organization involvement will be conclusive. Part of the seedstock of the Gulf of St. Lawrence Aster is transferred to permanent storage (e.g. Acadia University facilities) for a long-term protection. URLs Canadian biodiversity: Endangered species – Gulf of St. Lawrence Asterhttp://www.canadianbiodiversity.mcgill.ca/english/species/endangered/endangeredpages/ast_lau.htmParks Canada Agency: Kouchibouguac National Park of Canada:http://www.pc.gc.ca/pn-np/nb/kouchibouguac/natcul/natcul1c_e.aspPlantes menacées ou vulnérables au Québechttp://www.mddep.gouv.qc.ca/biodiversite/especes/aster-stlaurent/aster.htm (available in French only)