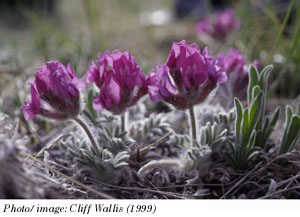 Hare-footed Locoweed (Oxytropis lagopus var. conjugans) is a member of the Fabaceae (pea family). It is a perennial forb, having a stout taproot crowned by leaves and large, purple, attractive flowers. Despite its attractiveness it has little interest for the horticultural trade. Plants can be poisonous to livestock, especially horses. Parts of the plant have medicinal properties and they were used by First Nation peoples to treat several ailments. [Updated by COSEWIC - May. 2014]

There are three varieties of Oxytropis lagopus: atropurpurea, conjugans and lagopus. Variety conjugans is restricted to the prairies in southern Alberta and western Montana. The other two varieties occur in Montana, Wyoming, and Idaho, USA. In Canada, Hare-footed Locoweed is known from 11 subpopulations in an area of approximately 229 km2 on the uplands of the Milk River Ridge and Del Bonita Plateau in southern Alberta. The number of subpopulations in Montana is unknown. The nearest US subpopulation is approximately 48 km south of the Canadian-USA in Glacier County, Montana. Hare-footed Locoweed occurrences are fragmented and sites that comprise one to several dozen plants may be separated by several kilometres. One subpopulation, south of Cardston has been extirpated within the last 40 years. Currently there are 11 subpopulations, of which one subpopulation needs to be confirmed to be extant. [Updated by COSEWIC - May. 2014]

In Canada, Hare-footed Locoweed grows within the Foothills Fescue and Mixedgrass Subregions south of Lethbridge. Plants grow on thin gravelly soils in open grassland at elevations between 1,189 and 1,995 m (3,900 to 6,545 feet) in Alberta. Native rough fescue grassland communities, in which it occurs, are themselves becoming rarer and are considered a high priority for conservation efforts. A notable characteristic of the habitat descriptions is the almost continuous cover of microbiotic crust (primarily lichens) and Dense Spikemoss. There is also indication that a calcium carbonate (limestone) component to substrate materials may be important. [Updated by COSEWIC - May. 2014]

Hare-footed Locoweed blooms in late April to early June. The flowers are insect-pollinated. The plants take advantage of spring moisture and pods mature early in the year. Seed predation by insects may be heavy in some years and annual seed production is likely to fluctuate between years and localities. Seed is dispersed primarily by gravity. Wind and rodents may also contribute to seed dispersal. The longevity of the seed in the soil and the state of the seed bank is unknown. [Updated by COSEWIC - May. 2014]

Gravel extraction, energy (oil and gas) development, cultivation, off-road vehicles, road building and intensive livestock grazing have, and potentially may, contribute to habitat loss and modification. Recent observations have also concluded that the invasive species Crested Wheat Grass is adversely influencing the numbers of plants in at least five occurrences. These plants are likely direct competitors for nutrients, water and light and may contribute to habitat modification. [Updated by COSEWIC - May. 2014]