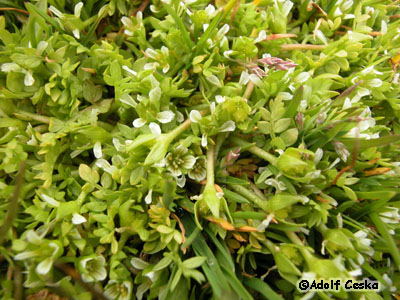 Macoun's Meadowfoam is a small annual plant that measures 2 to 5 cm in height. When small the plants stand erect, when large they droop. The leaves measure 1 to 7 cm in length; fully developed plants have 2 to 5 leaves. The small single white flower measures 7 to 10 mm in diameter. The fruit are small greyish-green to brown nuts that measure 3 mm in length.

In Canada, Macoun's Meadowfoam is found only in British Columbia.

Habitat destruction or modification is the greatest threat to populations of Macoun's Meadowfoam. This is due to the fact that this plant grows in waterfront areas with excellent climatic conditions - areas that are also choice residential locations. Competition with introduced plant species is also a major threat. Invasive species such as various exotic grasses, sub clover (Trifolium subterraneum), field burrweed (Soliva sessilis), and bulbous bluegrass (Poa bulbosa) are taking the place of Macoun's Meadowfoam.