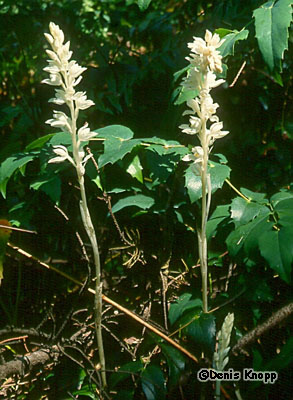 The Phantom Orchid (Cephalanthera austiniae) is a myco-heterotrophic epiparasite that lacks chlorophyll and derives its food from a three-way partnership with an underground fungus and a tree species. The white flowering stem stands up to 55 cm tall. White sheaths up to 10 cm long clasp a smooth leafless stock topped by up to 20 white flowers. The noticeably vanilla-scented, aromatic flowers have a yellow throat. Fibrous roots branch from a slender rhizome. (Updated 2017/05/25)

The Phantom Orchid is the only North American representative of the genus Cephalanthera. It is found only in the Pacific Northwest, in California, Oregon, Washington, Idaho, and British Columbia (BC). In BC, it occurs only in the extreme southwest, with subpopulations reported from southeast Vancouver Island, Saltspring Island, and the lower Fraser Valley. (Updated 2017/05/25)

In BC, the Phantom Orchid is found in relatively undisturbed old growth, mature and occasionally older second growth forests. It is typically found in coniferous or mixed forests and it requires an intact below-ground (ectomycorrhizal) fungal network. In BC, the Phantom Orchid usually grows in sites with sparse ground cover and thick leaf litter although it is also occasionally found in areas with a high cover of forbs and shrubs. In BC, the Phantom Orchid is found at elevations ranging from 0-550 m, on a range of slopes (0-92%) and the majority of sites are south to southwest-facing. Some sites in BC occur on soils with elevated pH including bedrock with carbonate materials, shell middens, and limestone quarry tailings. Litter from Bigleaf Maple or other trees may play a role in making the soil pH more alkaline than in other sites. (Updated 2017/05/25)

Phantom Orchid does not flower every year and although the flowers indicate the presence of the orchid, they do not reflect the full extent of the below-ground plants. Plants may have periods of dormancy and it is unclear what factors trigger the production of flowering stems. Flowering is staggered over the growing season from early May to mid-July with unconfirmed reports of flowering stems emerging as late as September. The pollinators of the Phantom Orchid in BC are not known. The Phantom Orchid can self-pollinate and other Cephalanthera species are known to have substantial levels of inbreeding, suggesting that they also self-pollinate. Like other orchids, Cephalanthera species produce large numbers of very tiny seeds that are dispersed by wind, generally with short dispersal distances (i.e. less than 6 m). In BC, very few of the flowering stems produce capsules or mature seed. The Phantom Orchid receives its food via a parasitic connection to mycorrhizal fungi, which are in turn associated with the roots of a tree species. The health of both the tree species and the mycorrhizal fungus is critical to the survival of the orchid. Molecular studies of populations in the United States found the Phantom Orchid was exclusively associated with a fungus of the family Thelephoraceae. (Updated 2017/05/25)

The primary threat to Phantom Orchid is habitat destruction from the rapid increase of new housing development. The majority of Phantom Orchid sites occur on private property (12 of the 20 subpopulations have some or all sites on private land). Phantom Orchid occurs on private property owned by 22 different landowners and several of the landowners intend to subdivide. Homeowner activities including maintenance and construction of both buildings and gardens, inadvertent mowing and trampling can threaten the Phantom Orchid. The Phantom Orchid is also threatened by forest harvest activities, which can destroy habitat directly and/or by altering hydrology/light conditions, removing host trees, destroying the fungal partner, creating edge effects, and increasing fragmentation. Recreational activities including hiking and dirt-biking can also damage plants and habitat. Other threats include competition from invasive plants, plant collection, overgrazing by deer, impacts associated with small isolated populations, and threats to partner species. (Updated 2017/05/25)