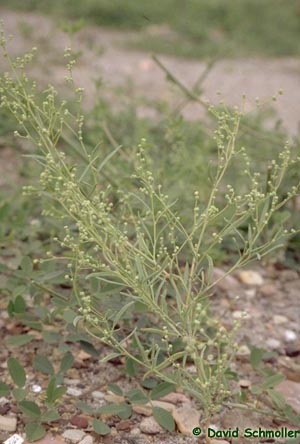 Smooth Goosefoot is a shallow-rooted, erect annual measuring 20 to 80 cm in height, with ascending branched stems. The light green leaves are alternate, fleshy, single-veined and almost hairless. The long, narrow, leaves are 1 to 3 cm in length and 1 to 2 mm in width on average. The small greenish or reddish flowers are produced in widely spaced small rounded clusters. They produce dry fruits, or achenes, that are yellow to light brown. Each achene contains a single shiny, black, lens-shaped seed that is 1.2 to 1.6 mm in diameter.   In the past, Smooth Goosefoot was considered a variety of the Narrow-leaved Goosefoot, but the Smooth Goosefoot can be distinguished by its hairless nature and its seeds that measure over 1 mm in width.

Smooth Goosefoot is found in North America, from the southern Prairie provinces of Canada to Utah and Colorado, and from Washington State and Nevada to the Dakotas, Nebraska and Iowa, in the United States. In Canada, Smooth Goosefoot is found in southern Alberta and southwestern Saskatchewan and Manitoba.   In Alberta, the species is represented by nine widely scattered populations, occurring within six different sand hill areas: Grassy Lake, Middle Sand Hills, Rolling Hills Lake, Dominion, Medicine Lodge Coulee and Pakowki Lake.   In Saskatchewan, the species occurs from Saskatoon south to Piapot, and from the Alberta border east to Caron. Historically, there were 12 populations in the dunes of Dundurn, Birsay, Elbow, Pelican Lake, McMahon, Cramersburg, Broderick, Burstall and Piapot.   In Manitoba, the species is recorded at Oak Lake in the Routledge Sand Hills and the Spruce Woods Provincial Park in the Brandon Sand Hills. These two sites are considered to be isolated since there are no known populations or suitable habitats in eastern Saskatchewan.   Although new populations of Smooth Goosefoot were discovered in Saskatchewan in 2004, four populations along the South Saskatchewan River and one in a sandy area where the sand hills are mostly covered in vegetation are likely no longer extant.     In 2004, there was a significant increase in the number of Smooth Goosefoot in Saskatchewan, probably triggered by the abundant late summer precipitation. A few thousand plants were observed in Saskatchewan in 1997 and 1998, but in 2004 the population was estimated to be 8400. The total Alberta population in the late 1980s was several hundred. At the Dominion Sand Hills site, fewer than five plants were seen in 1987, but there were at least 40 in 2004. In Manitoba’s Routledge Sand Hills in 2004, plants were observed for the first time in 45 years. It is not known whether a population boom occurred at sites other than in Saskatchewan in 2004, but given similar climate conditions all over the prairies, it seems likely.   Because this is an annual plant, population size fluctuates widely in response to climatic conditions. However, even though plants may not be growing at a site in a given year, seeds are likely present in the seed bank; this makes the overall Canadian population trend difficult to determine. The 2006 estimated population in Canada was likely between 5 200 and 10 000 individuals.

In Canada, Smooth Goosefoot inhabits unstable sand areas. This species is one of the first plants to colonize active (i.e. moving) sand dunes and plays a role in dune stabilization, a process caused by vegetation colonization. It is commonly found on the stabilizing edges of active (moving) dunes and occasionally on bare or recently disturbed sand plains, where it generally grows on south- or west-facing actively eroding slopes. It has also been found on river sand bars and sandy floodplain terraces. Populations are highest in areas of finer and more compacted sand. The species rarely grows in very active sand away from the stabilization zone. Many plants are often associated with Smooth Goosefoot, mostly species of sand-berry, sagebrush and juniper.   Dynamic factors such as grazing, erosion and fire may aid in destabilizing sand, resulting in more habitat for Smooth Goosefoot.

Very little information exists on the biology of Smooth Goosefoot. It is an annual species that reproduces sexually using seeds. Flowering occurs from June to August and seed production, in August and September. In Canada, the species produces fruit and seed at most sites. The seeds may remain viable for many years, waiting for the moist conditions to favour germination. Although studies on seed germination have not been conducted for this species, the abundance of goosefoot observed in Saskatchewan in 2004, coupled with the observation that the summer was unusually humid and cool, suggests that maximum seed germination occurs under moist conditions.   Although no studies on the pollination of Smooth Goosefoot have been performed, other species in this genus are self-pollinating, that is, their flowers are pollinated by their own pollen. The wind is responsible for the transport of pollen.   Like all plants that grow in dry, salty areas, Smooth Goosefoot is able to physically adapt in order to survive both excess salt in groundwater and the low amount of available water. Since this species is able to colonize shifting sand, it plays a role in dune stabilization. At several sites in Alberta and Saskatchewan, there were specimens of Smooth Goosefoot that had been grazed. Grazing may have been by cattle or wildlife. Grazing causes some plants to produce side shoots.   The achenes and seeds of Smooth Goosefoot lack structures that would aid in dispersal by wind (i.e. hairs) or animals (i.e. burs or fleshy fruits). The fruit likely fall close to the parent plant and may be buried by shifting sand. Smooth Goosefoot has seeds that can remain dormant until suitable conditions for germination occur, as is typical of several rare annuals in the prairies. The seeds are food sources for small rodents, such as the Ord’s Kangaroo Rat, a species at risk nationally.

There has been considerable loss of habitat throughout this species' range as a result of dune stabilization. The progressive stabilization of sand dunes caused by vegetation colonization is considered a serious threat to all populations of Smooth Goosefoot in Canada.   In addition to loss of habitat, the species is also threatened by competing exotic plants. Indeed, invasive exotic weeds are observed at several sites across the species' range and are threatening to invade its habitat. For example, the dune slack at the Barnwell, Alberta, site is being invaded by Crested Wheat Grass and different species of White Sweetclover.   Grazing, perhaps by both cattle and wildlife, is a threat to certain populations. The large tracts of uncultivated grassland east of the mountains are mostly grazed by livestock. Recent research suggests that grass-fire control and grazing may have an impact on dune stabilization. Indeed, a combination of fire and grazing during appropriate seasons helps keep dunes active.   Fire control is also another factor threatening the survival of the species. In the past, fire, both natural and human-caused, played a major role in maintaining grasslands by slowing the succession of many trees and shrubs, while ensuring a continuous supply of safe sites for the germination and establishment of herbaceous meadow plants, including Smooth Goosefoot.   Oil and gas development is rapidly expanding in the sand hill complexes of Saskatchewan. Oil extraction infrastructure appeared adjacent to the Routledge Sand Hills in Manitoba as well. This type of activity potentially harms the species due to sand dune destruction or possible oil or gas spills.   Recreational activities in active dune areas may result in the loss of some Smooth Goosefoot plants. Some dunes are used for intense recreational activities, such as horseback riding, all-terrain vehicle driving, and hiking. These activities cause loss of vegetation and disturb the soil.