Scientific Name: Yucca glauca
Taxonomy Group: Vascular Plants
COSEWIC Range: Alberta, Saskatchewan
COSEWIC Assessment Date and Status Change: May 2013
COSEWIC Status: Threatened
COSEWIC Status Criteria: Does not strictly meet any criteria, but assessed Threatened because of interdependency with its Endangered sole pollinator.
COSEWIC Reason for Designation: This long-lived perennial is known from only three sites in southeastern Alberta and southwestern Saskatchewan, where it occurs mainly on south facing coulee slopes.  Plants are pollinated exclusively by Yucca Moth, which lays eggs in the flowers. In Canada, the species reproduces almost exclusively by vegetative spread. Seed production is limited by low numbers of Yucca Moth pollinators, while seedling establishment is negatively impacted by lack of natural disturbance, including fire suppression. Herbivory of flowering stalks by native ungulates also limits seed set.    Despite improved management to limit the impact of threats, this perennial is designated Threatened. It is the only host for Yucca Moth, Non-pollinating Yucca Moth and Five-spotted Bogus Yucca Moth, all of which were assessed as Endangered.
COSEWIC History of Status Designation: Designated Special Concern in April 1985. Status re-examined and designated Threatened in May 2000 and May 2013.
SARA Status: Schedule 1, Threatened
Date of Listing (yyyy-mm-dd): 2003-06-05 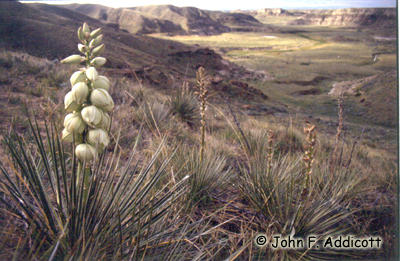 The Soapweed is a large, drought-tolerant perennial with a broad crown of leaves emerging from a short woody base. The stiff, narrow and pointed leaves are 20 to 50 cm in length. The 50- to 100-cm flower stalk that emerges from the middle of the plant is topped by a cluster of creamy white, 5-cm flowers. The fruit is a dry capsule that contains thin, flat, disc-shaped seeds that are light enough to be dispersed by wind.

Soapweed occurs from Texas north to Alberta and from the Rocky mountains east to the Mississippi River. Four populations are known to occur in Canada where the species is at the northern edge of its range. Two natural populations and one of unknown origin occur in southern Alberta, and an introduced population occurs in southern Saskatchewan. These populations occupy a small area but contain a fairly large number of plants and appear to be stable.

Soapweed is a species of arid regions. In Canada, it is found in shallow, alkaline soils on coulee slopes.

In Canada, the Soapweed flowers in early May. It and the Yucca Moth engage in a unique obligate mutualism. The moth is the plant's sole pollinator, but its larvae feed exclusively on developing Soapweed seeds. The fruits mature by the end of July, and the surviving seeds are dispersed by wind and gravity. Seedling growth is slow, but individual plants can be very long-lived. The species also forms clones by vegetative reproduction.

Possible loss of habitat and consumption of flowers by herbivours (deer, antelope and cattle) may be limiting the Canadian populations of Soapweed. The apparent disappearance of the Yucca Moth from one population and low moth numbers at the other threaten the long-term survival of the only two populations confirmed to have been naturally established in Canada.

Summary of Progress to Date Soapweed and the Yucca Moth are interdependent species, thus they are dealt with through the concurrent efforts of the Soapweed/Yucca Moth Recovery Team. A provincial recovery action plan has been developed and implementation is beginning. Summary of Research/Monitoring Activities Population monitoring is taking place in collaboration with other planned recovery activities. Summary of Recovery Activities The recovery plan defines management actions for the protection and conservation of Soapweed and Yucca Moth while respecting the livelihoods and values of the ranching community and other compatible land use activities. Initial recovery efforts for this species should focus on the identification and conservation of existing population(s). A protocol is being developed to effectively translocate Yucca Moth populations from sites with fruiting Soapweed plants to areas where the plants are not reproducing successfully. Translocation helps to maintain the interdependent relationship of Soapweed and the Yucca Moth and to prevent the extirpation of these species. Management of industrial and agricultural impacts is taking place. An outreach and education project for prairie species at risk, including Soapweed and Yucca Moth, has been initiated at the Etzikom Windmill Museum (Etzikom, AB) in cooperation with the local museum society. Recovery actions will include collaboration with university graduate student research projects. URLs MULTISAR: The Milk River Basin Project:http://www3.gov.ab.ca/srd/fw/speciesatrisk/pdf/SAR_87.pdf Alberta Sustainable Environment: Alberta Species at Risk Programhttp://www.srd.gov.ab.ca/fw/speciesatrisk/