Scientific Name: Charadrius montanus
Taxonomy Group: Birds
COSEWIC Range: Alberta, Saskatchewan
COSEWIC Assessment Date and Status Change: December 2021
COSEWIC Status: Endangered
COSEWIC Status Criteria: D1
COSEWIC Reason for Designation: This shorebird of shortgrass prairies reaches the northern limits of its breeding distribution in extreme southern Alberta and Saskatchewan. It has become exceedingly rare in Canada, with no observations since 2012, although small numbers may persist in areas with little survey effort. Historically, the population is believed to have declined primarily as a result of habitat loss from agricultural intensification and fire suppression. Temperature extremes and changes to habitat related to climate change are also of concern. Immigration from outside Canada is unlikely, because the nearest potential source population in Montana is also small and declining.
COSEWIC History of Status Designation: Designated Endangered in April 1987. Status re-examined and confirmed in November 2000, November 2009, and December 2021.
SARA Status: Schedule 1, Endangered
Date of Listing (yyyy-mm-dd): 2003-06-05 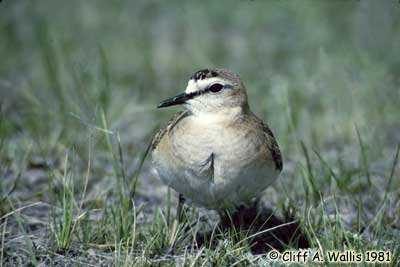 The Mountain Plover is a medium-sized bird with a buff-grey back and wings and whitish underparts that are washed with buff. Breeding birds have a white forehead, black on top of the head and thin black eyeline. Non-breeding birds and juveniles lack the black markings on the head and are buffier on their undersides. The species’ call is a distinctive low harsh krrip.

The species breeds in the western Great Plains, from southern Canada to Texas. The winter range is primarily in California but the species also winters in northern Mexico, southern Arizona and southern Texas. In Canada, the Mountain Plover breeds in southeastern Alberta and southwestern Saskatchewan; birds in these two areas are considered two sub-populations of the species. The North American range has contracted from earlier times, especially along its eastern edge. In fact, the Breeding Bird Survey revealed that the decline in this species from the 1960s to the early 1990s was larger than that of any other endemic grassland bird (bird species restricted to grasslands). Scientific survey data are lacking, but during the last two decades there have probably been less than 50 adult Mountain Plovers in Canada. In the Alberta sub-population, a maximum of 11 adults was recorded in 1981, compared with two adults in 1985.

Mountain Plovers inhabit flat areas with short vegetation (usually less than 10 centimeters high) and bare ground. Grazing animals and Black-tailed Prairie Dogs play important roles in keeping the habitat suitable for the species. Mountain Plovers prefer heavily grazed grassland, but areas with light grazing that have been burned recently can provide suitable habitat for the birds. Cultivated fields are also used for nesting, especially in the southern part of the North American range. In Canada, the bird usually nests in grazed, or recently burned, areas of native mixed grassland. As a result of various factors, both historical and more recent, Mountain Plover habitat has become both localized and restricted in size.

Birds of this species have a high degree of site fidelity, meaning that they usually return to the same general area to nest. If old sites are no longer suitable, the birds find new habitat. On the Canadian breeding grounds, nesting commences in May. The female lays a clutch of three eggs in a depression on the ground. To increase nesting success, the female often leaves the male to incubate the eggs while she lays a second clutch. Eggs hatch in about 1 month and the young leave the nest at about 35 days. Nesting success (or fledging rates) is quite low and ranges from one chick for each nest to one chick for three nests. In at least one area, mountain plover nesting success varies among years. It has been suggested that drought conditions lead to low fledging rates, probably because predation rates are higher when food is in short supply. From mid/late July to November, the birds are found in family groups or post-breeding flocks across their breeding grounds. The Mountain Plover is considered to be highly mobile and to have the potential to disperse widely.

The decline in the continental population of Mountain Plovers is attributed to the conversion of native grassland to cropland, agricultural practices, management of domestic livestock, decline of native herbivores, and possibly pesticides. In Canada, the major threat is range management practices, which discourage heavily grazed grassland and thereby restrict suitable breeding habitat. The resulting small, isolated breeding populations are vulnerable to natural events such as weather extremes and predation.

Summary of Progress to Date The recovery team is working to maintain the naturally small breeding population of Mountain Plovers in Canada and increase awareness of their needs and possible threats. Since the Mountain Plover is peripherally located in southern regions of Alberta and Saskatchewan, recovery efforts have not proven to be worthwhile to date. Thus the main recovery goal is to maintain its recent distribution and abundance in Canada. Short-term success for Mountain Plover recovery can be gauged by the uncovering of new breeding sites, identifying threats to the species and its habitat, and promoting stewardship at those sites. Long term successes will be established through the maintenance of breeding Mountain Plover in southern Saskatchewan and Alberta. Unfortunately, little is known about this species and its population trends at this point. Summary of Research/Monitoring Activities Researchers propose to conduct systematic surveys for breeding Mountain Plovers once the birds have arrived from their over-wintering sites, and again during the nesting season. If the birds are found nesting, the size of the breeding population, the habitat use, and the nesting success is documented. Using existing databases, landscape information is being collected to identify habitat conditions and priority areas in need of conservation or additional surveys. Summary of Recovery Activities Specific, targeted searches are being conducted for the Mountain Plover because our knowledge of the abundance and distribution of this rare, cryptic species is very limited with only 44 birds having been recorded in Canada in the last 125 years. A habitat stewardship program, MULTISAR, is implementing a process to provide appropriate habitat management on critical areas of the landscape and emphasizes voluntary stewardship activities to achieve conservation of species at risk, including the Mountain Plover. Their main goals are to conserve and enhance species habitat and native grassland ecosystems and to conserve and increase key areas of grassland ecosystems of the Milk River Basin in Alberta. Outreach programs are being established with the intention of targeting individual landowners and encouraging them to secure, enhance, and restore habitats in the prairies. Areas in need of habitat conservation are currently being identified. URLs Mountain Plover Habitat and Population Surveys in Alberta, 2001:http://www3.gov.ab.ca/srd/fw/speciesatrisk/pdf/SAR_37.pdf MULTISAR habitat stewardship program:http://www.multisar-milkriverbasin.com/