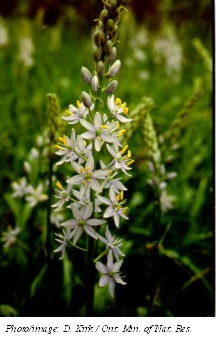 Wild Hyacinth is a showy, spring-flowering, bulbous plant of the lily family. It has star-shaped flowers that are blue, bluish-purple or white, with six petals and bright yellow anthers (the male part of the flower that produces pollen). The flowers grow in clusters of 5 to 100 (typically 15 to 35) at the top of a 25- to 70-cm flowering stalk, which is surrounded by small thin leaves at its base. Different colours of flowers can be found within the same population.

The Wild Hyacinth is found from the southwestern United States through the Mississippi valley to the Great Lakes basin. It reaches the extreme northern edge of its range on the Lake Erie islands in Ontario within Essex County. There are currently six known populations of Wild Hyacinth in Canada. Estimates in 1998 and 2001 revealed that five populations are large - they contain between 2000 and 5000 or more individuals each - and are apparently stable. A sixth population has been reduced to 15% of its previous size, and an additional population has recently been lost. Both of these populations have declined as a result of damage caused by droppings deposited by nesting cormorants (see "Threats" below). Two other populations occurred in Ontario, but they were lost to housing development.

This plant grows in deciduous forests and in hawthorn scrubs, where soil is rich in organic matter but where limestone bedrock is close to the surface. The Wild Hyacinth needs a long growing season as well as a hot climate that is humid during the spring and dry during the summer.

The Wild Hyacinth flowers in mid-spring when pollinating insects are abundant. By mid-summer the flowers have faded and the stalks lie on the ground. By late summer they are completely obscured by surrounding vegetation. Wild Hyacinths typically multiply by seed, but they can also be grown from bulbs. Seed pods on the flower stalks split open, releasing the seeds in the immediate vicinity of the parent plant. The seeds are apparently not attractive to insects, such as ants, that would take the seeds further away. The plants grow in quite dense clusters, and it is not known what mechanism initiates a new colony. Individual plants usually live longer than twenty years, and colonies are made up of plants of mixed ages. The starchy bulbs are edible and were likely used as a source of food by native people and early European settlers.

The Wild Hyacinth is vulnerable to loss of habitat to housing and cottage development. One population has recently been lost and another significantly affected by large colonies of nesting cormorants. These cormorant colonies have increased dramatically in recent years and are having a direct impact on the habitat. The cormorants are killing much of the vegetation (including the trees where they nest), and their nutrient-rich excrement supports a dense weed population.