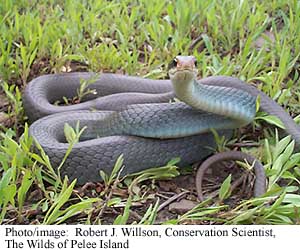 The Blue Racer is a subspecies of the racer. It is a large, long slender snake with a whiplike tail, an elongated head, relatively large eyes, and smooth lustrous scales. The dorsal part of the reptile is a uniform grey, metallic green, or metallic blue, while the ventral parts are bluish-green or whitish. Young Blue Racers have grey or brown blotches on the back. The Blue Racer is one of Ontario’s largest snakes — adults may reach up to 1.5 m in snout-to-vent length. (Snakes are typically measured from the tip of the nose [snout] to the anus [vent], which excludes the tail.)

During the summer, Blue Racers live in open habitat with abundant cover, such as dense woody and/or herbaceous vegetation, rock outcrops, and hedgerows. Blue Racers hibernate in quarries, in old cisterns, and in areas where limestone bedrock is close to the surface.

Blue Racers are active during the day and typically hunt rodents, small birds, and snakes. They in turn are hunted by larger birds of prey, such as the Red-tailed Hawk, the Great Horned Owl, and the Northern Harrier, and by such mammals as raccoons, foxes, and Coyotes. Blue Racers mate during the spring. Females can reproduce annually but more likely do so once every two years. They lay an average clutch of 14 eggs in decaying wood, sawdust piles, rubbish heaps, sandy loam, or under rocks or wood. Nests shared with other Blue Racers or Eastern Fox Snakes have been observed on Pelee Island. Mortality of eggs and young snakes is very high. Blue Racers migrate toward overwintering sites in September and away from them during May and June. It is not known where young Blue Racers hibernate, but individuals three years and older are known to hibernate communally, sometimes sharing denning sites with snakes of other species. When compared with other racer populations in North America the Blue Racers on Pelee Island range over an extremely wide area — the average range is 75 ha for females and 140 ha for males. It may be that because the habitat on Pelee Island is fragmented, snakes have to travel greater distances to obtain the resources they need.

Loss of habitat is an important limiting factor for Blue Racers. They inhabit an area that is densely populated by humans, and much of their habitat has been lost to development. Furthermore, Blue Racers appear to be less tolerant of high levels of human activity than other species of snakes. Accidental killing of snakes on the roads and the deliberate killing of snakes by humans are two other significant threats to the continued existence of the subspecies in Canada.

The Blue Racer and its habitat are protected under regulations connected with Ontario’s Endangered Species Act. It is also listed as "specially protected" under the Ontario Fish and Wildlife Conservation Act, which makes it illegal to capture, harass, trade, or kill individuals of the species in Ontario. Conservation authorities and the Ontario Ministry of Natural Resources protect some areas of suitable Blue Racer habitat.

Summary of Progress to Date The Blue Racer recovery team hopes to achieve a minimum of two secure Blue Racer populations in Ontario, which requires increasing the population on Pelee Island to a self-sustaining level and re-establishing at least one population on the Ontario mainland. The feasibility of re-establishing a population in the snake’s former mainland range is being evaluated. Summary of Research/Monitoring Activities Mark-recapture and telemetry studies have been used to map the habitat that Blue Racers currently use on Pelee Island, and analyses have been conducted to better understand the snake’s habitat requirements. These studies, among others, have also been used to identify causes of mortality and threats to the Blue Racer. Blue Racers were surveyed on Pelee Island during 2000-2002. Population monitoring will take place by conducting surveys using consistent methodology. Summary of Recovery Activities The overall approach being taken to stabilize the Pelee Island population of Blue Racers is to protect important habitat and, where possible, restore land to suitable habitat, as well as reduce mortality. The key habitat features that require protection are hibernacula and nesting areas. Because both hibernacula and nesting sites appeared to be limited in number, several artificial sites have been created at suitable locations across the island. Larger scale habitat restoration of prairie and alvar habitats is taking place via prescribed burns to reverse ecological succession and planting native species. Most Blue Racer habitat, however, occurs on private land, and public support is vital for this species’ recovery. Outreach activities include educational presentations, a display at the Pelee Island Heritage Center, a video about Pelee Island’s ecology (including the Blue Racer) shown on the ferry to Pelee Island, and a brochure about Pelee Island’s natural heritage. Conservation organizations have restored several private farmland properties by planting native prairie plants.