Scientific Name: Emydoidea blandingii
Other/Previous Names: Emydoidea blandingi
Taxonomy Group: Reptiles
COSEWIC Range: Nova Scotia
COSEWIC Assessment Date and Status Change: November 2016
COSEWIC Status: Endangered
COSEWIC Status Criteria: B1ab(ii,iii,iv,v)+2ab(ii,iii,iv,v); C2a(i)
COSEWIC Reason for Designation: The current population size is < 500 mature individuals. The three main subpopulations are genetically distinct from each other and from other populations in Québec, Ontario, and the United States. Although the largest subpopulation occurs in a protected area, its numbers are still declining, possibly still showing the effects of historical mortality that took place 30-60 years ago. The other subpopulations are susceptible to increasing habitat degradation from forestry activities, recreation, water-level manipulation, and cottage development. Two subpopulations are very small (< 5 adults) and may not be viable. Threats across the range include increased pressure from predators, mortality from on- and off-road vehicles, vulnerability to collection, potential impacts of exotic predatory fishes, and the effects of climate change.
COSEWIC History of Status Designation: Designated Threatened in April 1993. Status re-examined and designated Endangered in May 2005 and November 2016.
SARA Status: Schedule 1, Endangered
Date of Listing (yyyy-mm-dd): 2006-08-15 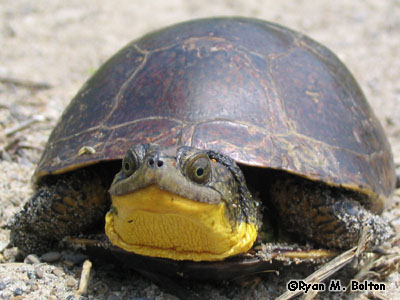 The Blanding’s Turtle, Emydoidea blandingii, is the only representative of the genus Emydoidea. It is a medium-sized freshwater turtle with a characteristic bright yellow throat and a highly domed black shell with yellowish spots and flecks. It has one of the smallest global ranges compared to most other North American turtles and only ~20% of its global range occurs in Canada. [Updated 22/01/2018]

In its Canadian range, the Great Lakes/St. Lawrence population of the Blanding’s Turtle occurs primarily in southern Ontario (with isolated reports as far north as Timmins) and southern Québec (with isolated reports occurring as far north as the Abitibi-Témiscamingue region and as far east as the Capitale-Nationale region in Québec). The much smaller Nova Scotia population occurs in the southern portion of the province and represents the most isolated population within the species’ range. In the United States, the Blanding’s Turtle occurs in the northeastern states, and is mainly concentrated around the Great Lakes; however, it occurs as far west as Nebraska and South Dakota and there are small isolated populations along the Atlantic seaboard in New York, Massachusetts, New Hampshire and Maine. Across the North American range, Blanding’s Turtles mainly occur in small, isolated subpopulations that maintain a few dozen to approximately 100 turtles. In Canada, most monitored subpopulations appear to maintain fewer than 150 adults, with none exceeding 1000. The size of the Blanding’s Turtle Great Lakes/St. Lawrence population is impossible to estimate accurately, given that very few mark-recapture studies have been conducted throughout the region, but is believed to harbour 60% of the population was lost due to large-scale wetland drainage after European arrival, and a further decline of > 50% is projected over the next three generations based on observed trends for monitored subpopulations and road mortality models. The long-term mark-recapture program in Québec has found fewer than 200 adults to date; although no trends have been confirmed for this subpopulation, it has likely also declined due to historical wetland loss and ongoing anthropogenic threats. [Updated 22/01/2018]

The Blanding’s Turtle is an exceptionally long-lived and late-maturing species, even for a turtle. Blanding’s Turtles mature between 14-25 years of age and can continue to reproduce successfully until at least 75 years old. Mature females produce one clutch of eggs every 1-3 years and female fecundity and reproductive frequency are positively correlated with age. Females carry out long-distance nesting migrations and can make overland movements of >10 km. The Blanding’s Turtle’s ability to make long-distance movements facilitates gene flow among wetlands and may substantially increase reproductive success. The mean generation time for Canadian Blanding’s Turtles is ~40 years. [Updated 22/01/2018]

This species faces numerous threats, the most serious of which include: (i) road/rail mortality and associated road effects; (ii) habitat loss due to the invasive European Reed, various types of development and wetland modifications; (iii) illegal collection for the pet, food and traditional medicine trades; and (iv) increased mortality of individuals and nests from subsidized predators. Additional potential threats include: mortality from aggregate, forestry, energy production and recreational activities; wetland pollution; climate change and the introduction of other invasive species. The most serious threats to Blanding’s Turtle subpopulations are those that result in the mortality or loss of adults. The main limiting factors for this species are its slow life-history (extreme longevity, very late age of maturity, low annual reproductive output, low juvenile recruitment, and a dependency on high annual adult survival) and short, cool summers at the northern periphery of the range, which reduce turtle reproductive frequency and nest success. These limiting factors make the Blanding’s Turtle highly vulnerable to even small increases (

The Blanding's Turtle, Nova Scotia population, is protected under the federal Species at Risk Act (SARA). More information about SARA, including how it protects individual species, is available in the Species at Risk Act: A Guide.

Summary of Progress to date In Nova Scotia, Blanding’s Turtles are restricted to the south-western interior of the province where there are at least three small genetically distinct populations. In 2005, COSEWIC up-listed the Nova Scotia population of the Blanding's turtle from threatened to endangered, based partly on a population viability analysis that indicated at least one of these populations was declining. In 2000, Blanding's Turtles were declared endangered under the Nova Scotia Endangered Species Act. These decisions were based, in part, on the species’ limited distribution within the province, the population’s uneven age structure, and the low rate of recruitment into the breeding population. The Blanding’s Turtle Recovery Team has been in place since 1993 and there is a well-established research and stewardship program underway to protect turtles and their habitats, locate additional populations, and ascertain the true status and threats to the population. The goal of the Blanding’s Turtle recovery plan is to maintain and restore, where appropriate, the population size and structure through the maintenance and restoration of habitat and ecological processes. High adult survivorship is critical in this long-lived (70+ years) species. Summary of Research/Monitoring Activities Researchers have been individually marking Blanding’s Turtles in Kejimkujik National Park and National Historic Site (KNPNHS) since 1969 and monitoring their nesting activity annually since 1992. Research on populations outside the Park began in 1996 and has increased in recent years. The primarily student-driven research team has investigated various aspects of the turtle’s biology including population genetic structure, overall range in Nova Scotia, nesting behaviour and nest success, hatchling movements, over-wintering ecology, juvenile growth, habitat characteristics, age-relate survivorship, and population trends. Researchers have been conducting studies on genetic variation throughout the North American range since 1995. Research has shown that the Nova Scotia population has significantly diverged genetically from populations in the main range and harbours a significant portion of the total genetic biodiversity of the species. Within Nova Scotia, the three known populations are genetically distinguishable suggesting that there is very little movement of turtles between them. Differences in behaviour, habitat use, growth rates, adult size, and clutch size also have been recorded among them. Summary of Recovery Activities Of the three known populations of Blanding’s Turtle in Nova Scotia, one occurs in a National Park, one primarily in a combined provincially and privately protected area, and one in a working landscape dominated by small private landholdings. This diversity presents an array of conservation and management opportunities. Recovery activities in working landscapes have incorporated research and public education and outreach, allowing science and stewardship to converge. Recovery activities to date have involved collaborations with government, industry, local organizations, and community members. A volunteer-based nest protection program was established in KNPNHS in the 1990’s and has since expanded to the two known populations outside the Park. Each night during nesting season, volunteers and researchers monitor known nesting sites and observe females as they go through the nesting process. Once a turtle nest is complete, a wire-mesh cage is placed over the nest to protect it from predators. In recent years, over 1000 hours of volunteer effort each year has helped protect more than 30 nests annually. This program is continuing to expand to provide local community members, and other volunteers, opportunities to be directly involved with many aspects of recovery. Since 2002, researchers have been captivity rearing hatchlings in an area where we know the population has declined over the past 40 years in an attempt to boost the population size. Hatchlings are raised in captivity for the first 1 or 2 years of life and then released back into the population when they have reached a large enough size to reduce their risk of predation. Because Blanding’s Turtles are slow to mature (20+ years), there is a long lag between the time researchers initiate recovery actions, such as protecting nests or rearing hatchlings, and the time new adults begin to appear in the breeding population as a result of these actions. URLs Nova Scotia’s Blanding’s Turtles Conservation and Recovery:http://www.speciesatrisk.ca/blandings/