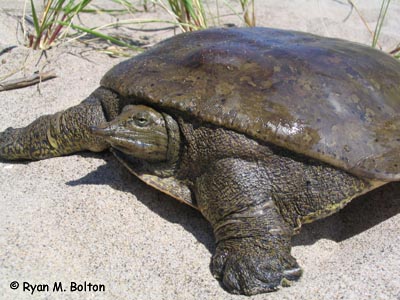 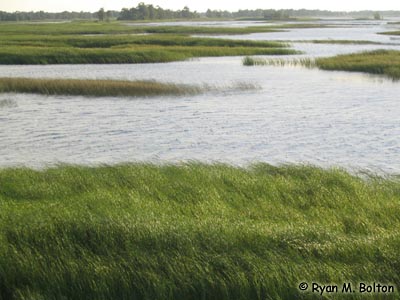 Spiny Softshell turtles (Apalone spinifera) are conspicuously sexually size-dimorphic, with males reaching a carapace length of 22 cm, and females 54 cm. The carapace is olive to tan, relatively flat, round to oval and covered in leathery skin, with spiny projections along the anterior edge that are most conspicuous in adult females. Spiny Softshells are well adapted for swimming, with a reduced lower shell, hydrodynamic shape and strongly webbed front and hind feet. The neck is long, and can extend to approximately 3/4 the length of the carapace. The head is relatively narrow and elongate with a long, snorkel-like snout. Members of the family Trionychidae have a global distribution and diverged from other turtles in the Cretaceous. The species is significant because it is the only native representative of the family Trionychidae in Canada. Canadian populations are at the northern limit of the species’ range, and are adapted to a northern climate (e.g., extended hibernation). Unlike other Canadian turtles, where the sex of an individual is determined by the temperature of egg incubation, sex of Softshell turtles is genetically determined. (Updated 2017/01/16)

Spiny Softshell can live for several decades. Sexual maturity occurs late, and likely not before 12 - 15 years for females at the northern limit of the range in Canada. Influenced by climate, the life cycle of the species is characterized by a long hibernation and a short, active growing season. Cumulative heat units during the active season determine the time necessary to complete incubation. Eggs are typically laid in June or July, with an average clutch size of approximately 20. It is thought that most females deposit a single clutch annually, but some females lay two clutches in a single year. The incubation period generally varies from 60 to 75 days, and ambient nest temperatures can delay or accelerate incubation. Natural recruitment is low because of high egg predation. (Updated 2017/01/16)

The primary threats are habitat and population fragmentation by infrastructure, alteration of the water regime (flooding of nests) by dams and changing weather patterns, increased recreational and agricultural use of nesting areas and adjacent aquatic habitats by humans (disturbance during nesting, ATV use, horseback riding, watercraft use), invasion of nesting areas by non-native plants (e.g., European Common Reed (Phragmites a. australis)), high populations of mammalian egg predators and egg poachers, injury and mortality from fishing and motor boating (collisions, propellers), and illegal capture of juveniles and adults. Cyanobacterial blooms (e.g., toxin bioaccumulation, impact on prey) may also impact the species. Limiting factors include the time taken to reach maturity, a low rate of recruitment, and the constraint of limited summer heat for completion of incubation and hatchling emergence. (Updated 2017/01/16)

Summary of Progress to Date Most of the conservation activities for the Spiny Softshell take place in coordination with the Thames, Ausable, and Sydenham River Recovery teams. Summary of Research/Monitoring Activities Population surveys are being conducted in potential softshell habitat in Ontario and Quebec. Inter-population movement patterns are being documented through radio-telemetry studies. Over a nine day period in 2005, staff and volunteers surveyed a core section of the Sydenham River looking for turtles. They observed a total of 45 Eastern Spiny Softshell Turtles and 32 Map Turtles. The turtle sightings, basking and nesting sites were recorded using a GPS unit. Information from this survey is useful to determine if the populations of these species are remaining stable and helping to provide valuable insight into the specific habitat needs of these special turtles. Several years of recapture, documenting physical measurements, and individually marking the turtles also is providing important information for future turtle identification and conservation. This data allows researchers to determine life expectancy, growth rates, surviving male to female ratios, age of sexual maturity, etc. Summary of Recovery Activities In 1996, a landowner contact and education campaign was conducted along the Thames and Sydenham Rivers. The goal of this project was to educate private landowners about the softshell and encourage them to take an active roll in maintaining their property so that it would continue to be available for use by softshells. There has been ongoing communication with several landowners about turtle sightings on their properties and the Spiny Softshell recovery team is now working with one of these landowners to enhance potential Eastern Spiny Softshell Turtle nesting habitat on his property. The Conservation Authority continues its efforts to bring the story of the Sydenham River to the residents of the region. A newsletter was distributed to 37,000 households which updated the efforts that are being made to help species at risk within this ecosystem. A new display was produced which was used at several events over the year. Students also got involved by participating in programs designed to bring the issue of local species at risk into the classroom and a Public Service Announcement was aired on the NewPL over 3 two week periods. URLs Wildlife Preservation Canada:http://www.wptc.org/wildlife/spinyturtle.cfm Toronto Zoo: Spiny Softshelled Turtle:http://www.torontozoo.com/Animals/details.asp?AnimalId=487 Canadian Museum of Nature: Eastern Spiny Softshell Turtle:http://www.nature.ca/notebooks/english/esturtle.htm Thames River Recovery Plan:http://www.thamesriver.on.ca/Species_at_Risk/terms_of_reference.htm#Overview%20of%20the%20Thames%20Watershed Aquatic Species at Risk in the Sydenham River Watershed:http://www.sydenhamriver.on.ca/ Aquatic Species at Risk in the Sydenham River Watershed newsletter:http://scrca.on.ca/Publications/SARNewsletterMarch2006.pdf