Scientific Name: Colinus virginianus
Taxonomy Group: Birds
COSEWIC Range: Ontario
COSEWIC Assessment Date and Status Change: May 2013
COSEWIC Status: Endangered
COSEWIC Status Criteria: B1ab(iii)+2ab(iii); D1
COSEWIC Reason for Designation: Owing to habitat loss, this grassland bird’s population has declined dramatically over historical levels and shows no sign of recovery. There is only one viable population remaining in Canada, located on Walpole Island, Ontario. The status of this species is complicated by the presence of introduced pen-reared birds whose genetic composition is believed to pose a threat to the remaining native population.
COSEWIC History of Status Designation: Designated Endangered in April 1994. Status re-examined and confirmed in November 2003 and May 2013.
SARA Status: Schedule 1, Endangered
Date of Listing (yyyy-mm-dd): 2005-07-14 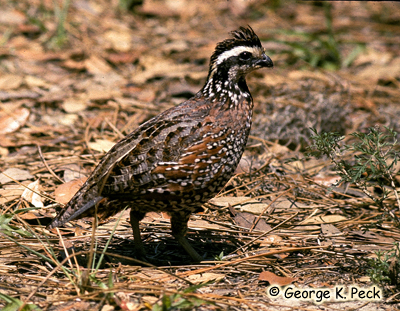 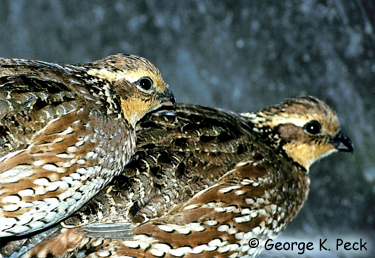 The Northern Bobwhite, Colinus virginianus, (French name: Colin de Virginie) is a member of the New World quail family Odonotophoridae. It is a small, grouse-like bird; males have a black necklace, white throat and a white line above the eye, females have a buffy throat and eye-stripe. (Updated 2017/05/24)

The Northern Bobwhite is found from southeastern Wyoming east to Massachusetts south through eastern Mexico to western Guatemala. In Canada it is found only in southern Ontario, with natural populations likely restricted to Walpole Island and perhaps the adjacent mainland. It has been introduced to many other areas with limited long-term success. (Updated 2017/05/24)

The Northern Bobwhite requires an early successional habitat that can be provided in a variety of vegetation types. Minimally it requires an interspersion of grassland, cropland, and brushy cover. In Ontario it is now usually associated with cultivated lands rather than native prairie fringes. In Ontario there were originally thousands of hectares of long-grass prairie in the extreme southwest. After settlement by Europeans, the creation of numerous small farms with diverse crops, inefficient harvest methods and large weedy hedgerows greatly enhanced the potential for bobwhites, and resulted in the tremendous population increase. But, through the previous century, the trend has been away from pasture and summer fallow, and natural prairie has been all but eliminated. Habitat fragmentation is also ongoing, and may be a more significant problem than overall habitat loss. (Updated 2017/05/24)

The nest is a shallow depression in the ground lined with plant material covered with grasses or vines arched over it for concealment. The mean clutch size is 12 to 16 eggs; incubation takes 23 to 24 days and the downy young can fly at an age of 6 or 7 days. Only one brood is typically raised per season at the northern edge of the range. Nests with eggs have been found from late May through mid-September, but the likelihood of successful hatching or fledging decreases as the season progresses. Mean nesting losses may be 60 to 70 percent. About 80 percent of the fall population consists of juvenile birds and the mean annual mortality of the species (including young birds) is about 80 percent. Adult annual survival is about 30 percent. Northern Bobwhite are nonmigratory, but in fall some birds disperse several kilometres. Winter coveys require a minimum of 4.9 ha and rarely use more than 20 ha. (Updated 2017/05/24)

Habitat quality and quantity are the main factors limiting populations, as natural prairie habitat has all but disappeared and agricultural habitats have become less suitable through intensification. Continued reintroduction efforts have been ineffective and may be contributing to the continuing population decline through the introduction of inappropriate genetic stock. (Updated 2017/05/24)