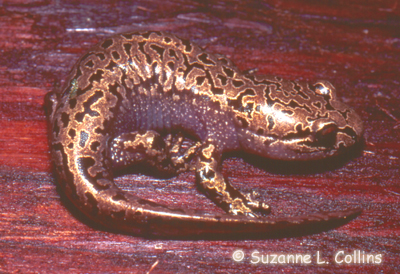 The Coastal Giant Salamander (Dicamptodon tenebrosus), formerly known as the Pacific Giant Salamander, is a large stream-dwelling salamander. The genus Dicamptodon consists of four species in the Pacific Northwest; only the Coastal Giant Salamander is found in Canada. The salamanders can attain a total length of 35 cm (including tail). Coastal Giant Salamanders have an aquatic and a terrestrial life stage. Aquatic larvae have a dark back with light underbelly, shovel-shaped head, external gills, and tail fin. Larvae can attain sexual maturity and remain aquatic (neotenic) or transform into terrestrial adults; neotenic adults remain obligate stream-dwellers. Terrestrial adults are robust and broad-headed; the colour is dark brown to black on the back usually with tan or copper marbling. This species is the largest semi-aquatic salamander in North America and the only salamander capable of true vocalizations with adults emitting bark-like cries when disturbed. (Updated 2017/05/25)

The distribution of the Coastal Giant Salamander extends along the west coast of North America from southwestern British Columbia, through the Cascade and Coast mountain ranges, to northwestern California. In Canada, the Coastal Giant Salamander occurs only in extreme southwestern British Columbia south of the Fraser River in the Chilliwack and adjacent small drainages. (Updated 2017/05/25)

The Coastal Giant Salamander has been found at elevations from sea level to 2160 m in a variety of lotic environments ranging from small seepages and mountain streams to large rivers and lakes. They breed mostly in mountain streams, where larvae spend multiple years developing. A number of factors influence the species’ occurrence in streams, including elevation, stand age of surrounding forest, gradient, substrate, wetted width, and riparian forest cover. Transformed juveniles and adults inhabit surrounding riparian and upland forests. Terrestrial Coastal Giant Salamanders are usually found in close proximity (within 50 m) to streams, where they utilize a variety of refuge sites such as root channels, spaces under logs and rocks, and small mammal burrows. Studies have shown that larvae and adults move relatively little, and individual salamanders may spend their entire life cycle in one stream. Connectivity among populations is likely maintained through dispersing adults moving along streams or across upland forest. (Updated 2017/05/25)

The reproductive biology of the Coastal Giant Salamander in British Columbia is poorly known. The female deposits a clutch of 135-200 eggs on the underside of a rock in an aquatic nest chamber within a creek or stream, probably once every 2 years. Larvae may take up to 6 years to reach metamorphosis. The best approximation of life span comes from studies of similarly sized aquatic salamanders, which may live up to 25 years in captivity. The generation time is thought to be 10 – 15 years. Coastal Giant Salamanders are highly dependent on moisture, the availability of which constrains their activity and movements. Chilliwack Valley is the northern limit of the Coastal Giant Salamander’s distribution, and low temperatures and short growing season may limit its occurrence both northwards and upwards in elevation. In British Columbia, larvae are rarely detected in streams until water temperatures rise above 5°C, and they become sluggish at temperatures >20°C, suggesting these temperatures approximate the limit of their thermal tolerance. (Updated 2017/05/25)

Main threats to Coastal Giant Salamanders are from logging that continues to degrade habitats across the species’ Canadian range and from siltation of breeding streams resulting from erosion and surface run-off associated with roads and forestry activities. Urban development and run-of-river energy projects pose additional threats to local populations. The Coastal Giant Salamander occurs mainly in and around mid-elevation streams, and its occurrence and breeding activity, in particular in main stems at lower elevations, are curtailed by introduced predatory fish. Thus, even if forested stream buffers are left in otherwise deforested terrain, overland dispersal can be expected to be severely restricted, accentuating inter-stream isolation and population fragmentation. More frequent and severe droughts and flooding events are expected to accentuate impacts of human activities on these salamanders. (Updated 2017/05/25)