Scientific Name: Clemmys guttata
Taxonomy Group: Reptiles
COSEWIC Range: Ontario, Quebec
COSEWIC Assessment Date and Status Change: November 2014
COSEWIC Status: Endangered
COSEWIC Status Criteria: C1
COSEWIC Reason for Designation: This species has an unusually low reproductive potential, including late age at maturity and low fecundity, and occurs in small, isolated subpopulations. Although some subpopulations are in protected areas, there is evidence from extensive monitoring and projected calculated declines that even these populations are in jeopardy despite low exposure to anthropogenic threats. The main threats to the species are road mortality; collection for the pet, food and traditional medicine trade; and habitat loss due to invasive plants and development. There is no potential for rescue from outside populations.
COSEWIC History of Status Designation: Designated Special Concern in April 1991. Status re-examined and designated Endangered in May 2004 and November 2014.
SARA Status: Schedule 1, Endangered
Date of Listing (yyyy-mm-dd): 2005-07-14 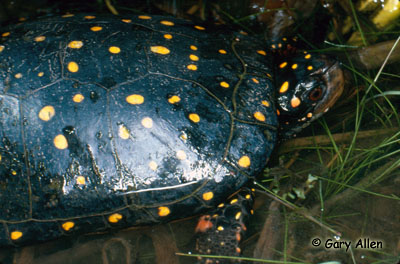 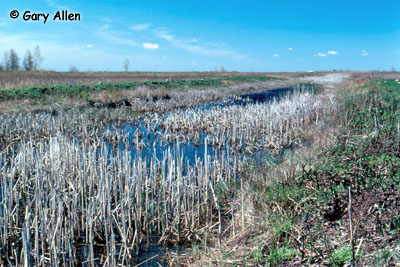 The Spotted Turtle is a relatively small freshwater turtle. In adults, the carapace (upper part of the shell) generally measures less than 13 cm in length. This species can be recognized by its black carapace with orange-yellow spots. In young turtles, the plastron (ventral part of the shell) is black and orange, and occasionally becomes almost completely black with age. The head and limbs are also black with yellow spots, and the tail is occasionally striped with yellow. Both sides of the head are marked by a large orange spot that creates the illusion of ears. As is the case with many turtle species, males and females are different: for instance, in the female, the eyes and beak are orange, the plastron is flat and the tail is slender and relatively short, whereas in the male, the eyes and beak are buff-brown, the plastron is concave, and the tail is thick and longer.

The Spotted Turtle occurs only in eastern North America. Populations are located in southern Ontario and in the United States along the Atlantic Coastal Plain from Maine to central Florida, and westward from the south shores of the Great Lakes to northeastern Illinois. The species has also been observed in Québec, but no population is known to be established in that province. Over the past 30 to 40 years, 104 populations have been noted in Ontario. While these populations are concentrated around Georgian Bay and on the north shore of Lake Erie, there are also small isolated populations in southeastern Ontario. At least 36 of these populations are now considered extirpated or historic. According to some researchers, the virtual disappearance of this species from the province of Quebec and the decline of the Ontario population are due to the deterioration of the habitat and the capture of specimens for the pet trade. Of the handful of known populations, only a few are large enough to ensure long-term survival. In addition, most of these populations are small (all less than 200 individuals) and isolated. Over the last 30 to 40 years, Canadian populations of Spotted Turtles have declined by 35%. The population trend is declining. Moreover, the ongoing disappearance of wetlands in southern Ontario makes the continued decline of Spotted Turtle populations inevitable. Since the Spotted Turtle is a small turtle that is not very mobile and that inhabits a localized habitat, it is likely that its disappearance from a given site would be permanent. It is difficult to estimate the size of the Spotted Turtle population in Canada. However, summing all of the known populations indicates a total number of 1000 to 2000 individuals. While there may still be a number of undiscovered populations, particularly in the Georgian Bay area, 2000 seems to represent a reasonable estimate of the size of the adult Spotted Turtle population.

The Spotted Turtle prefers the shallow, slow-moving and unpolluted water of ponds, bogs, marshes, ditches, vernal pools and sedge meadows. It can also be found in the tranquil waters of woodland streams and near the sheltered shores of shallow bays. This species’ aquatic habitats are characterized by soft muddy soil, sphagnum moss, sedge tussocks, cattails, water lilies and water-loving shrubs. The Spotted Turtle uses various habitat types depending on the season; this includes terrestrial habitats at certain times in its annual activity cycle. Females dig their nests on land, on sites with sun exposure. In Georgian Bay region, these sites are often soil-filled crevices in the precambrian shield. In southern Ontario, they often nest in groups near man-made dykes, on muskrat nests and at the base of grass tussocks. The Spotted Turtle exhibits fidelity to its hibernation and breeding grounds, which are often communal sites. This aggregative behaviour for reproduction and hibernation makes the Spotted Turtle vulnerable to habitat destruction and capture for the illegal wildlife trade.

Spotted Turtles come out of hibernation from early to late April and then spend a great deal of time basking in the sun on tree trunks and plant tussocks. From May to early June, they gather in aquatic habitats to breed and they tend to return to the same site year after year. Nesting occurs from mid- to late June and is generally a nocturnal activity. Although clutch sizes range from three to seven eggs, the average clutch contains five eggs. Since most females do not lay eggs every year, the reproductive output of the Spotted Turtle is relatively low. Females dig a nest in shallow soil and cover it with lichen, moss and litter. Hatchlings emerge approximately 80 days after the eggs are laid. Some individuals in certain populations avoid the heat and aridity of summer by aestivating (burying in a torpid state); this behaviour generally occurs in a terrestrial site and lasts from July to September when the turtles go into hibernation. The Spotted Turtle survives the harshness of winter by hibernating in sites sheltered from the frost. They often hibernate in groups and return to the same hibernation site year after year. In Ontario, the Spotted Turtle reaches sexual maturity between 11 and 15 years of age. Some individuals that have been observed in Pennsylvania and Ontario were at least 30 years old. Based on recent data, the maximum longevity of a Georgian Bay population was estimated to be 110 years. Predators of the Spotted Turtle include raccoons, skunks, otters, muskrats, minks, Black Bears and Bald Eagles. Eggs are preyed upon by raccoons, Red Foxes, skunks and ants. Since the mortality rate for eggs and juveniles is high, the sustainability of Spotted Turtle populations depends heavily on the survival of adults.

In Ontario, a permit is required to collect wild Spotted Turtles. Quebec has similar laws that apply to all reptiles and amphibians. Approximately 25% of the current populations in Ontario are afforded a certain degree of protection by virtue of the fact that they are on land that is owned, at least in part, by a local nature conservation organization, or on land that is part of a provincial or national park, or a national wildlife reserve. Some populations are located in provincial nature reserves, provincial wildlife management areas or on provincial land or Crown land.