Scientific Name: Glyptemys insculpta
Other/Previous Names: Clemmys insculpta
Taxonomy Group: Reptiles
COSEWIC Range: Ontario, Quebec, New Brunswick, Nova Scotia
COSEWIC Assessment Date and Status Change: November 2018
COSEWIC Status: Threatened
COSEWIC Status Criteria: A2cd+3cd+4cd
COSEWIC Reason for Designation: This turtle is declining across much of its range, where it occurs in small, increasingly disjunct subpopulations, many of which are separated from each other by distances greater than the species can be expected to disperse. It has strong site fidelity, often returning to restricted nesting and overwintering areas for decades. Although it requires both aquatic and terrestrial habitats, it is more terrestrial than other freshwater turtles, making it vulnerable to road kill, land use practices, and collection for the pet trade. Its ‘slow’ life history, characterized by delayed maturation and extreme longevity, requires exceedingly high adult survival to maintain stable populations. Any chronic increase in adult or juvenile mortality, or a catastrophic adult mortality event, is destabilizing and unsustainable. Increased exposure to traffic on paved and unpaved roads, agricultural activity (particularly mowing and tilling), and expanding populations of subsidized predators, as well as changing regimes in watersheds, have increased mortality and placed subpopulations at risk.
COSEWIC History of Status Designation: Designated Special Concern in April 1996. Status re-examined and designated Threatened in November 2007. Status re-examined and confirmed in November 2018.
SARA Status: Schedule 1, Threatened
Date of Listing (yyyy-mm-dd): 2010-02-23 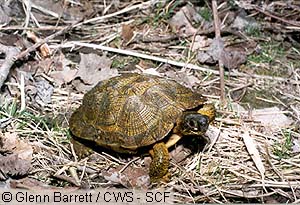 The Wood Turtle is a medium-sized freshwater turtle with a broad flat shell measuring from 16 to 25 centimeters long. The upper shell, or "carapace," is a grayish-brown, sometimes having dark lines and dots. Each scute has pyramidal concentric rings (growth lines), giving the carapace a sculptured appearance. In older turtles, the ridges on the scutes may be worn flat. The shell's underside, or "plastron," is yellow with black splotches and does not have a hinge. The plastron is flat in females and concave in mature males to facilitate mating. Males are slightly larger with a broader head and longer and thicker tail than females. The skin is generally brown, and the legs and neck often a distinctive yellow, orange or reddish colouring. They have strong claws. The upper jaw forms a beak, arched downward over the slightly shorter lower jaw.

The Wood Turtle is distributed throughout northeastern North America. It has a discontinuous range from Nova Scotia west through New Brunswick, Quebec, Ontario and Minnesota and south to Virginia and Maryland.   Populations are distributed in around 13 drainage basins in Ontario, 16 in Quebec and 12 in Nova Scotia. In New Brunswick, the number of populations is unknown but they are believed to occupy several watercourses.     Although the total number of Wood Turtles in Canada is unknown, several quantitative studies completed from 2005 to 2007 provided a very approximative estimate of the Canadian population of between 6 000 and 12 000 adults. Populations in areas difficult to access may be stable, but many Wood Turtle populations accessible by road are in decline and the general trend over the past three generations, or more than 100 years, supports this. The decline is clearly significant in certain parts of Ontario and Quebec.

Like all freshwater turtles, the Wood Turtle needs water for many of its vital functions, including mating, hibernation and temperature regulation. It generally hibernates at the bottom of the water, spends spring and fall in or near water and summers on the ground. However, it is considered a semi-aquatic turtle because it spends a great deal of time on land, although it rarely strays farther than 300 meters from water. This species is associated with rivers and streams with sandy or gravely-sandy bottoms and prefers clear meandering watercourses with a moderate current. The Wood Turtle's natural nesting sites are found on sand or gravel-sand beaches and banks. Although they prefer riparian areas with diverse, patchy cover, females also lay in gravel holes, at the edges of roads and railways, in utility right-of-ways, in farming fields, pastures and former fields – any sunny and easily dug spot.   Other habitats used less frequently by the Wood Turtle include bogs, marshy pastures, beaver ponds, shrubby cover, meadows, coniferous forests, mixed forests, hay, and agricultural fields and pastures.   Even though quantitative historic and contemporary data on changes in the area of available and suitable habitat for the Wood Turtle do not exist, it is evident that this habitat is declining over much of the species' range.

At the start of spring, the Wood Turtle emerges from the watercourse where it spent the winter alone or with other members of its species or with other turtle species. It remains near the water and gradually moves father away as the summer progresses. Wood Turtles reach sexual maturity between 11 and 22 years of age, but maturity depends more on size than age. Mating usually occurs in water, in spring and fall, but can happen at any time between April and September. At the end of spring, females move to the same nesting sites that they use year after year. The female Wood Turtle generally digs her hole in sandy or gravelly riverbanks, beaches or other open areas near water. The female Wood Turtle has only one clutch per year, but not every turtle necessarily reproduces every year. Clutches can contain from 1 to 20 eggs, but usually contain 8 to 12 on average. For Wood Turtles, sex determination is independent of incubation temperature, unlike other turtles. However, temperature has a direct impact on the rate of embryonic development. The eggs hatch at the end of August, in September, or the beginning of October. The Wood Turtle does not incubate its eggs. The sun's heat ensures incubation.   On land, Wood Turtles mainly eat forest berries, young leaves from shrubs (especially alder), flowers, fiddleheads and mushrooms, as well as invertebrates such as insects, slugs and earthworms that the turtle attracts by stomping on the ground. In water, it eats dead fish, snails, tadpoles, insect larvae and algae.   The main predators of adults and juveniles are raccoons, coyotes and foxes. These and other mammals eat the turtle's eggs as well. Various mammals, fish and birds prey on hatchlings.   Although a Wood Turtle's life span is unknown, it is reasonable to believe that it can live more than 50 years in the wild.

Threats to most Wood Turtle populations include increased mortality of adults because of road traffic and modern agricultural machinery, and the destruction of nests by recreational vehicles such as all-terrain vehicles (ATVs) and snowmobiles.   The Wood Turtle is also threatened by lost nesting habitat and hibernacula due to watercourse bank alternations, flooding and shoreline stabilization.   Aside from lost habitat, increased predation of nests by raccoons and possibly coyotes and other mammals is a primary cause of nesting failures.   Turtle collection, for personal or commercial purposes, as a pet or for food, is a growing threat. Recently, various anonymous sources have noted large-scale private collections of Wood Turtles for food purposes and the existence of a network providing native turtles and other wild animals to southern Ontario restaurants. The Wood Turtle is particularly vulnerable to collection, especially in the spring, when it suns and feeds itself along watercourses and the vegetation does not yet camouflage it. Therefore, the semi-aquatic turtle is easy to find and capture because it is not aggressive and cannot escape on land.   In addition, the construction of new forest roads could increase the potential for collection, as previously inaccessible areas become readily accessible and are more often travelled by recreationists. Moreover, roads and bridges could provide new nesting locations that are less than ideal given the presence of vehicles.   Pollution of watercourses used by this species is clearly one of the lesser threats.   Overall, the Wood Turtle is exceptionally vulnerable to increasing access to its habitat by people.   Lastly, with the adults' longevity, late sexual maturity and very low number of juveniles being added to the population each year, the species is vulnerable to any increased adult mortality.

The Wood Turtle has been listed as "endangered" under the Ontario Endangered Species Act and is in the process of being regulated. It is also listed as a "specially protected reptile" under the Ontario Fish and Wildlife Conservation Act (prohibits hunting, possessing, selling, purchasing or taking of any listed amphibian or reptile for educational or scientific purposes except under the authority of a licence and subject to the regulations) and is protected by the same prohibitions under the Act respecting the conservation and development of wildlife. In New Brunswick, the species is not protected by any provincial legislation. In Nova Scotia, it is protected under that province’s Endangered Species Act. Since 2005, the species has vulnerable status in Quebec under the Act respecting threatened or vulnerable species. The species is also protected during forestry operations through an agreement between Quebec’s Ministère du Développement durable, de l’Environnement, de la Faune et des Parcs and the Ministère des Ressources naturelles. In Ontario, Wood Turtle populations mainly live on Crown lands protected under the Species at Risk Act (SARA). However, some portions of three populations are found in provincial parks. In Quebec and New Brunswick, part of one population is found in a national park, where the species is protected under the Canada National Parks Act. In Nova Scotia, a small population is found in a national park and the others are on Crown lands.

The Wood Turtle is also listed in Appendix II of the Convention on International Trade in Endangered Species of Wild Fauna and Flora (CITES) which governs international trade of species that are or could be threatened by commercial exploitation.