Scientific Name: Trillium flexipes
Taxonomy Group: Vascular Plants
COSEWIC Range: Ontario
COSEWIC Assessment Date and Status Change: April 2009
COSEWIC Status: Endangered
COSEWIC Status Criteria: B1ab(iii)+2ab(iii)
COSEWIC Reason for Designation: A showy perennial species currently present at only two small locations in southern Ontario. It has not been found at five additional sites where it was documented historically. This riparian species is at on-going risk of habitat degradation from the invasion of exotic plants. It is also at risk from recreational activities and the effects of stochastic events due to its small population size.
COSEWIC History of Status Designation: Designated Endangered in April 1996. Status re-assessed and confirmed in May 2000 and in April 2009.
SARA Status: Schedule 1, Endangered
Date of Listing (yyyy-mm-dd): 2003-06-05 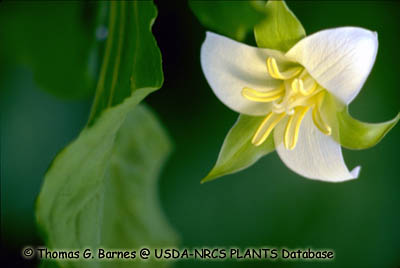 Drooping Trillium (Trillium flexipes) is a member of the Liliaceae, the lily family. No varieties or subspecies have been formally recognized, but one of the many forms has been named, forma walpolei. This reddish or maroon form is likely a hybrid with Red Trillium (Trillium erectum). Drooping Trillium can usually be differentiated from other co–occurring Trillium species by the absence or near absence of leaf stalks and slightly drooping flowers with large, spreading, white petals and a white, ovoid ovary with prominent stigmas. (Updated 2017/06/05)

The historic range of Drooping Trillium includes Ontario and 17 states in the north–central and eastern US. The global maximum extent of occurrence encompasses approximately 850,000 km² but its distribution is discontinuous in much of its range. In Canada, it was historically known from seven sites in Ontario within the Carolinian zone. Populations at five of these sites are now believed to be extirpated. The only confirmed extant sites in Canada are along the Sydenham River at Strathroy and along the Thames River in Dunwich Township near Dutton. Its present Extent of Occurrence in Canada is about 7 km². Its Index of Area of Occupancy based on a 2x2 km grid is 8 km²; the actual area of habitat occupied is 0.08 km² or 8 ha. (Updated 2017/06/05)

Throughout its range, Drooping Trillium is typically found in hardwood forests on mesic, circumneutral soils. Canadian populations are associated with watercourses, usually on better drained microsites on floodplain terraces or adjacent slopes with sandy loam soils. It may benefit from periodic disturbance caused by flooding and the warmer than average microsites along river valleys. (Updated 2017/06/05)

Drooping Trillium is an herbaceous plant that typically flowers in May and June at Canadian sites. It is a rhizomatous perennial that takes on average 10 years to reach reproductive maturity. Each individual plant has one to several flowering stems. Reproduction is primarily sexual with ants playing a role in short–distance dispersal of seeds. Seeds have double dormancy, requiring two seasons of cold to germinate. Deer may also disperse seeds but can have a negative impact from herbivory. (Updated 2017/06/05)

Drooping Trillium is at the northern limit of its range in Canada and has restricted habitat preferences. The main historic and current threats to Canadian populations are habitat loss and degradation from urban and agricultural development. Trampling from increasing and incompatible recreational trail use threatens the Strathroy population. Invasive species such as Garlic Mustard and herbivory by White–tailed Deer are also threats. (Updated 2017/06/05)