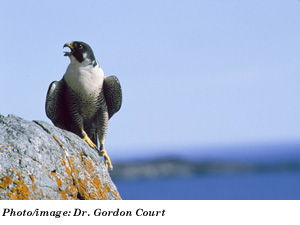 Falcons are birds of prey that are smaller and more streamlined than hawks, with long pointed wings that enable them to fly at great speed. The Peregrine is a crow-sized falcon. A blackish "moustache" (black stripe below the eye) and bluish-grey or slate-coloured upper parts characterize both sexes. The under parts are white to buff with brown bars on the sides and thighs, and spots on the abdomen; the underside of the wings is white with black bars. The young peregrine falcon has a blackish moustache; brownish upper parts; a dark brown tail with buff colored bars and white tips; and buff-colored under parts with blackish-brown streaks. The three subspecies are similar, differing slightly in colouration and size; the Peregrine Falcon tundrias subspecies are smaller, with a paler breast.

The three subspecies have distinct geographic distributions. The Peregrine Falcon tundrius subspecies (also known as the Tundra or Arctic Peregrine), breeds in the tundra regions of Canada, Alaska and Greenland. This subspecies is highly migratory, traveling as far south as Argentine and Chile. It has been found that the farther north a bird breeds, the farther south it migrates.

The habitat requirements of the Peregrine Falcon can be divided into three components: 1) the nest site: nests are usually scrapes made on cliff ledges on steep cliffs, including artificial cliffs such as quarries and buildings; 2) the nesting territory: the area defended around the nest prevents other pairs from nesting within 1 km or more, ensuring adequate food for all nesting pairs and their young; the density of nests tends to be related to food availability; 3) the home range: the extended, non-defended area in which the peregrines hunt for additional food and which can extend to 27 km from the nest; peregrines prefer open habitats such as tundra, savanna, seacoasts and high mountains, but will also hunt over open forest.

Peregrine Falcons begin breeding in their second year. Although the average lifespan is 4 to 5 years, some birds have been known to live much longer. Clutch size varies from 2 to 5 eggs, increasing southwards. The reproductive cycle of the three subspecies is similar, the main difference being in the timing of events: Peregrine Falcon pealei subspecies lay eggs during April, boreal forest peregrines lay in May, and Arctic birds lay in mid-June. Renesting will occur in southern populations if the eggs are destroyed early in the incubation period. Peregrines are excellent hunters that feed almost entirely on birds, usually catching them in flight.

The major cause of decline of Peregrine Falcon populations is the presence of agricultural pesticides, especially organochlorine compounds, in the environment. These compounds are known to cause egg-shell thinning, egg breakage, reduced hatching success, reduced brood-size and reduced breeding. Since Peregrine Falcons are at the top of the food chain, their tissues accumulate a great deal of these substances. The destruction of breeding sites and breeding areas due to the expansion of human activities are factors in local declines of Peregrines. Human intrusion near nest sites can cause breeding interruptions and/or nest abandonment.

The Peregrine Falcon is protected under the Convention on International Trade in Endangered Species of Wild Fauna and Flora (CITES), which restricts the import and export of birds and eggs.