Scientific Name: Centrocercus urophasianus phaios
Other/Previous Names: Sage Grouse (British Columbia population)
Taxonomy Group: Birds
COSEWIC Range: British Columbia
COSEWIC Assessment Date and Status Change: December 2021
COSEWIC Status: Extirpated
COSEWIC Status Criteria:
COSEWIC Reason for Designation: Historically this large grouse had a restricted distribution in Canada, occurring only in British Columbia’s Okanagan Valley, where it was last observed in the 1960s. It persists in small numbers in the United States, including a rare and declining population in Washington State. The species is dependent on sagebrush-dominated landscapes, which have been substantially degraded and reduced in extent in both Canada and the adjacent United States.
COSEWIC History of Status Designation: Has not been reported since the 1960s. Designated Extirpated in April 1997. Status re-examined and confirmed in May 2000, April 2008, and December 2021.
SARA Status: Schedule 1, Extirpated
Date of Listing (yyyy-mm-dd): 2003-06-05 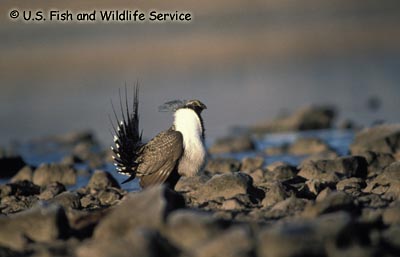 Greater Sage-Grouse (Centrocercus urophasianus) is the largest grouse in North America. It is one of two Centrocercus species; the other is the Gunnison Sage-Grouse, Centrocercus minimus, restricted to the Gunnison Valley of Colorado. Two subspecies of Greater Sage-Grouse are known from Canada: C. u. urophasianus in Alberta and Saskatchewan and C. u. phaios in the south Okanagan Valley of British Columbia. The latter form is extirpated. Preliminary genetic analysis indicates Greater Sage-Grouse north of the Missouri River form a single population which is likely further divided into 3 sub-populations: Sage Creek (western Saskatchewan, Alberta, and northern Blaine County, Montana), Grasslands (Grasslands National Park, Saskatchewan and northern Phillips and Valley Counties, Montana), and South of the Milk River (southern Blaine, Phillips, and Valley Counties). (Updated 2017/05/25)

Greater Sage-Grouse exhibit a near-obligate relationship with sagebrush and are found within the sagebrush range in western North America. Grouse found in Alberta and Saskatchewan are at the northern edge of the species’ range and represent less than 1% of the global population. Based on historical accounts, there has been a 90% reduction in range and substantial declines in the number of breeding locations. (Updated 2017/05/25)

Greater Sage-Grouse inhabit the mixed grassland ecoregion of Alberta and Saskatchewan, which has been reduced significantly. Their distribution is closely associated with that of silver sagebrush. Specific attributes within the sagebrush community are required during breeding, nesting, brood-rearing and over-wintering. Herbaceous cover for nesting and brood-rearing may be limited for Greater Sage-Grouse in Canada. (Updated 2017/05/25)

Greater Sage-Grouse are long-lived and chick survival may be driving population declines. Productivity is associated with local vegetation, age and condition of the breeding female, spring precipitation, anthropogenic disturbances, and spatial distribution and density. Nest initiation rates, clutch sizes, and nesting and breeding success are normal-high compared to rates reported in the species range. This suggests that intrinsic reproductive rates and success are not factors limiting the population. However, chick survival is low and may be the demographically limiting factor. Given their small population in Canada, Greater Sage-Grouse are susceptible to climate and stochastic events. Extended drought may exacerbate the already limited amount of herbaceous cover for nesting and brood-rearing and degrade silver sagebrush habitat. Greater Sage-Grouse are difficult to raise in captivity and are not good candidates for translocation. Currently, however, adequate gene flow exists in Canada. (Updated 2017/05/25)

Current population declines are likely due to an accumulation of causes but loss and degradation of habitat is thought to be the most important limiting factor. This has occurred through cultivation of rangeland for agriculture and overgrazing in the United States of America, expansions in oil and gas exploration and changes in hydrology. The effect of West Nile Virus and loss of genetic variability are not fully understood, but may have serious implications for a small population. (Updated 2017/05/25)