Scientific Name: Ardea herodias fannini
Other/Previous Names: Pacific Great Blue Heron
Taxonomy Group: Birds
COSEWIC Range: British Columbia
COSEWIC Assessment Date and Status Change: April 2008
COSEWIC Status: Special Concern
COSEWIC Status Criteria:
COSEWIC Reason for Designation: In Canada, this subspecies is distributed along the coast of British Columbia with a relatively small population that is concentrated at a few breeding colonies in southern British Columbia. There is evidence of declines in productivity and it is unclear whether the population is stable or declining. Threats from eagle predation, habitat loss and human disturbance are ongoing, particularly in the southern part of the range where concentrations of birds are highest.
COSEWIC History of Status Designation: Designated Special Concern in April 1997 and April 2008.
SARA Status: Schedule 1, Special Concern
Date of Listing (yyyy-mm-dd): 2010-02-23 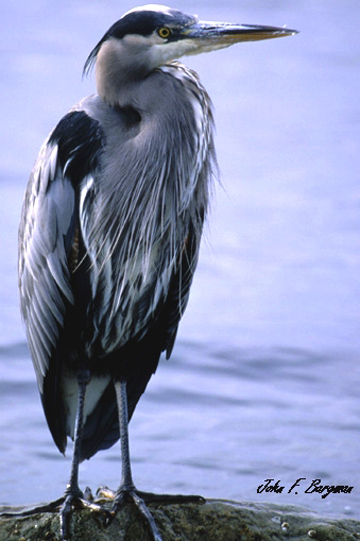 The Great Blue Heron is the largest heron in Canada. Standing over 1 m in height with its neck extended and measuring 97 to 137 cm in length, it is also the largest wading bird in North America. Like all wading birds, the Great Blue Heron has long, stilt-like legs, a long neck and a short tail. Its wings are long and rounded. The Great Blue Heron flies with deep, slow wingbeats, its neck folded in an S-shape and its head pressed between its shoulders. Its long, slender digits are partially webbed. Plumage is mostly a blue-grey colour, and adults have a white crown with a black stripe extending from the yellow eyes to slender black plumes at the back of the head. Its breast is white streaked with black. The Great Blue Heron fannini subspecies is smaller and darker in colour than the Great Blue Heron herodias subspecies. It also differs in its reproductive behaviour and its reproductive physiology; in particular, it has a smaller clutch size.

The Great Blue Heron breeds in most regions of North America south of Alaska, and on the Galapagos Islands. The winter distribution of this species is south of the polar regions in the North to as far south as Panama. The Great Blue Heron fannini subspecies resides year-round on the Pacific Coast, where it is confined to a region extending from Prince William Sound in Alaska to Puget Sound in Washington State. In Canada, the presence of this subspecies is limited to the north and south coasts of British Columbia, and to its large coastal islands, including Vancouver Island and the Queen Charlotte Islands. Most of these herons breed in the Strait of Georgia. This non-migratory species is isolated in part from continental herons by the high mountain ranges to the east. It is difficult to estimate population size for the Great Blue Heron fannini subspecies because colonies are not stable: herons have a tendency to leave the colony following a disturbance. The best available estimates suggest that its population in Canada is 4000 to 5000 nesting adults, nearly half of its global population. Christmas Bird Count data show significant population declines of 19 to 26% over the past three generations of herons, while Coastal Waterbird Surveys show an increase from 1999 to 2004, but these surveys cover only a five-year period. Colony surveys suggest that the reproductive rate for herons has declined considerably since the 1970s. The proportion of nesting pairs that successfully raise at least one fledgling on the coast of British Columbia is currently much lower than in the past. Immigration from United States populations is theoretically high because of the proximity of Puget Sound in Washington State and of the Strait of Georgia, and because of the roughly equal-sized heron populations in the two regions. However, threats to heron populations and habitats in the United States are similar to those in Canada, and perhaps even more severe because of the larger human population living there.

On the south coast of British Columbia, the Great Blue Heron fannini subspecies begins to nest between February and April. At this time, most herons gather in colonies where they court, nest and raise their young. Monogamous couples are then formed for the season. Females typically lay four eggs, and on average, fewer than two chicks reach the fledgling stage and leave the nest. The Great Blue Heron fannini subspecies has smaller clutches than those of other Great Blue Herons, which range in size from one to eight eggs. The male and female both incubate the eggs and feed their young. Less than 25% of juvenile herons survive their first winter. The nests, generally built in trees, consist of large platforms made of large branches. Sometimes, herons simply repair a nest used the previous year. Couples nest alone or in colonies. Herons hunt a wide variety of animals, but their diet consists mainly of small fish during breeding season, and is supplemented with small mammals in winter. In British Columbia, the primary predator of the Great Blue Heron fannini subspecies is the Bald Eagle. The Bald Eagle is responsible for reduced nesting productivity in many colonies.

The main factors threatening heron populations are nesting failure and reduced nesting productivity as a result of eagle predation, human disturbance and destruction of nesting and foraging habitats by residential and industrial development, road construction and logging. The quiet wooded areas in which herons nest, located near foraging areas, are becoming increasingly rare in southern British Columbia. The human population in the area of the Strait of Georgia, in which is concentrated the largest number of herons, is projected to double from 1990 to 2020, which may increase human disturbance in colonies, as well as habitat destruction. Although some herons of the Great Blue Heron fannini subspecies can tolerate human activities near their nests, many are sensitive to human presence. Human activity near heron colonies compounds the threat posed by eagle predation to this subspecies. It has been shown that the number of fledglings raised in Great Blue Heron colonies with frequent disturbances is significantly lower than in colonies with no disturbances. When disturbed, herons leave their nests unguarded, especially early in the nesting season when humans enter colonies on foot or make noise nearby. Unprotected nests leave eggs and chicks more vulnerable to predation by eagles and other birds. The Bald Eagle is the primary predator of the Great Blue Heron fannini subspecies and represents a factor that significantly affects heron populations. Eagle populations on the south coast of British Columbia have been on the rise since the mid-1980s and the number of attacks on Great Blue Heron nests has more than doubled over this time period. Predation and associated disturbance result in significantly higher nest and colony abandonment rates. In addition, predators may have an impact on habitat quality by forcing herons to move to new sites that are even more limited or of lower quality. Finally, chemical contaminants such as polybrominated diphenyl ethers, or PBDEs, are found in increasingly high concentrations in the tissues of herons and could reach toxicologically significant levels. The implications of this finding are currently not fully understood, but the situation is seen as a potential emerging threat in urban areas. There are similar concerns over another emerging class of industrial pollutants: perfluorinated chemicals.