Scientific Name: Plebejus samuelis
Other/Previous Names: Lycaeides melissa samuelis
Taxonomy Group: Arthropods
COSEWIC Range: Ontario
COSEWIC Assessment Date and Status Change: May 2019
COSEWIC Status: Extirpated
COSEWIC Status Criteria:
COSEWIC Reason for Designation: This butterfly occurred within a restricted range in oak savannah and woodland habitats in southern Ontario. Its population decline and degradation of its habitat are well documented. The species has not been seen since 1991 despite ongoing search efforts.
COSEWIC History of Status Designation: Has not been observed since 1991. Designated Extirpated in April 1997. Status re-examined and confirmed in May 2000, April 2010, and May 2019.
SARA Status: Schedule 1, Extirpated
Date of Listing (yyyy-mm-dd): 2003-06-05 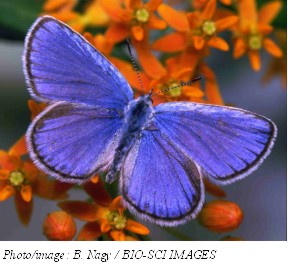 The Karner Blue is a small butterfly with a wingspread of just 22 to 32 mm. The upper side of the male's wing is iridescent light blue, edged with a thin black line that parallels a white fringe on the wing's outer margins. The upper side of the female's wing is purple-blue with a purple-brown tone; a chain of black spots appears on the leading and outer areas of the wings. An inner parallel row of orange crescents embrace these black spots. The bottom side of both sexes is light silver-grey with several white-edged, black spots in the inner areas of both wings.

The Karner Blue is one of five subspecies of the more widespread Melissa Blue. The Karner Blue once occurred from New Hampshire and New York, west across southern Ontario, northern Indiana and Michigan, to southern Wisconsin. It was most commonly found in oak savanna habitats scattered within the deciduous forest region of southern Ontario, and its historic range may have included Toronto, London and Sarnia. The species has declined by up to 90 % since the late 1970s to the early 1980s. By the early 1980s only two of Ontario's six sites remained - Port Franks and St. Williams. The Port Franks site was considered secure, with the population possibly growing in 1984. At that time, the population exceeded 1,000 individuals. The St. Williams site was conversely very small, with about seven individuals, and expected to die out. Then, during extremely dry summers in 1988 and 1989, the Wild Lupine populations died before Karner Blue adults had laid second broods. The Wild Lupine is the Karner Blue larva's only source of food. Since then, there have been no confirmed reports of the butterfly at either site. The situation in the United States is quite similar. The butterfly is extirpated or endangered in all but one state where its status is not known.

The butterfly is restricted to sandy soils, sandy pine barrens and beach dunes. These are areas where the Wild Lupine grows. Sandy soils are the foundation of the St. Williams' dry oak savanna habitat, while beach dune complexes provide required habitat at the Port Franks site. Well-spaced trees with 35 to 60 % canopy and well-developed ground cover characterize the St. Williams' woodlands. Fire suppression is blamed for loss of a lot of suitable habitat, since fire is necessary to prevent overgrowth.

There are four stages to the life cycle of a butterfly: egg, larva, pupa, adult. Adult Karner Blues have two flight periods: the first is from May 25 to June 30 and the second is from July 12 to August 18. It is during second flight that the eggs for the second generation are laid. The second generation is three to four times more numerous than the first generation. This difference is probably due to the greater availability of food when the second group is born. Eggs are laid on Wild Lupine plants. The larvae feed only on Wild Lupine, mainly on the leaves. The larvae may be tended by ants, which reduce parasitic attacks on the larvae in exchange for a sugary substance the larvae produce. Larvae enter an eight-day chrysalis stage at the end of the fifth instar (stage between molts). The adults are sedentary, often moving an average of just a few hundred metres during the course of a day, but they can be active all day long if the temperature is warm. The butterflies are not deterred by cloud or breeze, but very hot weather reduces their activity and they are inactive when it rains. The average lifespan of an adult in the wild is five days.

The distribution and population density of this subspecies appear to have been limited by the extent and health of the Wild Lupine. Wild fires likely maintain the open nature of the lupine's habitat. Fire suppression and extensive planting of pine trees has hastened the shading out of early successional habitat, including Wild Lupine. To survive, Karner Blue and Wild Lupine sites must contain successional variety. The butterfly also requires a variety of flowering plants for nectar. It also depends upon micro-climates different enough to support lupine populations until the second generation of Karner Blues is laid.

Summary of Progress to Date In cooperation with the Karner Blue Recovery Team, the Canadian Wildlife Service and the Ontario Ministry of Natural Resources are preparing a recovery strategy for the Karner Blue and Frosted Elfin in Canada. The recovery goals and objectives are aiming to create enough suitable habitat for the Karner Blue in three geographically distinct areas (Northfolk, Lambton and Northumberland Counties) so that the species can be reintroduced into Canada. By completing recovery actions for the Karner Blue, especially involving the restoration of oak savannah and tallgrass prairie habitat, the Frosted Elfin and Persius Duskywing will benefit, as they depend on the same habitat as well (the two species, however, are only known historically from the Norfolk location). Recovery efforts for the Karner Blue are much more advanced than for the Frosted Elfin and Persius Duskywing, largely due to the significant progress made on recovery of this species in the United States. Summary of Research/Monitoring A research study, led by York University in 2004, assessed the suitability of each of the restored oak savannah areas in Ontario targeted for Karner Blue reintroduction by collecting quantitative field data to determine if they meet a minimum ecological standard for reintroduction. Although none of the sites met all the minimum standards for Karner Blue reintroduction, further restoration and management is possible to improve the habitats so that they are suitable for reintroduction. Specific recommendations, required to achieve minimum standards for reintroduction, were provided in the study for each area. Activities based on these recommendations are ongoing. At Alderville First Nation, a Black oak savannah and tallgrass Prairie project is underway that aims to improve and protect Karner Blue and Persius Duskywing butterfly habitat, and associated rare tallgrass habitats. A volunteer Wild Lupine planting program has been underway for seven years, and the success of these plantings is being assessed through the measurement of Lupine development, density, and survival. The evaluation of the lupine population is necessary to ensure the plants are self-propagating and the site is suitable for supporting viable populations of Lupine. Protocols for transport and release of butterflies have been developed in the U.S. and the Toronto Zoo has been working on a captive rearing protocol for the Karner Blue. In 2006, Pinery Provincial Park completed a study on second brood nectaring plant availability. The results will be used to guide more restoration work to increase diversity of second brood nectaring species. Summary of Recovery Activities There has been a number of oak savanna restoration projects carried out in each of three target areas for reintroduction (Lambton County, Norfolk County, and Northumberland County). These undertakings have provided a great deal of experience and knowledge in the reclamation of sites. Lambton County – Lake Huron shorelineAt Pinery Provincial Park, habitat improvement initiatives have been underway since 1997. The Park has regularly collected and planted Wild Lupine seeds since 1993 to increase regeneration and also to connect this location with the Port Franks location to facilitate dispersal between populations. Seeds from nectar producing flowers, such as Butterfly Milkweed (Asclepias tuberosa) and New Jersey Tea (Ceanothus americanus), have been planted to provide a food source to adult butterflies. Outreach material on the Karner Blue butterfly is on display at the visitor’s centre and park tabloids/newsletters are released regularly to inform the public of recovery activities. The Karner Blue Sanctuary in Port Franks also has undergone habitat restoration since 1992 through the removal of tree plantations and thinning of forests to open up the area and increase the growth of the former oak savannah vegetation. Nectar source plantings have been conducted in the past at this location. Norfolk County – St. Williams The St. Williams Forest is managed as a conservation reserve by the Ontario Ministry of Natural Resources. Its combined diversity of ecological communities (including oak savanna, oak woodland, other tallgrass communities; and sand barrens, forests, wetlands, and streams) supports one of the highest concentrations of species at risk in Ontario and Canada. A goal of the management of this area is to maintain and restore native ecological communities and their associated species. The area has undergone restoration (thinning and controlled burns) to reclaim habitat in locations historically known to support both the Karner Blue and Frosted Elfin. Northumberland County – Rice Lake PlainsA Joint Initiative among the Nature Conservancy of Canada, Ontario Parks, County of Northumberland, Lower Trent Conservation, Ganaraska Region Conservation Authority, the Wetland Habitat Fund, conservation partners, and the local landowners is working together to protect and steward one of Ontario's last remaining sites of tallgrass prairie and black oak savanna and the species that live there. Numerous activities are underway in the area. With assistance from the Habitat Stewardship program, field reclamation measures to improve or create tallgrass and savannah habitat have been undertaken at Alderville First Nation, including restoring original vegetation by planting native prairie seeds, removing encroaching growth, and conducting controlled burns. Wild Lupine plantings have occurred annually since 2002 to increase the population and density for Karner Blue Butterfly habitat. There are currently 32 ha of savanna and tallgrass habitat available, with another 9 ha of old field slated for restoration in the future. In 2007, Alderville First Nation is planning to seek out local residents and inform them of the value of tallgrass habitat and the species at risk it supports. Articles in community newsletters, displays, websites, and audio/visual presentations are keeping the local public aware of activities, volunteer opportunities, workshops, and meetings to support the stewardship for the Karner Blue. Moreover, the Toronto Zoo has produced outreach materials (e.g. The Oak Savannah and Karner Blue Butterfly Wheel) for educational and fundraising purposes. URLs Ontario’s Biodiversity: Species at Risk: Frosted Elfinhttp://www.rom.on.ca/ontario/risk.php?doc_type=fact&lang=&id=56 Butterflies of Canada: Frosted Elfinhttp://www.cbif.gc.ca/spp_pages/butterflies/species/FrostedElfin_e.php Butterflies of Canada: Persius Duskywinghttp://digir.agr.gc.ca/spp_pages/butterflies/species/PersiusDuskywing_e.php Ontario’s Biodiversity: Species at Risk: Karner Bluehttp://www.rom.on.ca/ontario/risk.php?doc_type=fact&lang=&id=57