Scientific Name: Noturus stigmosus
Taxonomy Group: Fishes
COSEWIC Range: Ontario
COSEWIC Assessment Date and Status Change: May 2012
COSEWIC Status: Endangered
COSEWIC Status Criteria: B1ab(iii)+2ab(iii)
COSEWIC Reason for Designation: This species is one of the rarest freshwater fish in Ontario, being found at only four locations in river systems in southwestern Ontario. Substantial and ongoing threats in these rivers include siltation, turbidity, exotic species and toxic compounds, which have all been assessed as high levels of concern. Although there may be some localized improvement in habitat, overall there is an inferred continuing decline in habitat quality and substantial ongoing threats throughout its range.
COSEWIC History of Status Designation: Species considered in April 1993 and placed in the Data Deficient category. Re-examined in April 1998 and designated Special Concern. Status re-examined and designated Endangered in November 2002 and May 2012.
SARA Status: Schedule 1, Endangered
Date of Listing (yyyy-mm-dd): 2005-01-12 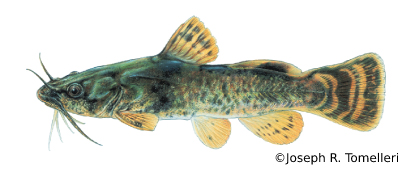 The Northern Madtom belongs to the bullhead catfish family. Members of the genus Noturus all have an adipose fin that is a long, low, ridge-like extension of the tail fin. In the Northern Madtom, the adipose fin appears completely separated from the tail fin by a deep notch. It is a bottom-dwelling fish with a thick body, and grows to a maximum length of 132 mm. It is mottled grey to tan and has three irregular dark saddles on its back.

The Northern Madtom is found in the central United States south of the Great Lakes, and reaches the northern extent of its range in southern Ontario. In Canada, it is known only from Lake St. Clair and the Detroit, Sydenham, and Thames rivers. Observations from the 1990s indicate that sustainable reproducing populations are established in these water bodies, but no population estimates or trends are available.

The Northern Madtom prefers habitats ranging from large creeks to big rivers, with clear to turbid water, and moderate to swift current. The fish occurs on bottoms of sand, gravel, and stones, occasionally with silt, detritus, and accumulated debris. It is sometimes associated with large aquatic plants, and is typically collected at depths of less than 7 m.

Nests are made under large rocks and in anthropogenic (human-produced) debris. Males guard both the eggs and newly hatched fry. Adult fish feed on insects, especially mayflies and caddisflies, and also eat crustaceans and smaller fishes. Spawning and feeding probably occur at night. In Lake St. Clair, pregnant females and recently spawned eggs were observed at the end of July. The nests were set in gentle currents on a sandy bottom surrounded by a thick bed of aquatic plants. Clutch size was estimated to range from 32 to 160 eggs.

The absence of the species from the most strongly polluted sides of the St. Clair and Detroit rivers suggests that the Northern Madtom is sensitive to poor water quality. Competition from exotic fish species may also be having an impact.

The Northern Madtom population in the Detroit River occurs in one of 43 "Areas of Concern." It will therefore benefit from full implementation of a Remedial Action Plan under a co-operative program between the United States and Canada.