Scientific Name: Centrocercus urophasianus urophasianus
Other/Previous Names: Sage Grouse (Prairie population)
Taxonomy Group: Birds
COSEWIC Range: Alberta, Saskatchewan
COSEWIC Assessment Date and Status Change: December 2021
COSEWIC Status: Endangered
COSEWIC Status Criteria: D1
COSEWIC Reason for Designation: In Canada, this large grouse is restricted to sagebrush-dominated landscapes in southern Alberta and Saskatchewan. The loss, fragmentation and degradation of this habitat as a result of oil and gas exploration, overgrazing by livestock, and conversion to crops has resulted in a substantial population decline over the past several decades. Trend estimates over the past three generations are imprecise, but monitoring efforts indicate further abandonment of some historically occupied breeding sites. Despite recovery efforts, the Canadian population remains small, with a current estimate of only 120 to 220 mature individuals. There may be limited immigration from Montana, but the numbers are likely insufficient to substantially increase the Canadian population.
COSEWIC History of Status Designation: Given conditional designation of Threatened in April 1997. Status re-examined and designated Endangered in April 1998 based on a revised status report. Status re-examined and confirmed in May 2000, April 2008, and December 2021.
SARA Status: Schedule 1, Endangered
Date of Listing (yyyy-mm-dd): 2003-06-05 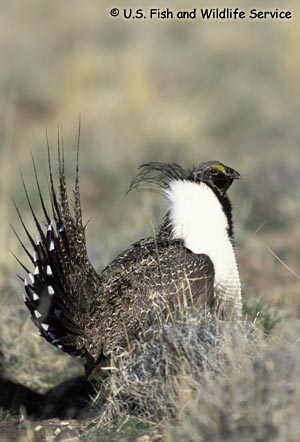 Greater Sage-Grouse is a chicken-like bird, with brownish-grey upperparts and a blackish belly. The undersides of the wings are whitish. Its long black-and-white tail has distinctive tips. It is the largest grouse in North America. Adult males have a white band on a black throat and a large ruff of pointed white feathers concealing the yellowish air sacs that inflate during courtship displays. Other male characteristics include fleshy yellow combs above the eyes and long, hairlike feathers arising from the nape. Both sexes have a diagnostic black patch on the belly (it is larger on the male). The female has more cryptic plumage and an inconspicuous comb above the eye and is smaller than the male, which can reach 75 cm in length.

As its name suggests, Greater Sage-Grouse is found in western North America in areas where sagebrush grows. It is currently found in southeastern Alberta, southwestern Saskatchewan and 11 states in the western United States. Before Greater Sage-Grouse disappeared from British Columbia, there were populations in the Okanagan and Similkameen valleys. Based on historical accounts, there has been a 90% reduction in range and a substantial decrease in the number of breeding locations. Recent estimates show that the number of individuals in the two provinces fell from 777 in 1996 to 450 in 2006, a 42% decrease. Between 1988 and 2006, the total Canadian population decreased by 88%. Similar results have been obtained for the number of leks (the male courtship display sites), which decreased from 30 in 1996 to 15 in 2006, a drop of 50%.

In Canada, the urophasianus subspecies of Greater Sage-Grouse is found in the mixed grassland ecoregion, a warm, dry region where the native vegetation has now been significantly reduced. The presence of Greater Sage-Grouse is associated year round with sagebrush habitat (specifically silver sagebrush in Canada). Specific attributes within the sagebrush community are required during breeding, nesting, and brood-rearing and in the winter. Leks, where males perform courtship displays to attract mates, are generally clear areas with little sagebrush or other plants. However, the presence of vegetation to conceal the nest is crucial. In Alberta, most nests are located under silver sagebrush plants. Greater Sage-Grouse depends on sagebrush for food year round. Sagebrush constitutes over 47 to 60% of the adult diet in the summer and 100% in the winter.

In the spring, male Greater Sage-Grouse congregate on leks to attract mates. They perform spectacular courtship displays: as they strut, they inflate and deflate their throat sacs with a popping sound, throwing their heads back, spreading their wings and fanning out their tails. In Alberta, females reach the leks around April 5, shortly after the males. Exhibiting fidelity to nesting sites, females disperse after mating and rear their brood alone. The average clutch size in Alberta is eight eggs; incubation lasts 25 to 29 days. In Canada, eggs hatch during the first two weeks of June. Sagebrush is the main component of the adult diet, but adults also eat other plants and insects. Greater Sage-Grouse is long-lived, but the low survival rate of chicks could lead to population declines. Common nest predators in Canada include the American badger, raccoon, striped skunk and red fox.

Habitat loss and degradation are the most significant threats to the urophasianus subspecies of Greater Sage-Grouse in Canada. The transformation of the habitat of Greater Sage-Grouse into farmland played a major role in its decline. Heavy grazing, particularly over the long term, has detrimental effects on the species. Furthermore, large areas of sagebrush grassland have been converted to the exotic crested wheatgrass for cattle forage. These introduced stands have limited potential in terms of winter forage and shrub and forb cover. Oil and gas development near leks represents another threat to the urophasianus subspecies of Greater Sage-Grouse in Alberta. During the oil exploration boom in the 1980s, the number of males displaying on leks in southern Alberta decreased by approximately 50%. Oil and gas wells and associated pipelines affect 28% of sagebrush habitats across the species’ range. Industrial development has also fragmented sagebrush habitat through the addition of buildings, highways, trails, fences and electrical poles. In addition, a number of these structures provide raptors with prime perching sites. Predation may be a factor limiting nest success. Habitat alteration may result in a loss of concealment cover for grouse or a change in the predator community. Drainage impediments such as dams, dugouts and reservoirs increased fourfold in southeastern Alberta between 1951 and 2001, altering hydrological regimes and degrading silver sagebrush communities. More than 80% of the current range of the urophasianus subspecies of Greater Sage-Grouse in Alberta has been altered by such impediments. Because of the small size of the population in Canada, the urophasianus subspecies of Greater Sage-Grouse is highly vulnerable to climatic and chance events. Extended droughts in recent years may have reduced the already limited amount of sagebrush that the grouse need for nesting and brood-rearing. Mortality due to West Nile virus could devastate the small Canadian populations.

The Greater Sage-Grouse urophasianus subspecies is protected under the federal Species at Risk Act (SARA). More information about SARA, including how it protects individual species, is available in the Species at Risk Act: A Guide.

The urophasianus subspecies of Greater Sage-Grouse is found in Grasslands National Park of Canada, where it is protected under the Canada National Parks Act. The urophasianus subspecies is also protected under the Saskatchewan Wildlife Act, 1998 and the Alberta Wildlife Act, which prohibit harming, destroying or collecting adults or eggs or destroying occupied nesting sites. In addition, the Saskatchewan Wildlife Habitat Protection Act prohibits cultivating native grasslands and selling public lands that contain Greater Sage-Grouse habitat.

Summary of Progress to Date The Greater Sage-grouse recovery team aims to reverse the declining trend in numbers of Sage-grouse and active Sage-grouse leks in Saskatchewan and Alberta. The recovery teams aim to conserve a population of at least 365 males in Alberta and 500 males in Saskatchewan, with 16 or more leks in Alberta and 30 or more leks in Saskatchewan. However, the population has remained less than a third of the targeted population size since 1994. With such small population sizes, the species is increasingly vulnerable to threats such as West Nile virus, and managing for high quality habitat to increase population productivity is more urgent than ever. Both the Alberta and Saskatchewan governments participate in the Western Association of Fish and Wildlife Agencies (WAFWA) for which 11 states and 2 provinces have signed an accord for Sage-grouse management across the range in North America. In 2004, WAFWA published a comprehensive report entitled Conservation Assessment of Greater Sage-grouse and Sagebrush Habitats (available at www.sagebrushsea.org/WAFWA_page.htm) Summary of Research/Monitoring Activities Changes in Sage-grouse populations are detected by monitoring males on leks, where they display to attract females for breeding. In Alberta, Sage-grouse have been monitored since 1968. Researchers have established that Sage-grouse require different habitat features at different stages in their lives; males display on open, heavily-grazed areas, pairs nest in thicker sagebrush with grass cover, and chicks are raised in forb-rich areas. Greater Sage-grouse chicks have a very high mortality rate, and it is estimated that chick survival would need to at least double for the population to stop declining. A study of habitat selection in Alberta revealed that Sage-grouse require sagebrush or other shrubs to nest under, along with herbaceous understory vegetation (including tall grasses) to conceal the nest from predators and provide food for chicks when they hatch. The results of this study suggest that a small increase in sagebrush cover on the landscape (to about 15%), along with increased forb cover, may be sufficient to increase chick survival and stabilize Alberta’s Greater Sage-grouse population. Several landscape management options, including alternative grazing scenarios and active management of sagebrush, should be tested. Habitat management will require providing a mixture of landscape types. Canada is the northern extent of the Sage-grouse range, and the Canadian population may have become separated from the core population in Montana, possibily resulting in genetic inbreeding. Preliminary research results suggest that both Alberta and Saskatchewan have moderate levels of genetic diversity and that there may be limited gene flow between Canada and Montana. However, genetic diversity in Alberta Sage-grouse decreased between 1998 and 2004. Furthermore, developmental problems found in embryos collected from unhatched eggs in Alberta appear to be genetic in origin. Sage-grouse populations in Canada might be extremely vulnerable to disease, including West Nile virus. Therefore, researchers examined populations that had their first exposure to West Nile virus in 2003. These populations had a 25 per cent decrease in late summer survival of females, and the virus was confirmed to have killed 18 birds. Furthermore, grouse tested after the outbreak did not have antibodies, indicating that they did not develop resistance to West Nile virus. Researchers also found that larger, healthier populations in higher quality habitat (in the United States) were less vulnerable to West Nile virus. Sage-grouse habitat has been mapped in southeast Alberta using aerial photography of the vegetation and landscape as well as locations data from radio-tagged grouse. Summary of Recovery Activities Since 2000, all known Sage-grouse lek sites in Alberta have received protection, including land use guidelines that ensure that nearby activities do not disturb leks. Additionally, Alberta legislation was amended to restrict bird dog training activities within the range of the Sage-grouse, in order to reduce mortality. The majority of Sage-grouse habitat is on Crown land used for cattle grazing. Therefore, it is critical that ranchers adopt grazing methods that protect sagebrush habitats. Although the ecology of Silver Sagebrush and the effects of grazing management require further study, the current state of knowledge and preliminary definitions of best grazing management practices for Sage-grouse are provided in Beneficial Grazing Management Practices for Sage Grouse and Ecology of Silver Sage in southeastern Alberta (www3.gov.ab.ca/srd/land/pdf/Sage_Grouse_and_Grazing3.pdf). URLshttp://www.sagebrushsea.org/WAFWA_page.htmhttp://www3.gov.ab.ca/srd/land/pdf/Sage_Grouse_and_Grazing3.pdf