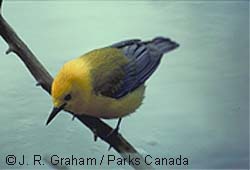 The Prothonotary Warbler is a small bird about 14 cm long. It is one of North America’s most dazzling songbirds. The plumage of males and females is similar, but the males are more brightly coloured. Both males and females have golden yellow heads and breasts, olive green backs, and blue-grey wings and tails. White tail spots are quite prominent. This species is easily confused with the yellow warbler and the blue-winged warbler. The Prothonotary Warbler can be distinguished from the former by its dark wings and white-spotted tail and from the latter by its lack of white wing bars or black eye line.

This species is very rare in Canada, but is actively monitored by a combination of amateurs and professionals. Many occupied sites are prone to blinking on and off. This level of annual fluctuation makes it difficult to ascertain whether there has been a true change in occupied range, but such a change seems unlikely. Fewer than 10 locations are occupied in Canada in any given year (e.g., no more than 8 in 2015). Numbers have remained stable or declined slightly in Canada since the previous status report, from 28- 34 mature individuals (COSEWIC 2007) to 28 in 2015. As such, the population trend has changed from the steep decline reported in the previous status report. See Appendix A for details. The North American population estimate has been adjusted slightly since the last status report. Based on new analysis techniques, the continental population is now estimated at about 1.6 million mature individuals (Blancher et al. 2012), versus an estimated 1.8 million birds in the previous COSEWIC report. However, this is mostly just a change in the manner in which estimates are derived. Based on the Breeding Bird Survey (Sauer et al. 2014), the long-term North American trend was -1.1% per year from 1966-2013 (95% CI = -1.6 to -0.7). The short-term 10- year trend was -0.5% per year from 2003 to 2013 (95% CI = -1.7 to 0.7), which is equivalent to a decline of no more than 17% over the decade. Figure 1 depicts the North American population trend. In Canada, there has been a major and ongoing deterioration in the quality and extent of breeding habitat in the last decade caused by invasive species, notably European Common Reed (Phragmites australis ssp. australis) and Emerald Ash Borer (Agrilus planipennis). [Updated 2018-02-19]

In Canada, this species breeds only in deciduous swamp forests or riparian floodplain forests. The forests it occupies are typically dominated by silver maple, ash and yellow birch. The species nests in naturally formed tree cavities or cavities excavated by other species, mainly downy woodpeckers and chickadees. It favours small, shallow holes situated at low heights in dead or dying trees, in which it builds a nest lined with moss. Nests are typically situated over standing or slow-moving water. Artificial nest boxes are also readily accepted and perhaps even preferred. Males often build one or more incomplete “dummy” nests. Females usually select one of these to complete, but they may also build an entirely new nest on their own. In any case, several suitable cavities appear to be required in each territory to accommodate all of these nests. The key wintering habitat of the Prothonotary Warbler is the coastal mangrove forest that grows in the tidal zones of Central America and northern South America. The Prothonotary Warbler also winters in swamps and wet woodlands, mainly below 1300 m elevation.

This small nocturnal migrant arrives in southern Ontario in early May and departs for its wintering habitat in September. Prothonotary Warblers, particularly after-second-year males, exhibit strong fidelity to breeding sites. These birds are highly territorial during the breeding season. In Canada, an average of just over one-third of all territorial males remain unmated over the course of the breeding season. An apparent shortage of females in the Canadian population limits reproductive potential. In Canada, the species typically produces only one brood per year. The interior of the nest, which is built by both parents, is lined with moss. From late May to early July, the female typically lays four to six eggs and she incubates them alone. Both parents feed the young, which remain in the nest for 9 to 11 days. Nestling survival is highly variable and depends largely on nest predation and parasitism rates, particularly parasitism by the brown-headed cowbird, which may lay its own eggs in the nest. The average brown-headed cowbird parasitism rate in Ontario is 27%, which seems exceptionally high for a cavity-nesting species. When the house wren is present in high densities, it is a serious competitor, destroying the eggs and young of the Prothonotary Warbler and usurping its nests. Losses of Prothonotary Warbler nestlings and eggs are also attributed to foxsnakes and to certain mammals, mainly raccoons and southern flying squirrels. The Prothonotary Warbler is an insectivore, feeding mostly on caterpillars, flies, midges and spiders. Like all small birds, it has a short average lifespan, about 2.5 years.

The severity of threats imposed by invasive insects (especially Emerald Ash Borer) and invasive plants (especially European Common Reed) on the quality of habitat on the Canadian breeding grounds has increased dramatically since the last assessment. In addition, forest harvest has also been shown to negatively affect Prothonotary Warblers (e.g., Heltzel and Leberg 2010), and there has been an ongoing loss of wetlands in the US breeding range (e.g., Stedman and Dahl 2008). [Updated 2018-02-19]

Summary of Progress to Date The Prothonotary Warbler recovery team has been working under the guidance of a recovery plan since 2001. Wetland conservation and restoration initiatives have benefited Prothonotary Warblers as well as many other species at risk. However, forest swamp habitats continue to be eroded and conservation of Prothonotary Warbler breeding habitat remains as urgent as ever. Furthermore, pressure on wintering habitat in Central America is growing, and the recovery team is studying and promoting the bird’s conservation needs outside Canada. Summary of Research/Monitoring Activities Recovery initiatives for Prothonotary Warbler take an adaptive management approach; the effectiveness of techniques is closely monitored so that they can be refined and improved. For example, research indicates that nest boxes can successfully reduce cowbird parasitism and mammalian predation of Prothonotary Warbler nests, thereby increasing production of young. However, House Wrens also use nest boxes in some locations, increasing competition for nest sites. The recovery team continues to experiment with nest box modifications in an attempt to dissuade wren occupancy. Annual population monitoring showed a population increase in the initial years of the recovery program, followed by a recent decline. The decline has been attributed to a series of drought years in combination with a storm event at one site that resulted in a substantial loss in canopy cover. House Wren competition and “vandalism” also appears to have increased at some sites. A bird-banding program on Prothonotary Warbler breeding grounds suggests the population is heavily skewed towards older birds and that about 23% of the warblers are unmated males. This suggests that production and/or survival of young is low. Researchers will investigate why such a high proportion of the population is not mating. The banding program has also shown that, although the birds return to the same breeding site each year, there is genetic interchange between subpopulations; this finding indicates that isolation between subpopulations is not a threat at this point. Research has shown that the Canadian population depends on a low level of immigration of birds from the U.S. “source” population; therefore, the recovery team has begun to initiate a dialogue with colleagues in the U.S. states adjacent to the Great Lakes. In 2005, the recovery team will assess the level of threat that invasive plants (particularly Phragmites) and exotic insect pests (particularly Emerald Ash Borer) present to long-term recovery efforts in Canada. Then, appropriate management alternatives will be presented to land managers. Researchers are also banding and studying wintering populations in five Costa Rican mangrove forests. This research has shown that Prothonotaries typically return to the same winter site between years and prefer young mangrove forests, using - to a lesser extent - adjacent habitats (including dry coastal forest). The banded population in Costa Rica is heavily dominated by males, suggesting that the sexes are segregated (possibly according to habitat) on the wintering grounds and may face different threats. Summary of Recovery Activities Since 1997, nearly 300 nest boxes have been erected at important breeding sites, as well as several other sites that support suitable habitat. Nest boxes are monitored in order to track annual productivity. Since 2003, the recovery team has worked with the Ontario Wetland Habitat Fund to provide landowner workshops, tours and demonstrations on habitat restoration strategies that benefit the Prothonotary Warbler and other species at risk. Techniques have been developed and tested to restore floodplain forests and to restore and/or create wetlands by altering drainage ditches, excavating, installing water control devices (as appropriate), and planting native trees. Novel restoration tools have been applied in several habitat restoration projects. In addition, the recovery team provides outreach materials to landowners and land managers in both Canada and the U.S. through both a brochure and web page. Local conservation awareness programs are also part of the work being undertaken in Costa Rica.