Scientific Name: Oreoscoptes montanus
Taxonomy Group: Birds
COSEWIC Range: British Columbia, Alberta, Saskatchewan
COSEWIC Assessment Date and Status Change: December 2021
COSEWIC Status: Endangered
COSEWIC Status Criteria: B1ab(iii)+2ab(iii); D1
COSEWIC Reason for Designation: This songbird is restricted to small areas of southern British Columbia, Alberta, and Saskatchewan, where it is closely associated with remnant sagebrush grasslands. Its distribution and abundance in Canada appear to have been stable over the past decade, but the population remains very small, with an estimated total of 7 to 36 mature individuals. Immigration from small and declining subpopulations in Washington and Montana is likely insufficient to increase the Canadian population. Loss of sagebrush-dominated habitat to residential development, agricultural development, and fire is believed to have resulted in population declines. Climate change presents a growing concern.
COSEWIC History of Status Designation: Designated Endangered in April 1992. Status re-examined and confirmed in November 2000, November 2010, and December 2021.
SARA Status: Schedule 1, Endangered
Date of Listing (yyyy-mm-dd): 2003-06-05 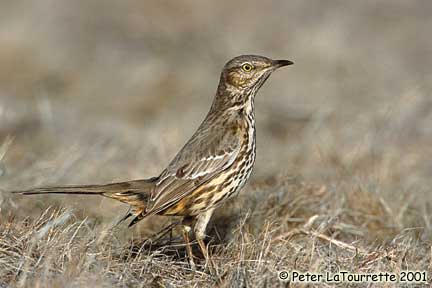 The Sage Thrasher is the only member of the genus Oreoscoptes, and is likely more closely related to the mockingbirds in the genus Mimus than to other thrashers. It is smaller than an American Robin, with a relatively short bill and tail compared to other thrashers. Both sexes show drab greyish-brown above with grey-brown stripes below; the face appears streaked with a whitish supercilium and black streaks on the sides of the throat. The song is a long, musical series of warbling notes. No subspecies are recognized. The Sage Thrasher is one of a small suite of bird species dependent on sagebrush habitats for their existence. (Updated 2017/06/14)

Sage Thrashers breed in shrub-steppe environments dominated by sagebrush. While the size of the shrubs is not important for foraging, large sagebrush (ca. 1 m high) is preferred for nesting. Some habitat has been lost in Canada over the past few decades, but the major loss has been in the United States where more than half of the sagebrush ecosystem has been converted to agriculture. (Updated 2017/06/14)

Sage Thrashers return to Canada in spring and early summer, building bulky nests of sticks in large sagebrush. They lay four or five eggs in the nest, and raise two broods in one season, at least in the central part of the breeding range. In spring and summer they feed largely on insects, especially grasshoppers and beetles, switching to a mixed diet of berries and insects in late summer and early fall. (Updated 2017/06/14)

All threats relate to habitat quality and quantity. There are imminent threats to all habitat on private lands and Indian Reserves in the south Okanagan and Similkameen valleys; sagebrush habitats on these lands are likely to be converted to intensive agriculture (mostly vineyards), housing, and golf courses. Overgrazing has been a problem in the past, because it reduces the size of sagebrush and promotes the establishment of annual grasses, particularly Cheatgrass, which reduces habitat suitability for Sage Thrashers. About a third of the historic habitat has been developed. (Updated 2017/06/14)

Summary of Progress to Date The Sage Thrasher recovery team aims to ensure sufficient habitat to support three breeding populations in British Columbia and one population each in Alberta and Saskatchewan. Habitat may receive protection through conservation partnerships, local stewardship initiatives or designation of new protected areas. In many cases habitat will require some restoration, which may include adjusting grazing regimes and intensities, removing encroaching trees or exotic plants, or replanting Sagebrush. Summary of Research/Monitoring Activities Sage Thrasher habitat requirements are well understood and research is now focused on managing habitat to meet those requirements, while also providing ranching and other economic opportunities. One major project is evaluating the changes in vegetation on several pastures that have had different livestock grazing regimes since 2000. This project will help to clarify the effects of alternative livestock grazing regimes on Sage Thrasher habitat - in particular Sagebrush, a key habitat attribute. In a complementary study, plant communities will be surveyed in 2005 at several sites that have had livestock excluded from them since the 1950s. Until recently, recovery planning had not taken place for Sage Thrashers in Alberta and Saskatchewan, because it was not clear that viable breeding populations existed in these provinces. In 2003 and 2004, potential Sage Thrasher breeding habitat was surveyed and breeding birds were located in southeast Alberta and southwest Saskatchewan. Recovery planning is now underway for these populations. Summary of Recovery Activities In 1999, 1,881 ha of ecologically valuable habitat in B.C.’s southern interior was protected through a joint effort of land trusts. Sage Thrashers are one of several species at risk found on this property, called Long’s Ranch. In 2001, three historical Sage Thrasher breeding areas received habitat protection with the establishment of the South Okanagan and White Lake Grasslands Protected Areas (9,630 ha). The majority of suitable Sage Thrasher habitat occurs on private and Indian Reserve Lands; therefore, the recovery team emphasizes the importance of coordinating recovery initiatives with Fist Nations and private landowners. This process has begun with an outreach program, including a phone number for people to report sightings of this rare bird.