Scientific Name: Eumetopias jubatus
Taxonomy Group: Mammals
COSEWIC Range: British Columbia, Pacific Ocean
COSEWIC Assessment Date and Status Change: November 2013
COSEWIC Status: Special Concern
COSEWIC Status Criteria:
COSEWIC Reason for Designation: This species is restricted to only five breeding locations (consisting of 7 rookeries) in British Columbia that occupy less than 10 km², with approximately 70% of births occurring at a single location (Scott Islands). The population is increasing, but is sensitive to human disturbance while on land and is vulnerable to catastrophic events such as major oil spills due to its highly concentrated breeding aggregations. The species is near to qualifying for Threatened, but has recovered from historical culling and deliberate persecution.
COSEWIC History of Status Designation: Designated Not at Risk in April 1987. Status re-examined and designated Special Concern in November 2003 and November 2013.
SARA Status: Schedule 1, Special Concern
Date of Listing (yyyy-mm-dd): 2005-07-14 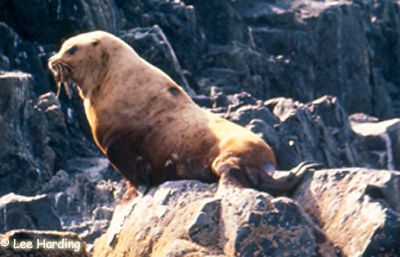 The Steller Sea Lion is the biggest sea lion. Sea lions are often confused with seals, from which they can be distinguished, among other ways, by the presence of external ear flaps. The males of this species are noticeably larger than the females: adult females are 2.1 to 2.4 m long and weigh 200 to 300 kg, while adult males reach a length of 2.7 to 3.1 m and a weight of 400 to 800 kg, the biggest of them weighing nearly a tonne. Mature males develop a light “mane” of coarse hair on their massive muscular necks and chests, from which they derive the name “sea lion”. Pups weigh 16 to 23 kg at birth, the young males generally being heavier than the females. Pups have a shiny, blackish-brown pelt. Coloration of dry juveniles and adults is pale yellow to light tan, darkening on their underside and near their flippers: wet individuals are greyish white.

The Steller Sea Lion mainly lives in the coastal waters of the North Pacific. Little is known of its aquatic lifestyle. In general, most Steller Sea Lions seem to feed on the continental shelf and along its edge. In summer, these animals generally are seen within 60 km of the coasts, in water less than 400 m deep, but they sometimes venture up to 200 km offshore. The Steller Sea Lion is not considered a migratory species, but individuals may disperse up to a considerable distance from the breeding sites. The animals regularly haul out year round and tend to form compact groups with practically no space between individuals. The terrestrial sites frequented by sea lions are divided into three categories: 1) rookeries, which consist of isolated rocks where the animals gather from May to June to give birth, mate, and nurse their pups away from land predators such as wolves and bears; 2) year-round haulout sites, accessible sites generally occupied year round; 3) winter haulout sites, occupied irregularly outside the breeding season.

At sea, Steller Sea Lions are found individually or in groups of a few animals. During the mating season, they form dense colonies on solid land where the calls of the adults and the bleating of the newborn pups provide a constant din. The most powerful males breed with several females. Between the end of May and the beginning of July, the females return to their native rookery to give birth to a single pup, which they generally nurse for nearly a year, although nursing sometimes lasts up to three years. The mothers stay on land with the pups for about one out of two days, each stay on land being followed by a day at sea to feed. The newborns are precocious: they are capable of crawling from birth and learn how to swim at around four weeks of age. One month after their birth, the mothers begin to move their pups to the neighbouring haulout sites, thus joining the non-breeding males and young females. Although it is fairly difficult to estimate, it seems that the mortality rate for pups is fairly high. The lifespan is about 14 years for males and 22 years for females. In British Columbia, the Steller Sea Lion eats mainly schooling fish, such as herring, hake, sandlance, salmon and sardines. Sometimes deepwater wish, such as rockfish, flounder and skate, as well as squid and octopus, make up a substantial part of the Steller Sea Lion’s diet.

The threats to the Steller Sea Lion can be classified in two main categories. The first category covers human-induced factors such as hunting and killing. For most of the 20th century, Steller Sea Lions were killed as part of programs to control predators of fish raised in British Columbia fish farms. Other human-induced limiting factors include accidental entanglement in fishing gear or debris; catastrophic accidents such as oil spills, environmental contaminants like heavy metals which are harmful to health; and finally, the relocation of sea lion populations away from their critical habitats, or the degradation of these habitats. The species is also subject to a second category of threats, natural this time, which include occasional decreases in the number of prey available, predation by killer whales and disease.

Management of marine mammals in Canadian waters is the Federal Government’s responsibility. Commercial hunting of all marine mammals, including the Steller Sea Lion, is prohibited in the Pacific Region. After having suffered from many years of killing, Steller Sea Lions have been protected since 1970 by various regulations of the Fisheries Act applied by Fisheries and Oceans Canada. Some animals however, have been killed under special permits. The Oceans Act, which came into force in 1996, protects the habitats of marine mammals. Certain breeding grounds in British Columbia also benefit from additional protection: the Cape St. James rookery is protected under the Canada National Parks Act and the Scott Islands rookeries are part of a provincial ecological reserve.

Summary of Progress to Date Since 1970, Fisheries and Oceans Canada have prohibited commercial hunting of the Steller Sea Lion under the Federal Fisheries Act. The development of a management plan will assist the recovery of the sea lion. Summary of Research/Monitoring The Cetus Research and Conservation Society maintain a database of sightings reported by volunteer observers. This information is used to monitor trends in whale watching activity and provide feedback for commercial eco-tour operators. Summary of Recovery Activities Straightwatch provides education to Vancouver Island residents and visitors to increase their awareness of local marine species at risk. The Straightwatch stewardship vessel enforces marine mammal viewing guidelines while patrolling waters for any potentially harmful activities. The Cetus Research and Conservation Society are conducting a beach clean up campaign including a presentation on marine debris and environmental contaminants which will help contribute to the recovery of the Steller Sea Lion. URLs Department of Fishers and Oceanswww.dfo-mpo.gc.ca/species-especes/species/species_stellersealion_e.asp