Scientific Name: Strix occidentalis caurina
Other/Previous Names: Northern Spotted Owl,Spotted Owl,Strix occidentalis
Taxonomy Group: Birds
COSEWIC Range: British Columbia
COSEWIC Assessment Date and Status Change: April 2008
COSEWIC Status: Endangered
COSEWIC Status Criteria: A2ac; B2ab(i,ii,iii,iv,v); C1+2a(i); D1; E
COSEWIC Reason for Designation: This owl requires old-growth forests for its survival and has suffered a catastrophic population decline over the past 50 years as habitat is lost and fragmented. With the severely depressed population, an additional threat is the recent arrival of the closely related Barred Owl as a breeding bird in B.C.; this species competes with and hybridizes with the present species. Its historical population of about 500 adult owls in Canada has been reduced to 19, and only 10 of these are in breeding pairs.  All adults are old and near the end of their breeding age and there is no recruitment of young owls into the population. If current trends are not reversed, extirpation will likely occur within the next decade.
COSEWIC History of Status Designation: Designated Endangered in April 1986. Status re-examined and confirmed in April 1999, May 2000, and April 2008.
SARA Status: Schedule 1, Endangered
Date of Listing (yyyy-mm-dd): 2003-06-05 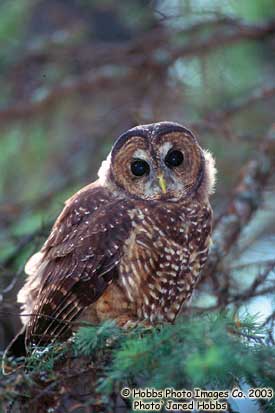 The caurina subspecies of the Spotted Owl is a medium-sized owl. It measures 45 cm in length and has a wingspan of about 90 cm. The plumage is dark overall; the dark brown feathers are speckled with small, roundish pale spots over most of the body and white horizontal bars on the tail. The Spotted Owl has a round head with no ear tufts. The large, dark brown eyes are set in a light brown facial disk (a ring of feathers surrounding the face). After five months, juvenile owls moult their downy feathers and begin to resemble adults. Females are slightly larger than males but have similar plumage.

The caurina subspecies of the Spotted Owl typically begins breeding at two or three years of age. Spotted Owls begin roosting in pairs near the nest in late winter and early spring, with mating generally occurring two to three weeks before nesting. Spotted Owls typically stay with the same partner their entire life and the caurina subspecies of the Spotted Owl does not migrate. Spotted Owls do not breed every year; the same nest is reused each year. Females lay one or two eggs, which they incubate alone, and then brood the chicks while the males provide food for the whole family. In British Columbia, juveniles fledge between June 9 and 26. They remain near the nest through August and late September before dispersing. Juvenile mortality during dispersal is very high. With its acute eyesight, acute hearing and feathers modified for silent flight, the Spotted Owl is well adapted to nocturnal predation. In British Columbia, the northern flying squirrel, the bushy-tailed wood rat and the deer mouse are the preferred prey. The caurina subspecies of the Spotted Owl is long-lived; some individuals in the wild are more than 17 years old.

The caurina subspecies of the Spotted Owl is protected under the British Columbia Wildlife Act, which prohibits harming birds, their nests or their eggs. The habitat can also be protected through the Identified Wildlife Management Strategy under the Forest and Range Practices Act and as part of Old Growth Management Areas. Most of the active sites are in provincial parks or other protected areas and are therefore protected.

The Spotted Owl is listed in Appendix II of the Convention on International Trade in Endangered Species of Wild Fauna and Flora (CITES), which regulates international trade in species that are or may become threatened by commercial trade.

Summary of Progress to Date The Northern Spotted Owl was designated as endangered by COSEWIC in 1986 and was red-listed by the BC Conservation Data Centre in 1989. The province adopted a Spotted Owl Management Plan in 1997 that set aside 363,000 hectares to be managed for Spotted Owls. The Spotted Owl Management Plan covers two of the three forest districts in the range of the Spotted Owl in BC (Squamish and Chilliwack). In response to the 2002 population estimate, two major forestry companies (Interfor and Canfor) voluntarily deferred harvesting in Spotted Owl habitat in these districts until new management guidelines had been developed. In the third district (Merritt) the main logging company working in Spotted Owl habitat (Ainsworth) has agreed to protect Spotted Owl habitat to the standards of the Spotted Owl Management Plan. A Spotted Owl Recovery Team was established in 2002. It has drafted a Recovery Strategy and is working on related Recovery Action Plans with a major effort being put into a habitat/population model to help understand the relationship between the biological and habitat dimensions of recovery. Completion of the Recovery Strategy and Action Plans will enable the BC government to re-evaluate the Spotted Owl Management Plan in the context of new science and analysis and in accordance with current forest and wildlife management legislation. As part of this process, the provincial government is undertaking a parallel analysis of the socio-economic costs and benefits associated with Spotted Owl recovery in BC. Summary of Research/Monitoring Activities Between 1990 and 2002, Spotted Owls were monitored annually in British Columbia, providing population estimates and increasing the understanding of the owl’s habitat requirements. In 1991, the provincial population was estimated at less than 100 pairs. By 2001, the estimate had declined to fewer than 50 breeding pairs and owl numbers were declining at a greater rate than the management plan predicted (average annual decline of 7%). In 2002, this estimate was revised to 33 pairs and a 10% annual decline rate. Further analysis of the survey data has shown that the upper elevation limit of suitable old-growth forest habitat used by breeding Spotted Owls in BC is lower than previously thought. Recent surveys have focused on confirming owl activity at previously used sites and locating new sites in areas with highly suitable habitat. The Spotted Owl Recovery Team is currently working on a habitat/population model that is assisting to identify and map suitable habitat. In January 2004, a two-day Northern Spotted Owl modeling workshop provided a forum for collaboration by scientists, stakeholders and decision makers. The proceedings of this workshop are available on-line (www.forrex.org/publications/forrexseries/fs14.pdf). A follow-up meeting occurred in March 2005. Summary of Recovery Activities The Spotted Owl Management Plan of 1997 was designed to mitigate the impacts of logging by identifying 3200 ha management areas around known and potential Spotted Owl territories. The objective was to maintain approximately 67% of each territory as suitable habitat. The 67% target would be achieved by a variety of means, including retention of some old-growth forests, logging in younger forests and enhancement of potential Spotted Owl habitat through silvicultural practices such as thinning. As a result of the plan, harvest levels within identified territories have been reduced to almost negligible levels. However, reduction of harvesting within identified territories has resulted in increased harvesting in adjacent areas. Fragmentation of habitat, which increases the owls’ risk of predation while traveling between suitable habitat patches continues to be a major challenge to recovery. An additional major threat which is only just beginning to be better understood is increased competition from the larger, more aggressive Barred Owl, whose range is expanding into that of the Spotted Owl. Spotted Owls in BC face extremely high mortality in their first winter. The movements of juvenile owls have been tracked by radio telemetry to determine their activity patterns, survival and recruitment rates, and causes of death. As part of this work, the birds are fed mice when they are encountered which has led to consideration of supplemental feeding of juveniles as a potential recovery activity. Two of the three chicks tagged with a radio transmitter in 2003 survived the winter. Of three young tagged in 2004, one is still surviving, one was killed by a Great Horned Owl and the third died of starvation.